A remote coastal town and capital of the province of Aurora, Baler is popular among surfers and tourists for its breaking waves, rugged coastline and spectacular geographic formations. What most visitors may not know about this quaint town, however, is that it is steeped in history. A recent tour around the center of Baler made us appreciate the town’s rich cultural and historical heritage. 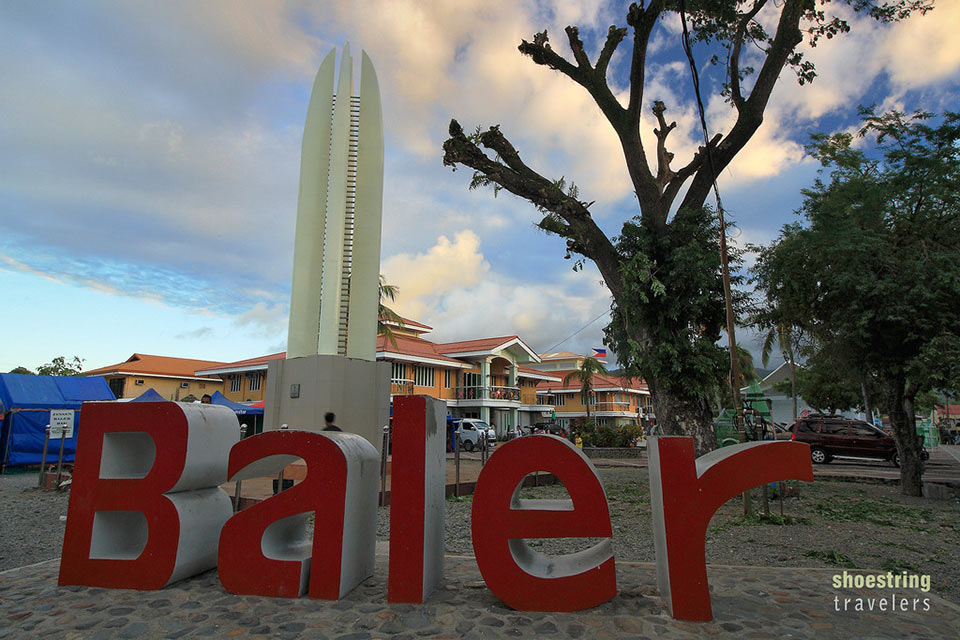 Located some 230 kilometers northeast of Manila, Baler was founded by Spanish Catholic missionaries in 1609. That’s more than 400 years. The Baler 400 Years monument, with four 40-foot pillars each representing 100 years of the town’s history, may be found at the town plaza along Quezon Street. A signage in front of the monument, spelling out the town’s name in big red letters, begs for photo shoot opportunities. 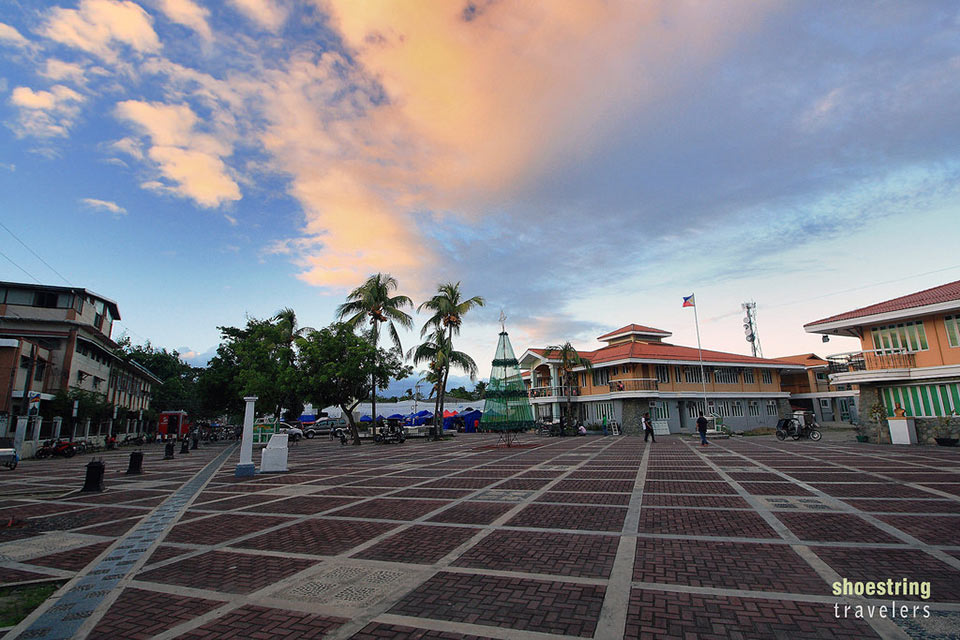 The Siege of Baler Church

At the block opposite the sprawling town plaza is the San Luis Obispo de Tolosa Church, more popularly known as the Baler Church. As with many Spanish-era churches in the country this mint-colored structure has been damaged on several occasions requiring several reconstruction efforts. 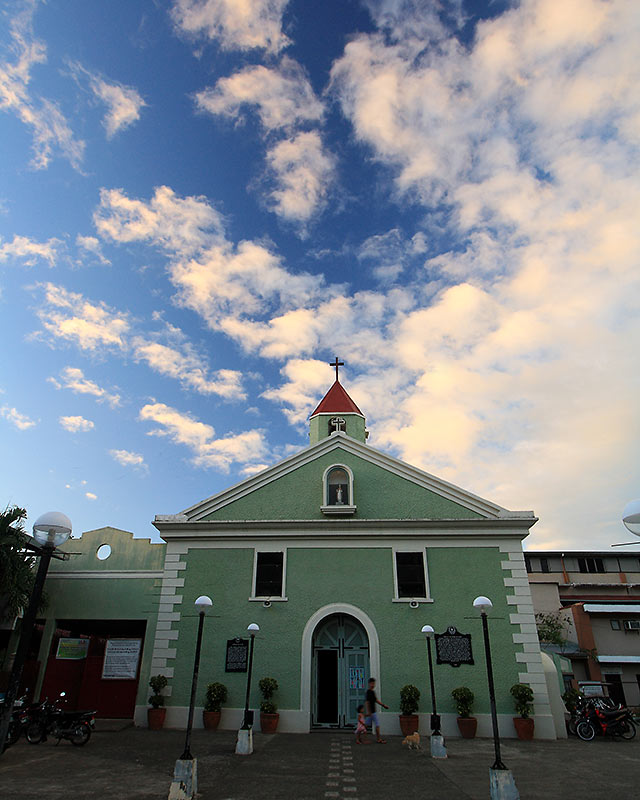 During the Philippine Revolution in the late 19th century, a small Spanish garrison of 54 officers and men was besieged by Filipino revolutionaries inside this church. The siege lasted for almost a year. Offers of peace or surrender were refused by the obstinate garrison, even when they were told that the war was officially over. Only when a Spanish emissary dropped newspapers into the garrison did they finally realize that hostilities were indeed over. The garrison was later honored by both the Spanish and Philippine governments for gallantry. They were the last bastion of Spanish colonialization in the country.

Today countries in the Pacific Rim of Fire have advanced warnings of tsunami and destructive storm surges, giving them ample time to evacuate safely. Such was not the case for the residents of Baler on the wee hours of December 27, 1735 when a tsunami – called tromba marina in Spanish at that time – came without warning and wiped out the entire town along with the lives of most of its citizens within an hour. A few families were able to swim through the raging waters and climb up nearby Ermita Hill to safety. They were the only survivors.

The Tromba Marina sculpture at the base of Ermita Hill today depicts family members holding hands and climbing up the hill with a huge wave below them – a tribute to the survivors. On our third day in Baler we drove up this hill to a parking area for a panoramic view of Baler town and Baler Bay. Higher up from the parking area and viewpoint – 275 steps on a concrete stairway to be exact – is a white cross that marks the highest point of Baler town. We erroneously thought this to be a better vantage point so we huffed and puffed up the hill only to realize that the view at the top was hindered by a dense growth of trees. (At least we got to scale the highest point in Baler.) The panoramas from the view decks near the parking area, however, were good enough. 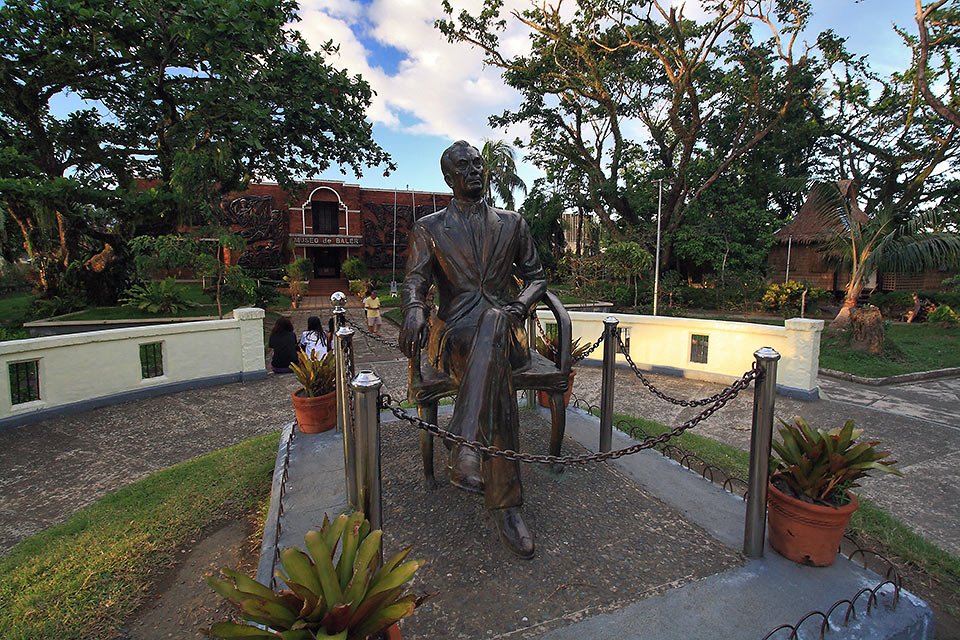 Quezon Memorial Park with Pres. Manuel Quezon’s sculpture. The Museo de Baler and a replica of Quezon’s ancestral house is in the background.

The second Philippine president, Manuel L. Quezon is Baler’s most prominent son. His memory is honored through several landmarks in the town center. Incidentally these and the Baler Church and 400 Years monument are all within easy walking distance of each other. Quezon Memorial Park is along Quezon St. and almost adjacent to the town plaza. A sculpture of Quezon is situated in front of the park. The park also contains a 1937 Cadillac Cabriolet once used by Quezon as well as a replica of his ancestral house.

The Museo de Baler – located inside the Quezon Memorial Park

The Museo de Baler is situated within the park grounds. For a P35 fee we were treated to exhibits of several artifacts featuring the lengthy history of the town and Aurora province (the province used to be part of Quezon province – formerly Tayabas – until its separation in 1979). Particularly interesting are several photos from the Spanish colonial, American colonial and Japanese occupation periods. The museum also houses several paintings, sculptures and other works of art. 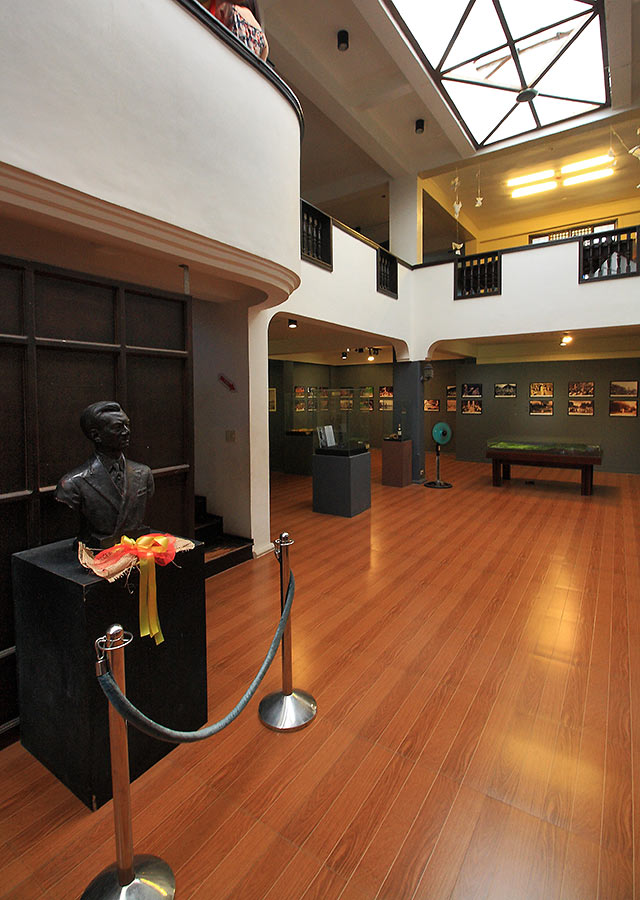 Inside the Museo de Baler

Just across Rizal Street from Baler Church, we headed for the Doña Aurora Quezon house, the birthplace of Aurora Aragon-Quezon, the wife of Pres. Manuel Quezon. We were informed by the staff at Museo de Baler that our P35 entrance fee covers a visit to the Doña Aurora Quezon house. By the time we got there, however, it was past 5PM and the house had closed its doors. We had to content ourselves with viewing the house from outside. The structure is actually a replica of the house of Doña Aurora’s father, Pedro Aragon.

Baler’s Hanging Bridge; the moss-green Tibag-Sabang River is below

It’s not a historical landmark and did not seem to be a scenic attraction, but the steel cable foot bridge over the Tibag-Sabang River was intriguing enough for us to visit. The moss-green colored Tibag-Sabang River empties into Baler Bay just south of Sabang Beach. The Hanging Bridge itself lies at the end of Zabali Road not too far from the town center. It’s a shortcut for local residents wanting to cross over the river to the other side. Vehicles have to do a much longer roundabout route from the town proper to cross the river and get to Diguisit Beach and Dicasalarin Cove on the other side.

Crossing the hanging bridge. The guard rails were absent in 2011.

So why visit this bridge at all? For us it’s just the adventure of crossing such a structure. With the hanging bridge dipping alarmingly to one side – a result, our local guide told us, of a recent strong typhoon – the crossing can be scary for some people. What we later learned was that it was even more dangerous back in 2011 and many would-be crossers freaked out and couldn’t finish the trip. We did get to walk across the bridge until the middle portion of the span from where we got a good view of the river mouth and the sea beyond. There is a scenic attraction here after all – but nothing compared to what we would soon experience as we ventured outside Baler town.

5 thoughts on “Baler: A Step Back Into Time”