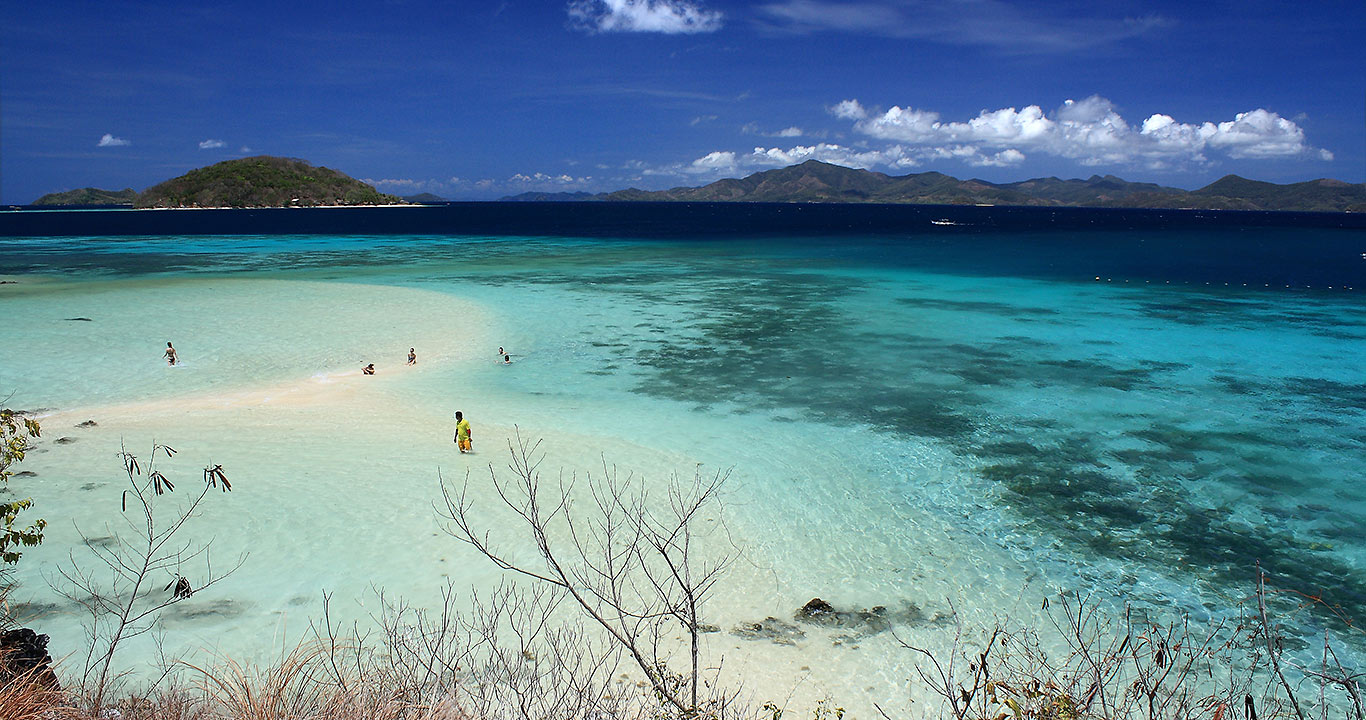 This wasn’t supposed to be. Within minutes of leaving the pier at Coron our motorized outrigger and its 18 passengers and crew were fighting a surprisingly rough sea. On a sunny and almost cloudless morning. In April. After almost an hour of bobbing up and down the turbulent waves we were wondering if the boat might fatally tip over. The crew of our boat had to cut power time and again to minimize this danger, losing speed in the process. Finally, after two hours of a nerve-wracking roller-coaster ride through the big waves we eased into the calm waters of Bulog Dos.

While still a good distance from the beach we could already see that this trip was worth the hassle of braving the choppy waves of Coron Bay. There were two islands to our front; both had stretches of white sandy beach and were surrounded by beautiful, crystal-clear aquamarine waters. We docked at the island that has a long sandbar snaking towards the Malaroyroy Peninsula and the bigger land mass of Bulalacao Island. This island, seen in Google Maps as Cauayan Island, is known as Bulog Dos by the locals. (The other island is named Malacory in Google Maps – Bulog Uno perhaps?) It is just one of the scores of beautiful islands in the Calamianes group in northern Palawan.

After disembarking from our boat we climbed up a low hill to get an excellent panoramic view of the sandbar, the Malaroyroy Peninsula and the waters and surrounding islands of Coron Bay. It was quite a sight, with coral-rich waters of aquamarine, turquoise and deep blue blending together with white sand. From our vantage point we realized that we could walk almost all the way from Bulog Dos to Malaroyroy and the Two Seasons Resort perched on that peninsula by simply following the snaking sandbar. However our boat crew cautioned us not to venture close to the resort.

It was almost high tide when we arrived here but we could still explore the sandbar with its ankle-deep water. The sand at Bulog Dos is fine and creamy white, the waters warm and clear. We couldn’t help but frolic here even under the hot late morning sun.

The northern part of Bulog Dos which faces Malacory Island has a collection of rock formations, making this part of the island a good subject for landscape photography. Few among the five boatloads of visitors bothered to come here, preferring to spend their time at the sandbar instead, so we were free to snap pictures here as we pleased.

Lying several meters off the beach at Bulog Dos and just beyond the layer of sea grass are a variety of colorful corals and other marine life. Our tour guide and boat crew assisted the tourists in our boat, some of whom are non-swimmers, to snorkel and get a good view of the underwater spectacle. The fishes here are not shy and would even swarm around you when you come close.

Bulog Dos was a good start to a whole day of island hopping. It was nearing noon when we were done snorkeling and our boat was soon pulling anchor and leaving for the next island on our itinerary – Banana or Dicalubuan Island – where we would have lunch followed by a short nap under the coconut palms.

It is possible to charter a boat from the port of Coron town to get to Bulog Dos. Travel time is anywhere from 1.5 to 2 hours depending on the condition of the open sea. You can save money, however, by going on one of the tour packages being offered in Coron. One of these packages includes a whole day island-hopping tour of Bulog Dos, Banana Island and Malcapuya Island. The tour operators will put you in a group of 10-15 people per boat, dividing the boat rental cost equally among the passengers. Lunch and snacks are usually included in the package.

For directions on how to get to Coron, Palawan go to this page.

7 thoughts on “Bulog Dos: Island-Hopping in the Calamianes”