It was a perfect sunny morning as our outrigger made its way through the calm waves of Bacuit Bay on the way to our first island destination. From a distance the unusual shape of Dilumacad Island stood out with its tall and massive limestone cliffs and verdant tropical forest. Soon our boat was slowing to a halt and disgorging its 20 passengers onto a beautiful white sand beach.

Dilumacad Island was the first stop of our whole-day island-hopping tour at the tropical paradise of El Nido in northern Palawan, Philippines. Dilumacad is part of a group of islands in Bacuit Bay lying just off the town. Boat operators and resort owners in El Nido town have organized boat tours to these islands; visitors have 4 tours to choose from, each taking them to different parts of the Bacuit Archipelago. These are labeled Tours A, B, C  and D. Dilumacad Island is the first destination for Tour C. 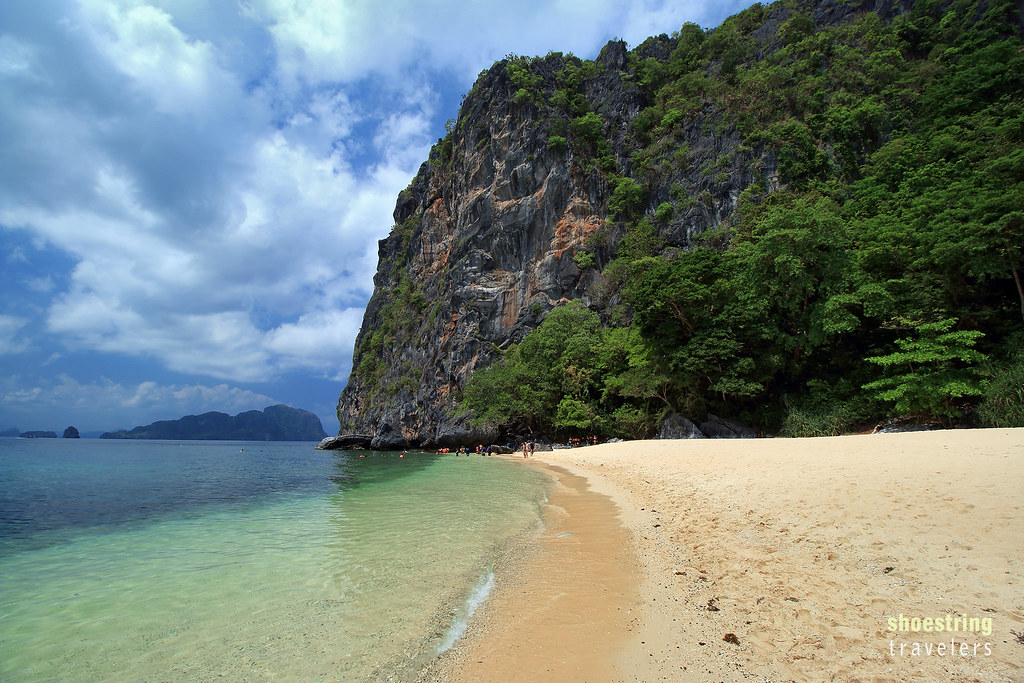 Locals rarely refer to this island as Dilumacad, however. The place is known by its more popular moniker, Helicopter Island, so named because it is said to resemble the shape of a chopper. Some people, however, find it hard to associate its shape with the rotary aircraft. But knowing a little about military aviation, it wasn’t hard for us to see that it does resemble a helicopter – the Chinook Helicopter to be specific.

Besides taking photos, our primary interest here was snorkeling. As in many other beaches in the Philippines, you won’t see a lot of fishes and other marine life immediately off the sandy beach. We had to go out a little further from shore – not too far anyway – where a large number of attractive corals are present. The best spots are those close to the massive limestone cliffs and just before the point where the sea bed drops down abruptly.

Helicopter Island, it turns out, has some very good dive spots. Divers can spot huge schools of fusiliers here. It is said to be the only place that contains all seven species of anemonefish (clownfish) that are found in Bacuit Bay.

On this day, it wasn’t that safe to go out too far from shore as the waves hitting the rocks on the beach got somewhat too strong, providing a hazard for snorkelers. Leo was also a bit more careful after accidentally dropping his camera bag into the water – with a camera inside – while descending from our boat. Fortunately the camera only got a little wet and after cleaning it and later having it checked at a Canon service center, it was still functioning well. (We need to get a dry pack…) After snorkeling we were content to just stay on the beach and admire the view around us.

It would have been great to tour the beach area around the more massive karst formations on the northern end of the island but with four more island destinations for the day we could only spend so much time in each. Time to move on to our next destination…