Located at the foot of Mt. San Cristobal and Mt. Banahaw, Nagcarlan has a relatively cool climate and is surrounded by lush greenery. It is a large municipality in terms of land area (78 square kilometers) but it is not heavily populated; there are less than 60,000 residents according to a 2010 census. We’ve been to Nagcarlan several times now, and while we were initially just passing through en route to other destinations in Laguna or Quezon, we soon realized that there are quite a number of travel destinations in town worth our time.

Back in 2012, this waterfall was our major reason for stopping by Nagcarlan on the way to Majayjay town, also in Laguna. It was a little difficult to find back then and we had to ask local folks about the way there. We ended up driving along a dirt road on the final kilometer or so to the falls towards a parking lot on a forest clearing. Bunga Falls was just a 5-minute trek going down from the parking area.

Bunga Falls is not that large but its twin arms cascading down 10 -15 meters into a deep, dark-green catch basin in the middle of a verdant tropical forest conveys a sense of tranquil beauty. The dark green pool is said to be about 40 feet deep. In our visits here we have seen several guys leaping from the top of the falls straight down into the pool below so it has to be really deep.

Plenty of greenery around the falls

Downstream from Bunga Falls is a shallow stream that winds its way amidst a jumble of huge rocks. As far back as 2012, the locals have built several native-style makeshift shelters along this stream and around the catch basin. In succeeding years we’ve seen almost the entire approach road get paved, stores selling food and souvenirs get added and, to our dismay, a videoke machine set-up in an area just above the catch basin. While the beauty of the falls remains intact, the locals have to be careful how they develop this natural attraction. 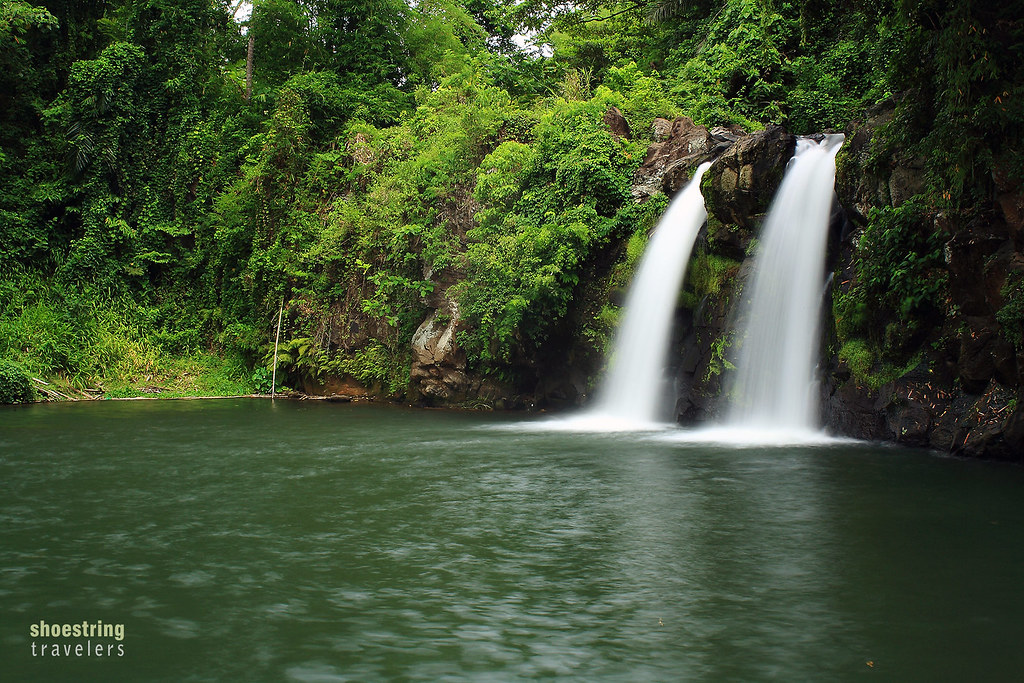 The catch basin at Bunga Falls is about 40 feet deep. 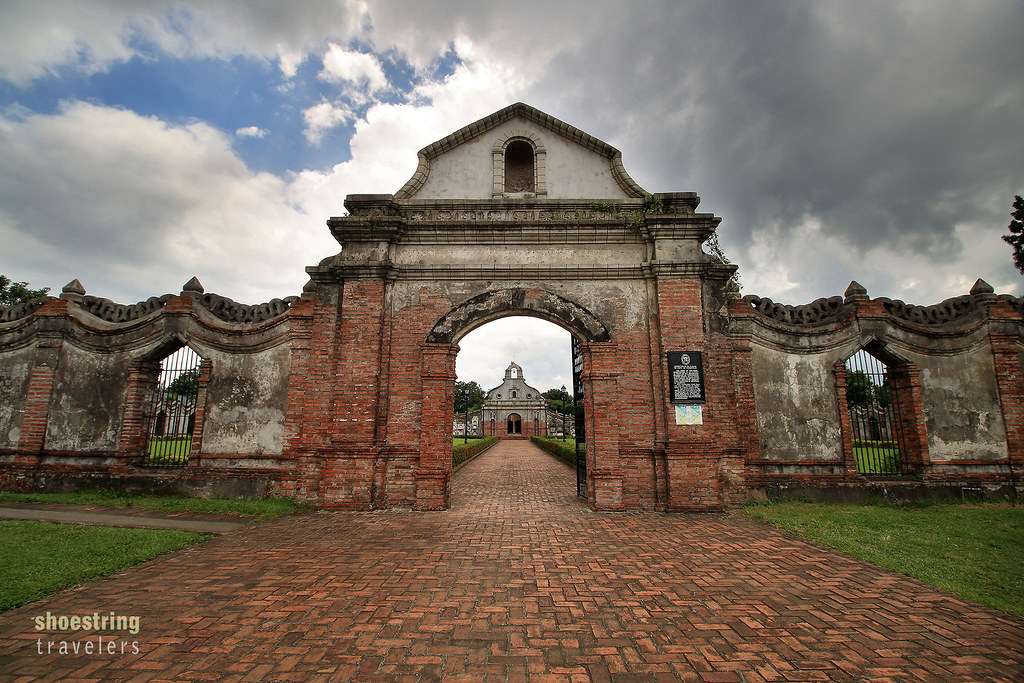 The arch entrance of the Underground Cemetery.

Before Bunga Falls became popular Nagcarlan’s primary tourist destination was the Underground Cemetery. It is easily conspicuous because of its 18-feet high arch entrance beside the national highway leading to Nagcarlan town. Constructed in 1845 by Spanish priests exclusively for Spanish friars and prominent citizens of Nagcarlan, the Underground Cemetery includes crypts located 15 feet below a small chapel inside the cemetery grounds. The cemetery layout reminded us very much about Paco Park in Manila. Past the arch entrance is a brick pathway leading to the cemetery chapel. Manicured hedges of flowering shrubs line both sides of the pathway with beautiful green lawns on each side.

The brick pathway to the Underground Cemetery chapel.

The Baroque-style cemetery chapel used to serve as a venue for final burial rites. Running along both sides of the chapel are 240 apartment-style niches, 120 on each side. The underground cemetery lies below the chapel. We got there by walking down two flights of stairs into a cold, dark chamber containing 36 niches arranged in rows. These niches are supposed to contain the remains of Nagcarlan’s prominent citizens and Spanish priests.

Filipino revolutionaries used the Underground Cemetery as a secret meeting place in 1896 and subsequently used it as some sort of a headquarters during the following Filipino-American War. Guerillas were said to have used the cemetery as a hideout in World War 2. The cemetery was declared a National Historical Landmark in 1973 by presidential decree and ceased to be an active burial location from that time onward.

The chamber below the cemetery chapel contains 36 niches

Nagcarlan has its fair share of resorts that lie along mountain springs and are set amidst the backdrop of a forest or lush green surroundings. Many are located along the national road but wanting some peace and quiet on our second visit here, we settled for Villa Sotoya Resort which is located on an interior road away from the national highway. Villa Sotoya is a sprawling resort built along a slope so it required some walking up and down several flights of stairs. It’s not a place to die for but we did get a new, comfortable room for 7 people with a hut nearby where we could dine and lounge around. At the back of the resort is a cold mountain spring; the resort also has several swimming pools fed by water from the spring.

We didn’t stay around long enough in Nagcarlan to see the San Bartolome or Nagcarlang Church (no wrong spelling here; Nagcarlang is an old name of Nagcarlan’s). Like the Underground Cemetery this church was built by Franciscan friars in the 19th century. There’s also Yambo Lake, one of the Seven Lakes of San Pablo although part of the lake’s banks and about a third of its surface area lie within Nagcarlan. Yambo Lake is also more easily accessible by land from Nagcarlan than from San Pablo.

3 thoughts on “Stopover at Nagcarlan”