August and January are not your normal island-hopping, beach-combing months in the Philippines. Typhoons are the norm in August and January lies smack in the middle of the northeast monsoon season that can make for scary inter-island boat trips due to the strong waves. For some strange reason we ended up visiting Cagbalete, a scenic island in the Pacific Ocean lying off the town of Mauban in Quezon province, during those very same months.

We were first lured into visiting Cagbalete Island in January 2013 after reading about the low tide phenomenon along its eastern shores. When the sea level is at its lowest, the waters on this side of the island can recede to almost a kilometer away from the shoreline, exposing a vast bed of creamy white sand with remarkably long, uniform ripples. For this reason, most of the resorts are located on Cagbalete’s eastern section, facing the vast blue of the Pacific Ocean.

Unfortunately, the sea level never really completely receded during our initial stay at Cagbalete. Tidal variations have something to do with the position of the moon, wind and barometric pressure changes, patterns of tides in the ocean, etc. We happened to visit at the wrong time although the water was shallow and clear enough to let us to see the sand ripples.

Three years later we came back hoping to finally get a glimpse of the exposed sea bed. It was nearing full moon so we thought it would be an ideal time. Unfortunately we ended up having to leave earlier than planned due to a family emergency back in Metro Manila and missing the low tide phenomenon altogether. Instead of seeing a vast seabed of dry sand, this is what we got: 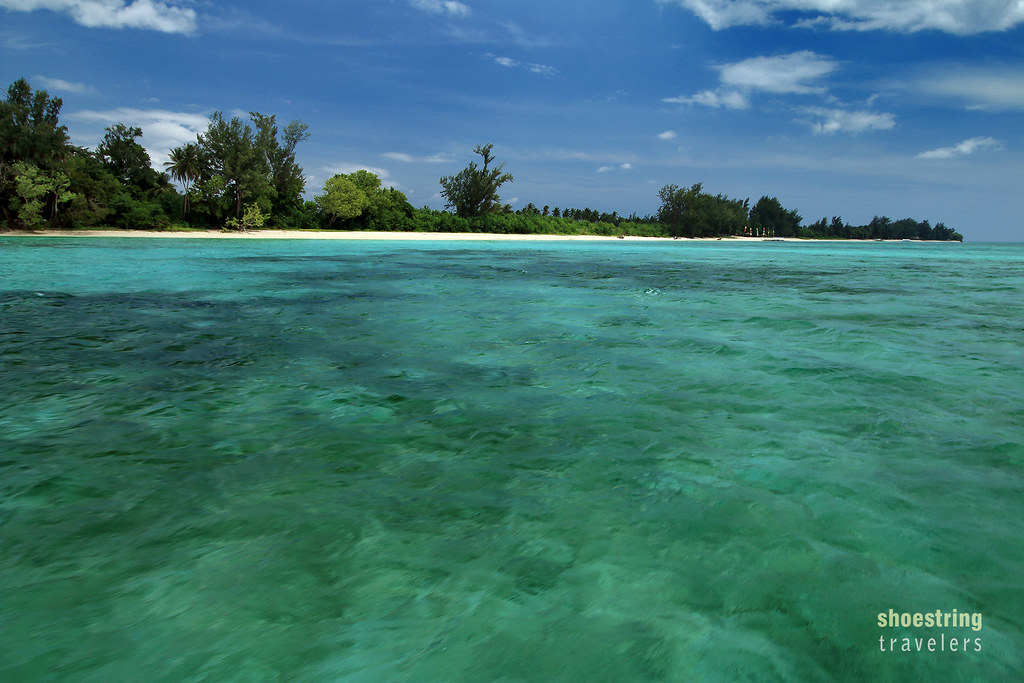 Not bad at all. If there’s one thing that stands out during our return visit, it’s the realization that Cagbalete’s waters remained pristine. Hopefully locals and visitors will help to keep it that way.

Another feature of the eastern side of Cagbalete is its remarkable sunrises. We woke up too late to witness one but since our resort (Doña Choleng Camping Resort) is located on the southern section of the island we could easily witness both sunrise and sunsets. We did get a good sunset view within hours of arriving at the island:

This was virtually unknown when we first came to Cagbalete in 2013 but Rose, our local tour guide and boat operator, suggested we visit the Yang-In Sandbar early in the morning of our last day on the island. This destination is located on the western section of the island facing the Quezon mainland. We arrived on this sandbar with the tide at its lowest level. Before our sights was a vast expanse of dry white sand. It was something we have been waiting to see happen on the eastern side.

Fast forward 3 years later to our return to the same sandbar with friends and relatives. Similar to our experience on the eastern side of Cagbalete, we arrived at Yang-In expecting to see a fully exposed sea bed of white sand ripples only to see this:

We were about to set off for another destination feeling somewhat disappointed until we asked our boat to explore the waters a bit further up north. To our pleasant surprise the aquamarine waters at this portion of the sandbar were crystal-clear. It was also waist-deep for the most part. Succumbing to the temptation of swimming in this vast pool we spent the rest of our morning here.

Getting There and Other Tips

If you’re commuting you can take a Mauban-bound bus (JAC Liner) at the Kamias terminal in Cubao or at the Buendia terminal in Pasay (each has 2 morning trips). Travel time is roughly 5 hours. If you miss these trips you can ride any bus going to Lucena then ride a bus or van at the Lucena Grand Terminal to Mauban. Upon arrival at the bus terminal in Mauban take a trike to the port or pantalan where you may catch a ferry or passenger boat to Cagbalete. At the port you need to pay an environmental fee of P50. The passenger boat fee is P70 for visitors as of this writing. This boat usually leaves for Cagbalete at 10AM and 3:30PM. (Locals say more boats are made available during summer or peak season to accommodate the bigger number of visitors) The boat ride will take anywhere from 45 minutes to an hour. Return trips to Mauban from Cagbalete are at 7:30 PM and 1PM daily.

If going to Mauban by car from Metro Manila there are 3 alternative routes:

Your choice of route will depend on which part of Metro Manila or any other area you are coming from. We chose the first because we were dropping by relatives in Tiaong. The roads here are also wider and better paved than the other routes. At Mauban there are several enclosed parking areas near the port where you can leave your car for a fee. Our resort has a parking area for their guests very close to the port.

Most resorts are located a kilometer or so from Cagbalete’s port. You will either have to walk or hire a small boat to reach your desired resort. Ours – the Doña Choleng Camping Resort – has a shuttle for their guests. Doña Choleng is a relatively new resort, having been open for about 3 years. It was actually just being built when we first visited Cagbalete Island.

For island-hopping tours and additional assistance we recommend that you get in touch with Rose Coliao at 0910-4518108. Rose has been a very amiable host and even prepared food for us during both our visits to Cagbalete. Normally some resorts will have available food but since we arrived at off-peak seasons and weekdays at that, both of the resorts we stayed at could only provide cooked meals from Friday to Sunday. Rose came to our rescue by shopping around and preparing food for all our meals.

5 thoughts on “The Many Faces of Cagbalete Island”