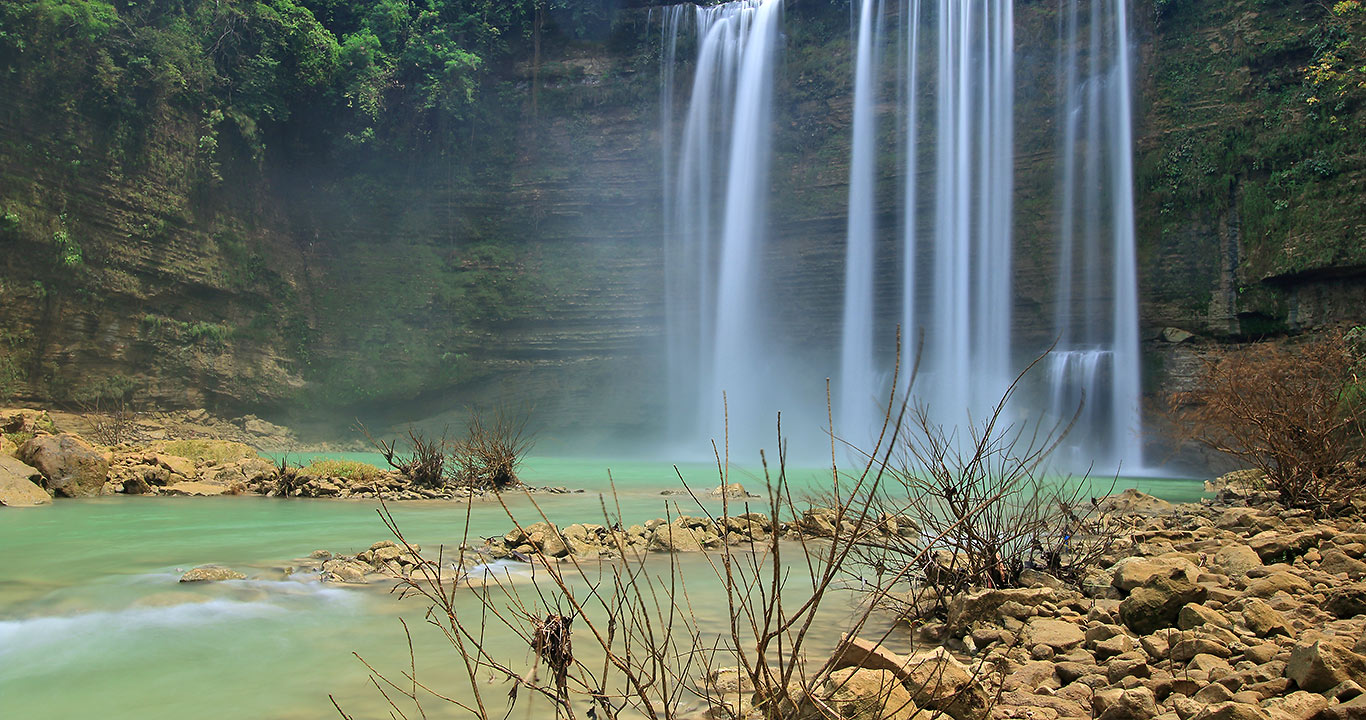 When we first read about this waterfall from a travel blog a few years back we hardly entertained thoughts about visiting it. Not only was it located a considerable distance from Dumaguete City, the nearest city to the falls with an airport, the final leg of the trip was over some very rough roads. But just before another trip to Dumaguete last week we discovered that much of the road going to Niludhan Falls in Bayawan City, Negros Oriental, was recently concreted, making the waterfall much more accessible.

Despite the better road conditions, the trip still took 3 hours – 2.5 hours by bus from Dumaguete City proper to the Paniabonan Junction or Crossing and 30 minutes by motorcycle or habal-habal. (Some parts of the road from Paniabonan to Niludhan Falls are still being repaired.) Niludhan is almost 100 km. from Dumaguete via the Mabinay route and part of it is over hilly terrain. The views along the countryside, however, took our minds off the 3-hour trip.

At Paniabonan, we were told that the two-way habal-habal ride is P400-P450 per two people. After a scenic ride through rolling hills and sugar cane plantations, our habal-habals parked off the road just after a bridge construction site over a river. Our drivers told us that the falls are just a short walk down from the road. The staircase going down to the stream and falls below is cemented and made the descent a breeze – we did it in less than 5 minutes.

Once clear of the trees that blocked part of Niludhan Falls from view during our descent, we could see why these falls are considered a gem of Negros Oriental. Niludhan is both tall and wide – about 25 meters wide and 40 meters deep. Crashing down into a turquoise pool that feeds into a stream, the falls would spray water towards us as the wind intermittently blew in our direction. The spray made taking long-exposure shots using a tripod a bit difficult. Fortunately we had an umbrella to cover our equipment every time the falls blew sprays of water our way. But it made getting a closer, wide-angle shot of the falls almost impossible.

After about an hour of enjoying and trying to capture the spectacle in front of us we headed back to Dumaguete. It was an uneventful motorbike ride back to Paniabonan junction, a quick lunch at one of the carinderias there and a bus ride back to our hotel at Dumaguete.

How to Get There (from Dumaguete)

Niludhan Falls is within the jurisdiction of Bayawan City so some people take this route. From Dumaguete, take a Ceres bus (their terminal is near Robinsons Place mall) to Bayawan City. The trip takes around 2.5 – 3 hours. From Bayawan, hop on another bus bound for Mabinay and asked to be dropped off at Niludhan Falls, which as we mentioned above, is just a short walk from the main road. The buses plying the second leg of this route (Ceres) are most probably non-AC.

Although Niludhan is within Bgy. Dawis in Bayawan, it is actually closer to Mabinay. We prefer this route because it is the shorter one – about 100 km. vs. almost 140 km. for the Bayawan route. Start by taking a Mabinay-bound Ceres bus from Dumaguete and asked to be dropped off at Paniabonan Junction or Crossing (P142 for an aircon bus). The trip will take about 2.5 hours. At Panabionan you can either take a bus going to Bayawan – which will pass by Niludhan Falls on the way – or take a habal-habal ride to the falls. Since the buses aren’t very frequent on this route we chose the habal-habals instead. Normally, the latter would cost P450 per bike for a two-way trip for two persons. In our case and without us really haggling they agreed to P400 for two bikes, one person per bike. Not what we expected, but who’s complaining?

It is best to leave Dumaguete early in the morning so you won’t have problems with getting a ride back to the city. We left our hotel at around 7AM. It’s also best to bring along water and food for the trip although we did get to eat lunch at one of the many eateries at Paniabonan Junction.