The sleepy town of Mauban, Quezon has become popular in recent years due to Cagbalete Island. Unknown to many, however, the inland section of the town is home to caves, forests and – according to the locals – more than twenty waterfalls. Most of the waterfalls have not yet been documented. But at least three are well-known by now and readily accessible. Just recently we decided to visit the most popular and accessible cascade of the three: Dahoyhoy Falls. 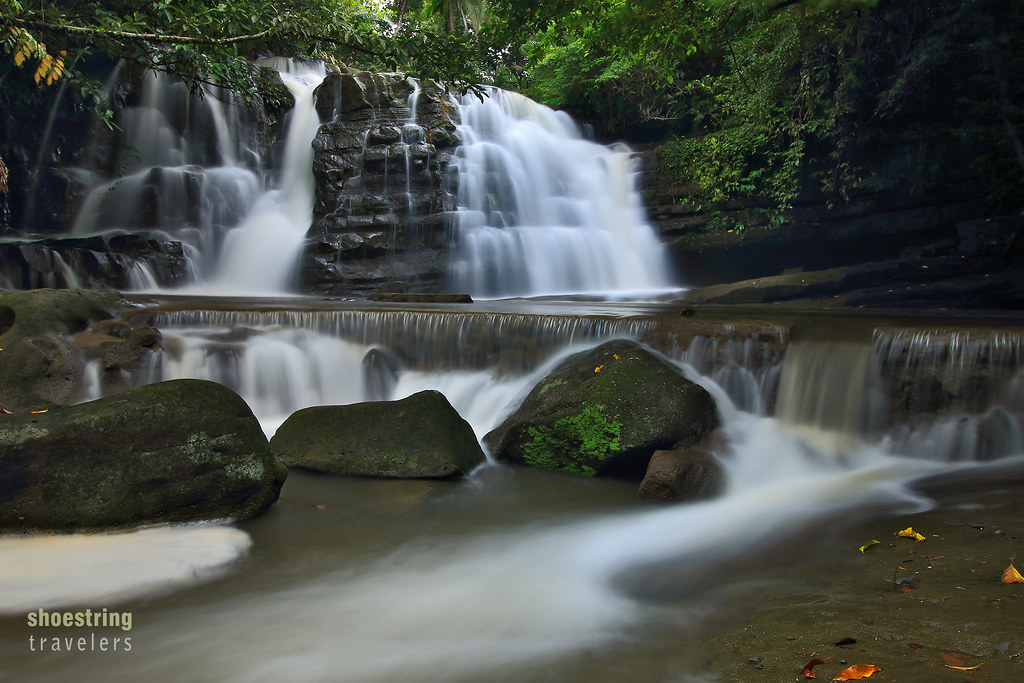 While the drive to Mauban town from Metro Manila normally takes around 4 hours or so, we were visiting Nina’s aunt and uncle who built their retirement home at Hacienda Escudero in Tiaong, Quezon. We stayed overnight at their place before proceeding to Mauban the following day, reducing our travel time by 2 hours. 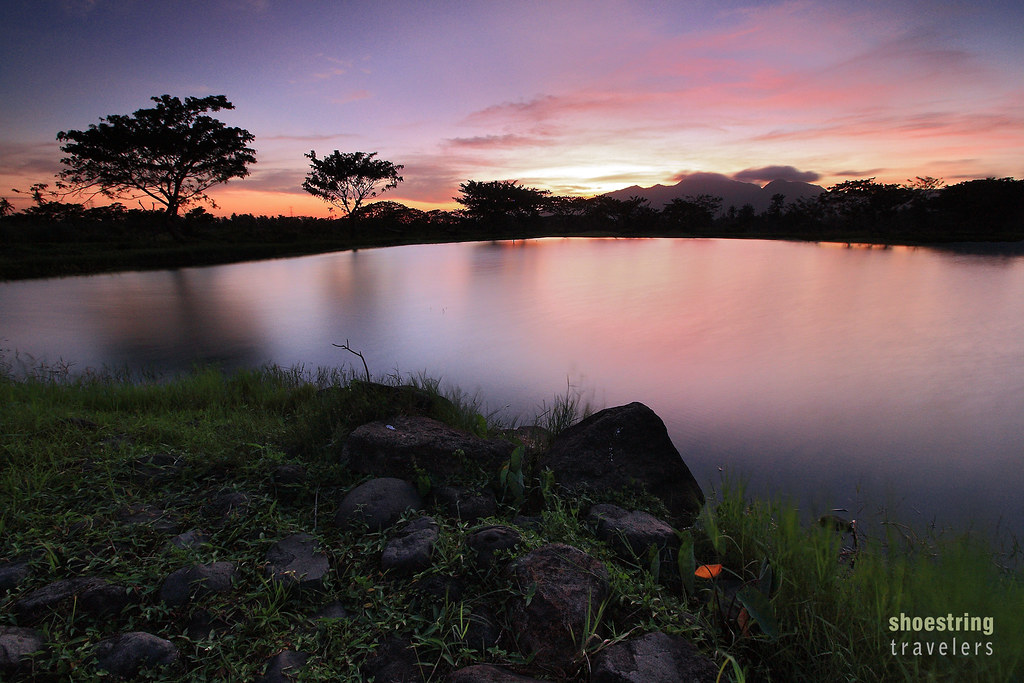 Sunset scene at a pond inside Hacienda Escudero, Tiaong

Dahoyhoy Falls is situated in Mauban’s Barangay Macasin. While one has to trek for about 30 minutes to get there, the trek is rather easy as the pathways are cemented all throughout. You won’t need a guide as well with signage pointing the way to the falls. Our visit took place on a rainy Monday and while the off-and-on rain showers caused some inconvenience it also shielded us from the late morning sun’s heat.

The cemented side walls of the catch basin are barely visible due to the overflow caused by the large volume of water.

November is still a wet month, especially in recent years. It’s generally off-season for travelers but it’s also the time when the volume of water in waterfalls like Dahoyhoy is close to its peak and hence the best time to view them. Water was flowing in copious amounts all over the place, even totally inundating the concreted side walls of the catch basin that were meant to dam the water and create a swimming pool. We were the only visitors on this day and had the falls all to ourselves. Swimming in the catch basin and stream, however, was out of the question. 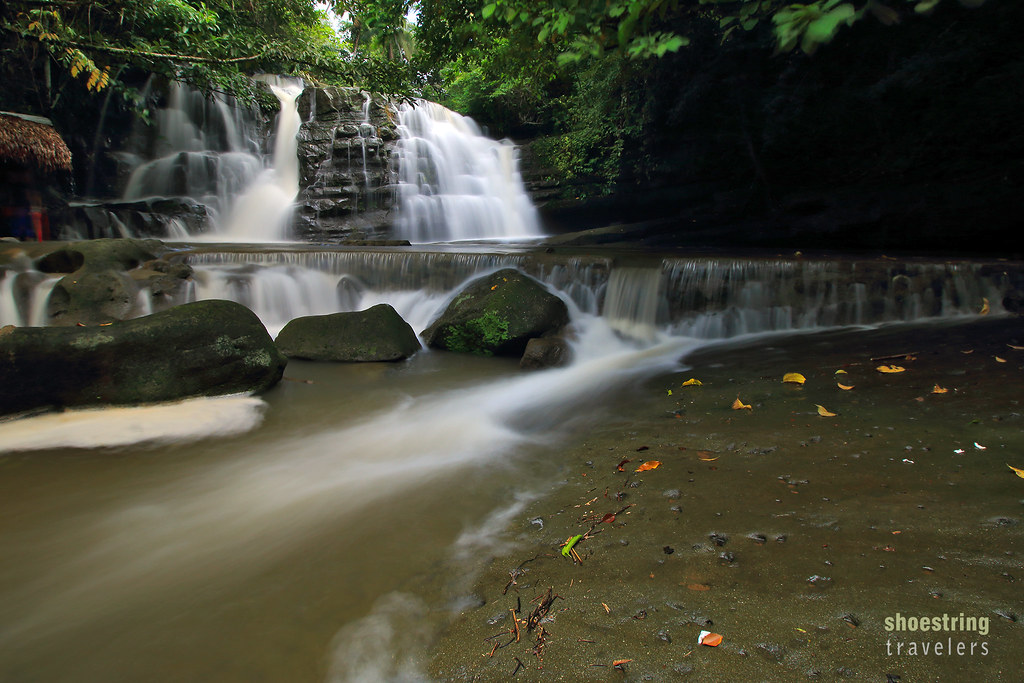 Although the area around the falls has been developed for tourism to a certain degree, the “development” seems to have blended well into the environment including the cemented pathway and the walls of the catch basin. Huge trees around the falls and catch basin provide a good shade. There are also native-style huts and stone picnic tables in the area.

The intermittent rains limited us to a few decent photos; this one was taken just as the rains began pouring down again

Two other waterfalls in Mauban that can be accessed are Hagdan-Hagdan Falls and Alitap Falls. Hagdan-Hagdan Falls, as its name suggests, is composed of a series of short, descending cascades along the whole width of the Balaybalay River. We were thinking about visiting Hagdan-Hagdan but the rains would have made the trek that includes crossing a stream a bit too risky. Alitap Falls is the most laborious of all three falls to reach as it includes a boat ride along a river, a motorcycle or habal-habal ride and a longer trek on foot than the two other falls. But it’s also the most beautiful of the three: Alitap is a series of seven falls that can be reached by ascending a hillside.

If commuting, head for Mauban town proper. You can take a Mauban-bound bus (JAC Liner) at the Kamias terminal in Cubao or at the Buendia terminal in Pasay. Travel time is roughly 5 hours. If you miss these trips you can ride any bus going to Lucena then ride a bus or van at the Lucena Grand Terminal to Mauban.

At the town proper get a tricycle to take you to Dahoyhoy Falls in Bgy. Macasin. The trike will bring you to an interior road just off the main highway from town and drop you off near a basketball court and right at the start of the trek – the first footbridge is immediately visible here.

The hike throughout will be over paved or cemented pathways

If driving, look for that interior road off the Tayabas-Mauban highway on the way to Mauban. This road might be a little hard to spot since the sign pointing to Dahoyhoy Falls at the side of the Tayabas-Mauban highway is facing the opposite direction – on the way out of Mauban towards Tayabas – and there are practically no landmarks. Just ask around for the way going to Dahoyhoy Falls so that you don’t overshoot this road. Drive along this road until you come to its dead end near the basketball court and the start of the trek to Dahoyhoy. The basketball court doubles as a gated parking lot where you can park your car for P50.

The trek includes crossing this hanging footbridge over the Macasin River

The hike to Dahoyhoy will take you past a few houses, rice fields, two hanging bridges, a wooden footbridge and elevated concrete walkways. The hike – about 30 minutes long – is fairly easy since practically the whole trek is over cemented pathways. The latter was built for easy transportation between residences inside Barangay Macasin. You also won’t need any guide as there are signages at various stops pointing the way to Dahoyhoy Falls.