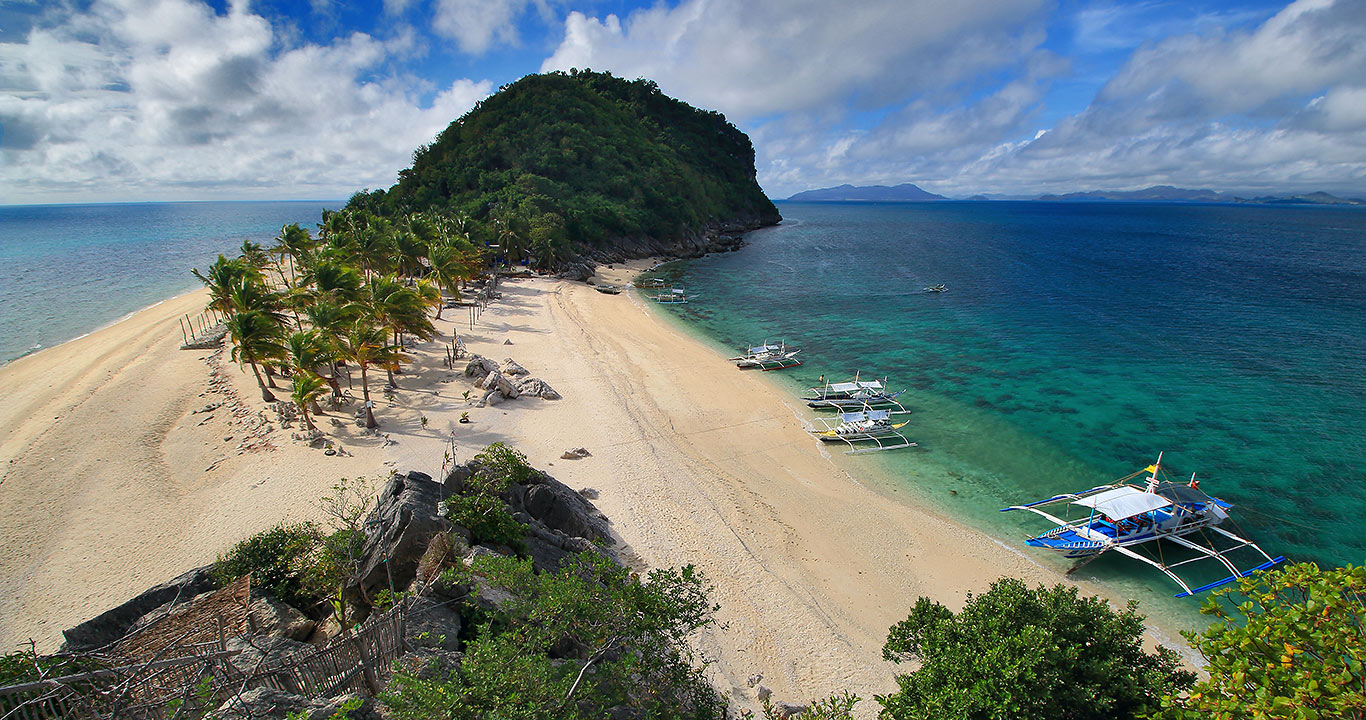 For decades the beauty of the Gigantes Islands off the northeastern coast of Panay has remained hidden. Even as late as the 1990s tourists set their sights on Boracay Island to the west although the nearby island of Sicogon briefly gained fame in the 1970s before the resort there abruptly closed down. It was only around five years ago when we first learned about this little corner of paradise just off the coast of northern Iloilo. The first picture that struck our fancy was similar to the one above – a view of Cabugao Gamay taken from a vantage point on the island.

Cabugao Gamay is part of a small group of islands that make up the Gigantes islands group, arguably the most attractive in all of Iloilo province. Located about two kilometers from the island of Gigantes Sur, Cabugao Gamay is the most photographed of all islands in the Gigantes group. Its peculiar shape – two hills on both ends of the island connected by a splendid white sand beach – and surrounding turquoise waters make it the poster boy for all islands in the Gigantes group.

Our boat is among a small group of tour boats docked on Cabugao Gamay’s western beach.

The island was the second stop on our island-hopping tour arranged by our resort (Gigantes Hideaway Tourist Inn) at Gigantes Norte. Coming over from the Tangke Saltwater Lagoon at Gigantes Sur, we made the trip to Cabugao Gamay in about 15 minutes and landed on the island’s western shores.

Cabugao Gamay is a narrow islet. The white sand western beach where we landed connects to the eastern beach just a few meters away. A small cluster of coconut trees separates the eastern section of the beach from the western part. Before Typhoon Yolanda (Haiyan) struck in late 2013, these coconut palms provided ample shade but the typhoon decimated much of the palm fronds and took out some trees as well. The fronds have started to grow back but not enough for a thick shade during the summer months.

The island has very basic facilities in the form of native huts for overnight stay, a small restaurant and souvenir shop and tables and chairs for dining. (Some tour groups use this island as a lunch stop.) One can just take cover in the restaurant and huts if the sun gets too hot but since we came on a December morning, the little cover afforded by the coconut palms was enough.

At the northern end of the island is a small hill with a view deck that offers a good perspective of the whole island. The trek up this hill used to be a bit of an adventurous climb on rocky ground but bamboo steps reinforced with steel bars have been installed to help make the climb easier. On the hill itself we had an excellent panoramic view of Cabugao Gamay and nearby islands.

Just near the northern hill on the eastern side we noticed several cairns of smooth coral stones. Cairns are normally used in modern times as landmarks but have also been used since ancient times for religious purposes. We read somewhere that locals here believe cairns bring them good luck during sea voyages.

The waters around Cabugao Gamay are excellent for swimming; some corals and sea grass on both the eastern and western beaches also offer snorkeling possibilities. However, we decided instead to snorkel at another destination – Antonia Island – which reputedly has better snorkeling grounds. That doesn’t mean there is no rich marine life at Cabugao Gamay: while we were climbing the hill our boatman harvested some sea urchins and speared what appeared to be a spotted unicorn fish or cowfish. As a result we got to taste fresh sea urchin meat.

Given a choice we would have loved to stay at this island for the rest of the morning but we had three more islands on our itinerary, all easily visible from Cabugao Gamay. After a cold drink at the island’s resto we were off to our next destination.

Cabugao Gamay is on the itinerary of island-hopping tours based on the island of Gigantes Norte. You can travel to Gigantes Norte, stay at one of the resorts there and book an island-hopping trip from there (resorts usually arrange these tours for their guests). For suggestions on where to stay in Gigantes Norte and other travel tips go to this page.

Go to this page for details on how to get to Gigantes Norte.