In the middle of a trip that requires a total of 7 vehicular transfers – a taxi ride starting from home, an 8-hour bus ride, a 2-hour ferry ride, 2 van rides and 2 transfers by trike – you come to a point when you begin to question the sheer absurdity of going through a self-flagellating travel schedule just to cross out an item in your bucket list. And it didn’t end there. The following day after our arrival in sleepy San Pascual town in Burias Island, Masbate we had to negotiate a not-so-calm sea on our way to the islands of Animasola, Tinalisayan and Sombrero. In a boat just big enough for the five of us. These islands had better be good or else. 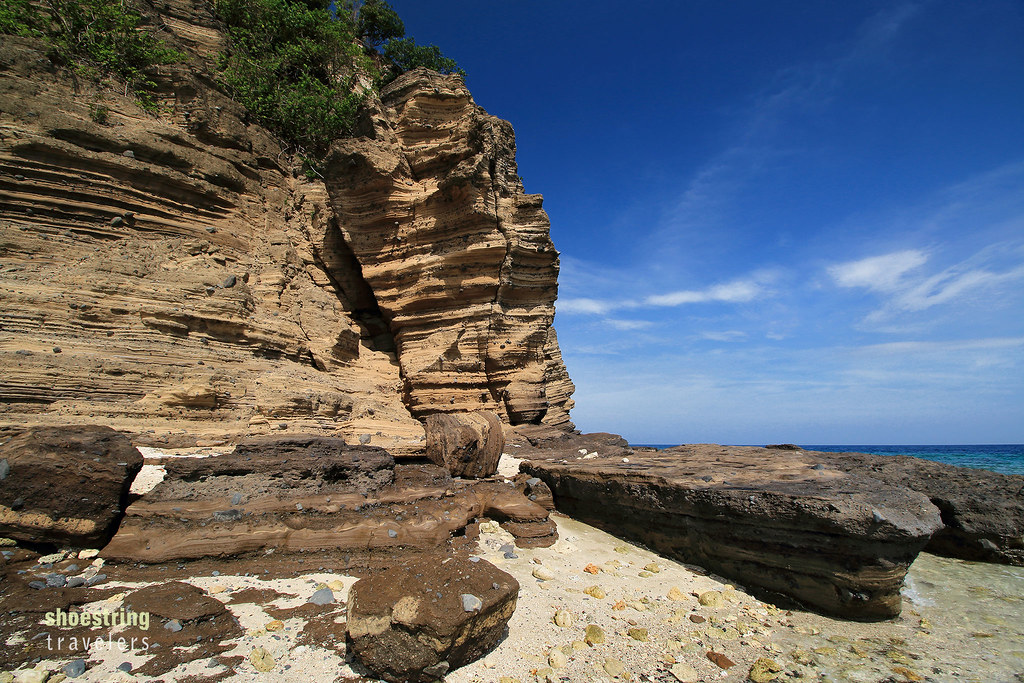 Our first stop – Animasola Island – was already a harbinger of things to come on this particular morning. The island’s fascinating rock formations almost caused us to spend too much time there but we were soon back on our boat for the hour-long ride to Tinalisayan Island. 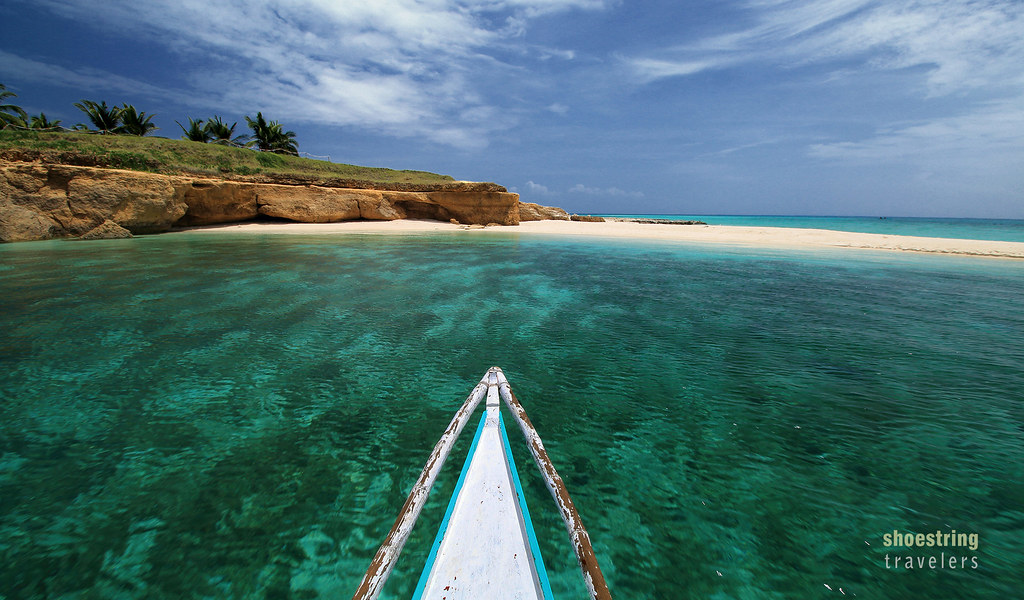 Once our boat neared Tinalisayan, the sight of crystal-clear turquoise waters, an unspoiled white sand beach and verdant coconut palms swaying gently in the wind soon made our travel pains the day before seem like a distant memory. 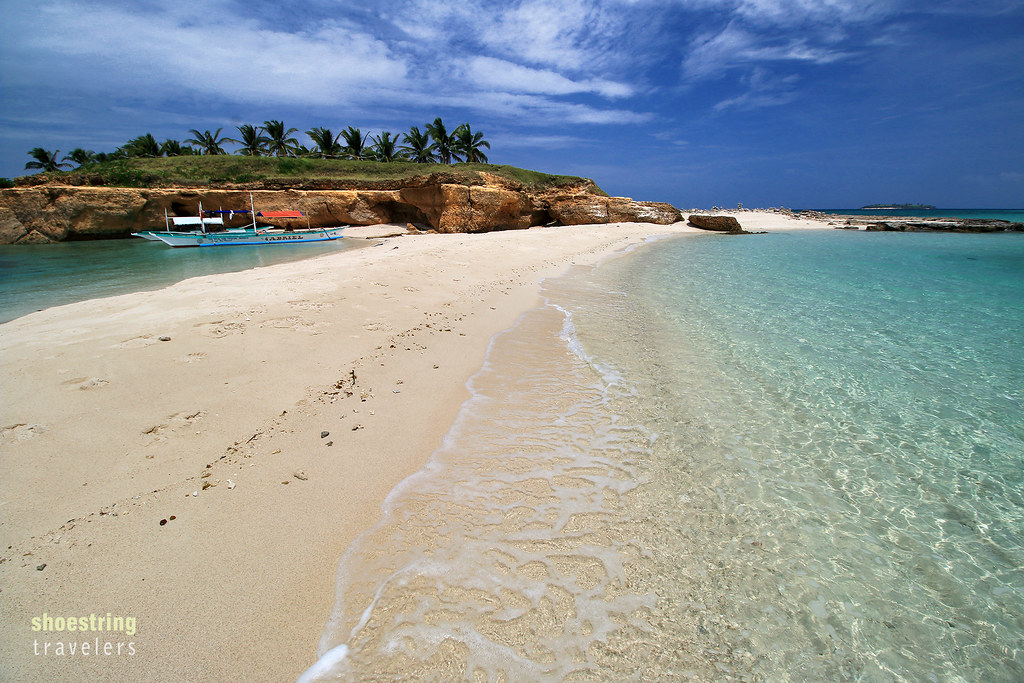 Rust-colored rock mass on Tinalisayan viewed from the far end of the sandbar. Tanguigui Island is in the right background.

Our boat anchored off the white sand beach on the right end of a rust-colored elevated table of rock on the eastern section of Tinalisayan. The white sand stretched southward to form a short but beautiful sandbar. In between this sandbar and Tinalisayan’s island mass is a turquoise lagoon where visitors could swim and snorkel (not that safe for kids though as the sea floor drops down abruptly a few meters away from the sandbar). 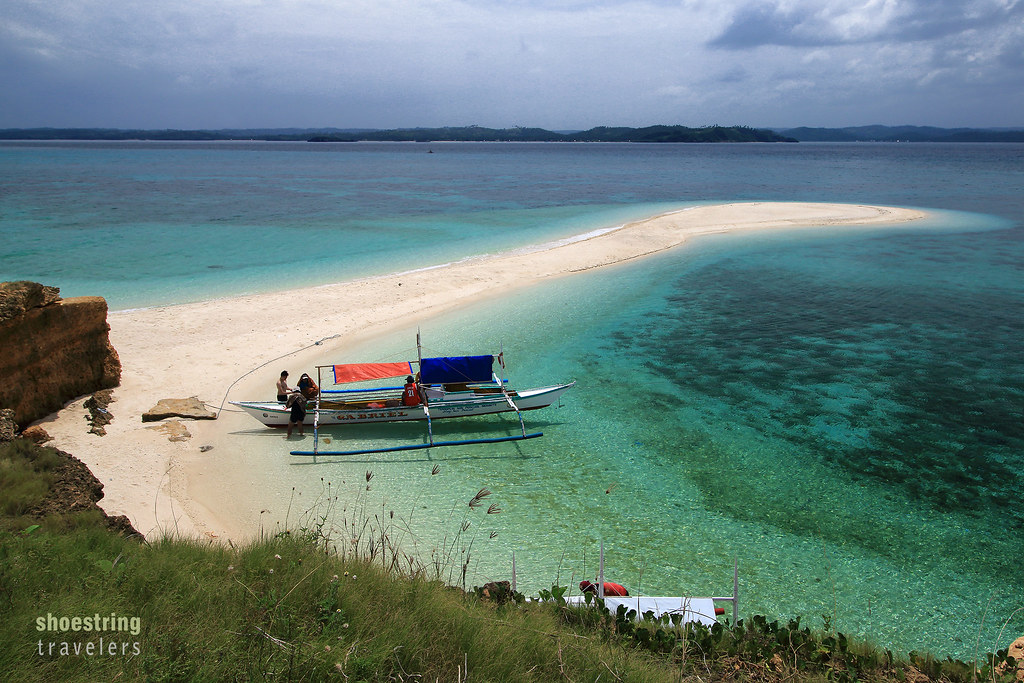 The sandbar viewed from the top of the rock mass on Tinalisayan. 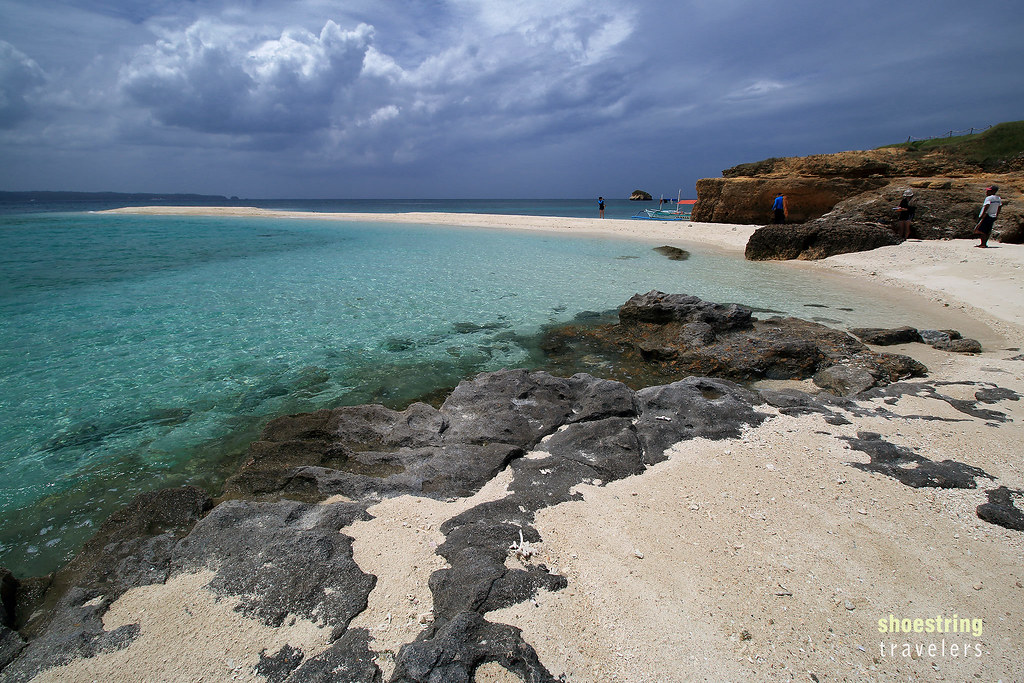 A view of the sandbar from the eastern section of the island; this sandbar continues beyond those rocks on the right for about half a kilometer past the island and was clearly visible until Typhoon Nina struck late last year.

The sandbar continues in a northeasterly direction, snaking its way for about half a kilometer pass the main island mass of Tinalisayan. However, waves spawned by Typhoon Nina in December of last year sheared off a significant portion of the top of the sandbar so that it was no longer visible when we arrived. We could see the lighter color of the water in the wake of the sandbar though, evidence that it’s still there. Had we arrived here very early in the morning it might have been possible to walk over it but we’re not sure. In due time, however, enough sand would have been deposited through wave action to again build up this sandbar. 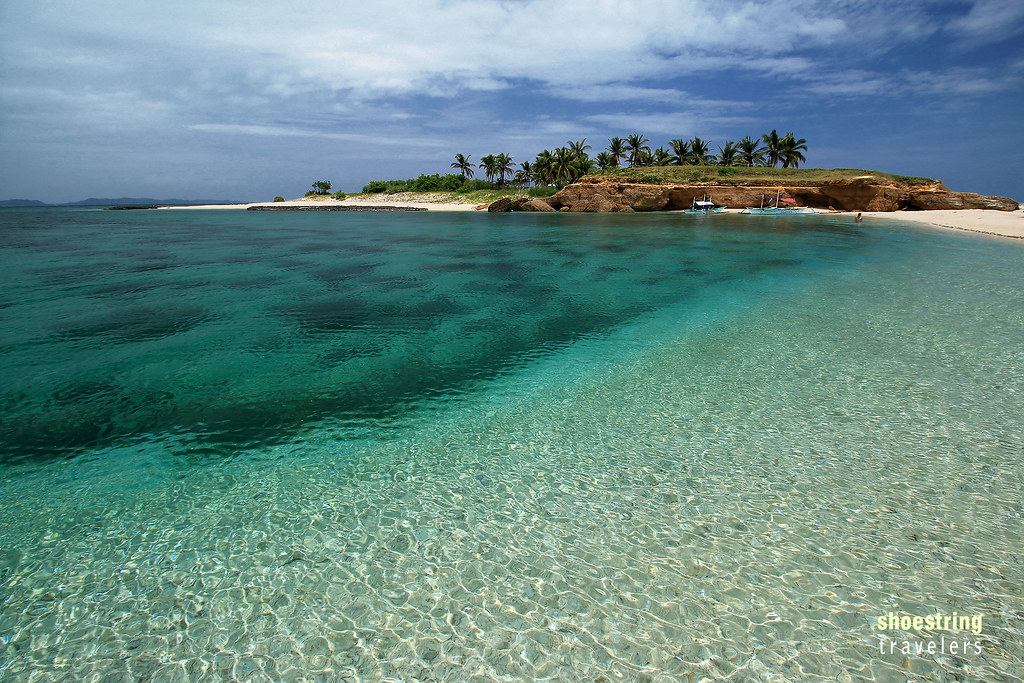 The sea bed slopes down abruptly in the waters adjacent to the sandbar; observe the sudden change in the color of the water 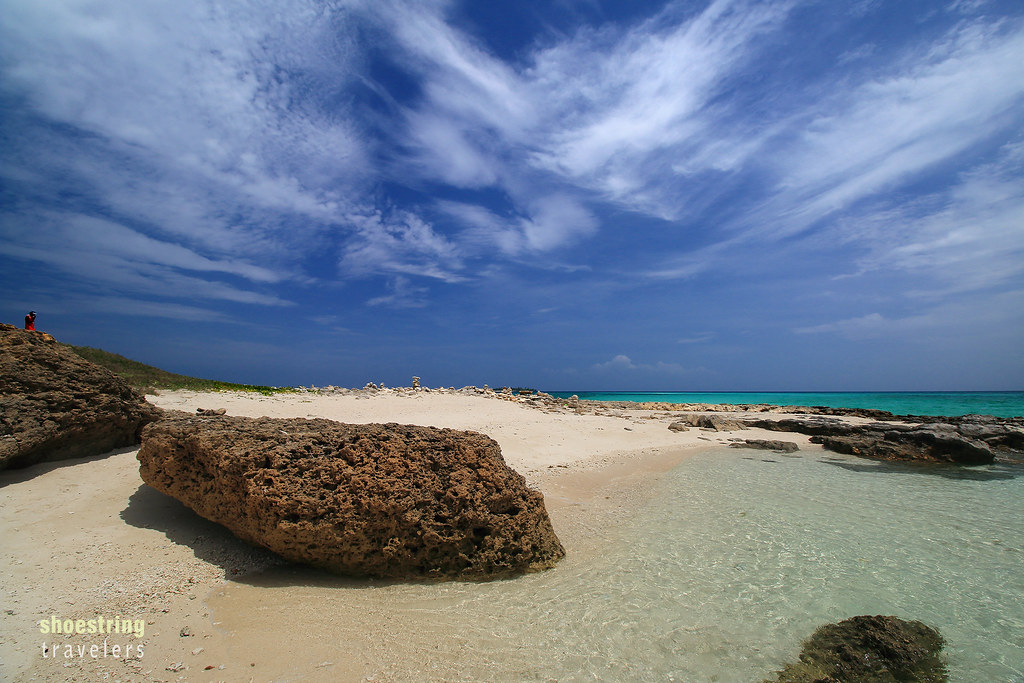 Tinalisayan Island is small and may easily be explored on foot. Scaling the elevated table of rock one can get good vantage views all around. Also at this rise are huts and tables for guests to rest in or dine. Leo got to explore the southwestern section of the island with its lovely, curving white sand beach, turquoise waters with corals underneath and interesting rock formations. The rest of our group opted to feast on coconuts and a shellfish the locals call laswi while resting at one of the huts. 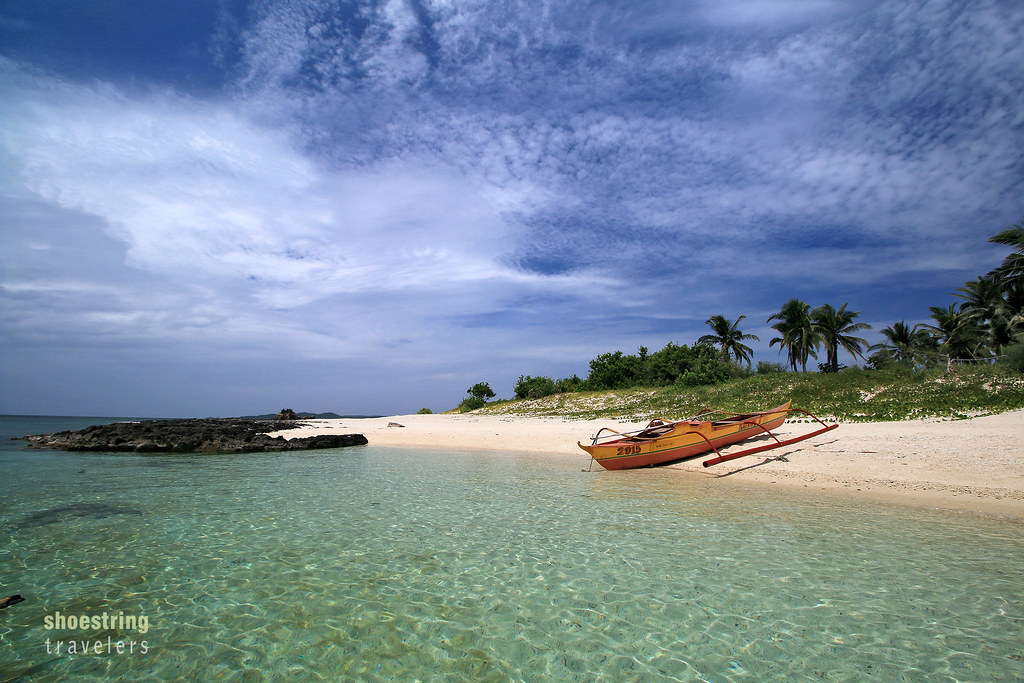 The southwestern section of Tinalisayan with its white sand and crystalline waters. 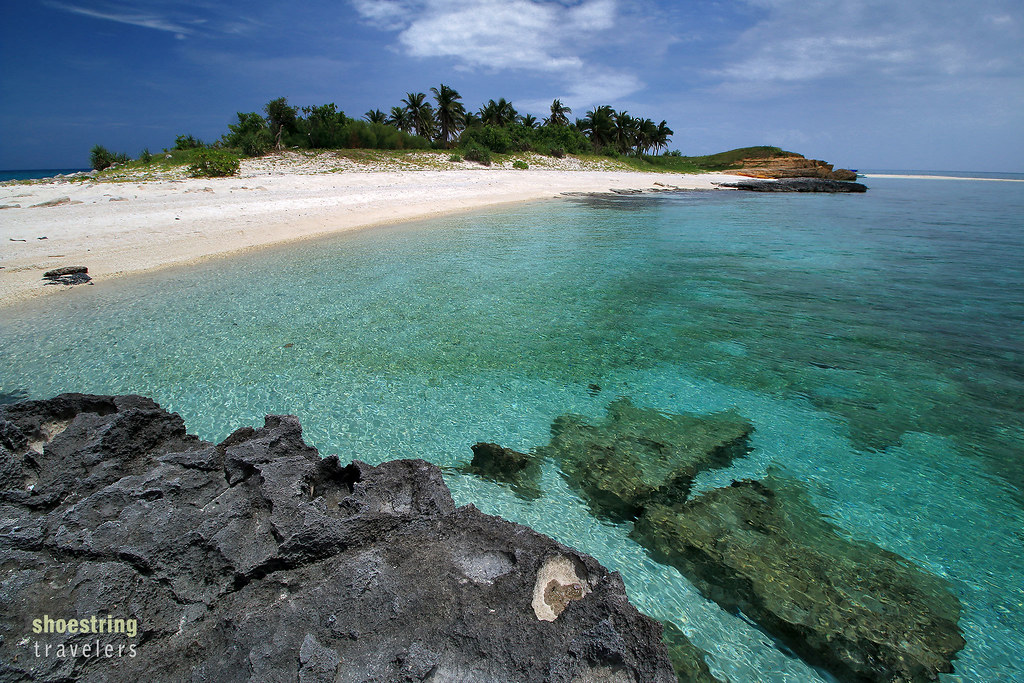 View of Tinalisayan from the southwestern tip of the island

Southwest of Tinalisayan are three rock islets – actually rock outcrops – but these were simply too far away to be explored even during low tide. On the way to Sombrero Island we were able to observe them from much closer.

Looking south from the top of Tinalisayan’s rock; the three rock islets are in the distant background.

In recent years people are discovering a lot of remote paradise-like destinations similar to Tinalisayan and everyone is trying to get to those places before the inevitable tourist crowds (Boracay by the way is a sad example of the latter). In 2011, blogger Claire Raborar-Blaxland – the Lakwatsera de Primera – was accompanied by a GMA 7 TV crew to film her first visit to the island. Tinalisayan and the rest of the islands off San Pascual town soon began appearing on the tourism radar not too long after Claire’s blog post and the GMA 7 documentary. 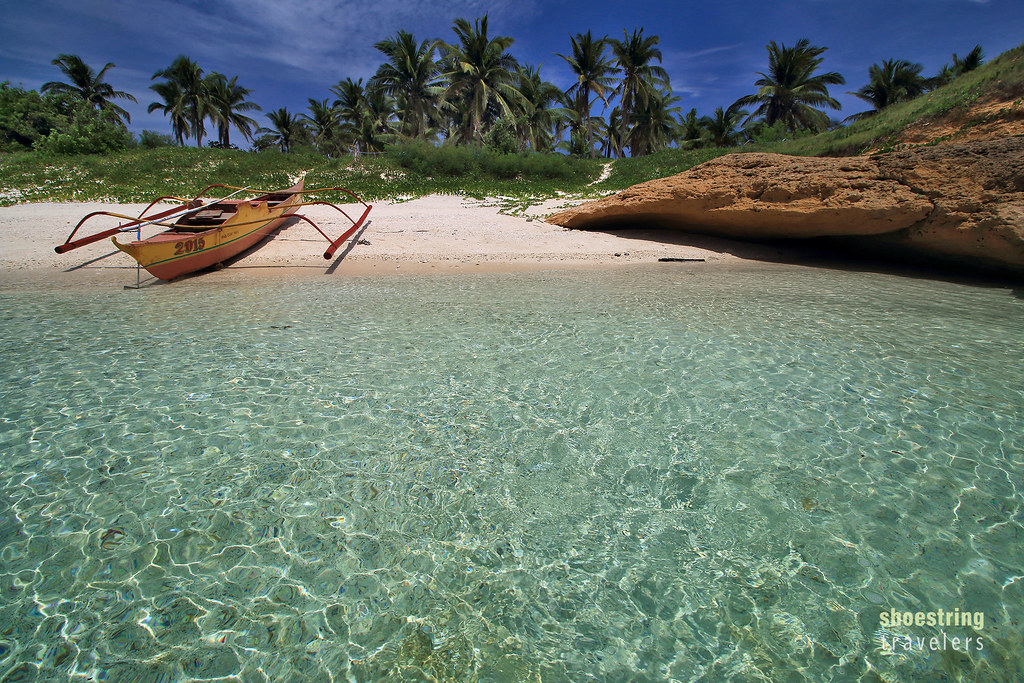 We’ve read Lakwatsera de Primera’s post back in 2012 but it took us 5 years before we finally got to visit Tinalisayan. Quite a long wait. Quite a long journey to get there too. But definitely no regrets.

Tinalisayan and the islands of Animasola and Sombrero (and other islands like Tanguingui and Dapa) may be reached by hiring a boat at the port of San Pascual. From that port Tinalisayan is less than 30 minutes away. In our case we stayed at Atlaza Resort from where we got a boat and where the nearest island is Animasola. The boat rate now is P3,000 for all three islands for a group of about 5 people. You will need to shell out P500 more for an additional island you might want to visit. 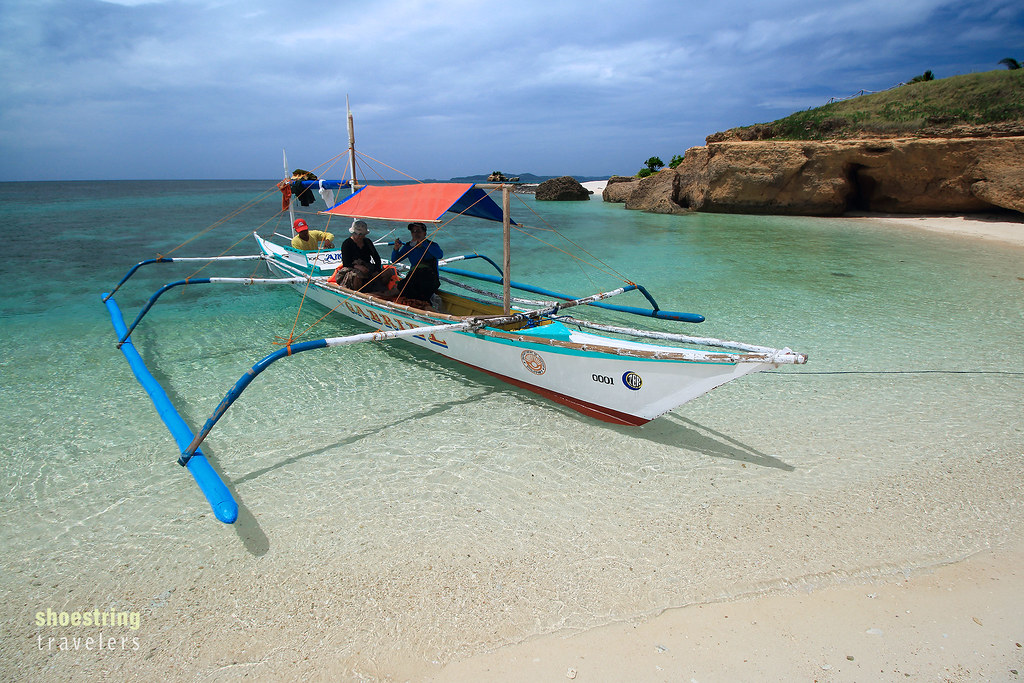 Go here for directions and tips on how to get to San Pascual town.

7 thoughts on “Tinalisayan Island: No Regrets”