We had been traveling on Siquijor’s main roadway, passing magnificent views of the mangrove-lined beaches and marine sanctuaries at Enrique Villanueva town along the way. Now, as our trike made its way to the town of Maria, the highway began veering inland, away from the coast. Not too long afterwards we found ourselves driving through a mini-forest of molave trees, emerging after a few minutes on the gate of a resort back on the coast. Leaving our driver and guide Dondon to park the trike we soon headed off to explore Salagdoong Beach. 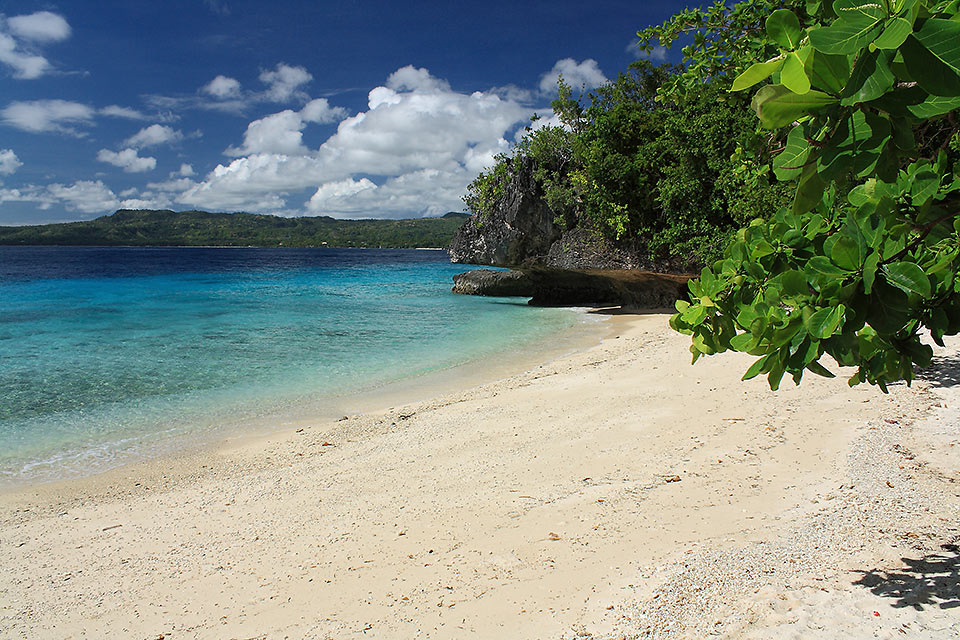 The southern half of Salagdoong Beach.

The resort is a government-run entity complete with rooms, cottages, meeting halls and a restaurant. Salagdoong Beach itself is a popular public beach that locals frequent for excursions. We were understandably worried how it might look like with its popularity and all the development. We were therefore pleasantly surprised that once we looked past all the man-made structures, the beach itself was clean, pristine and well-maintained. 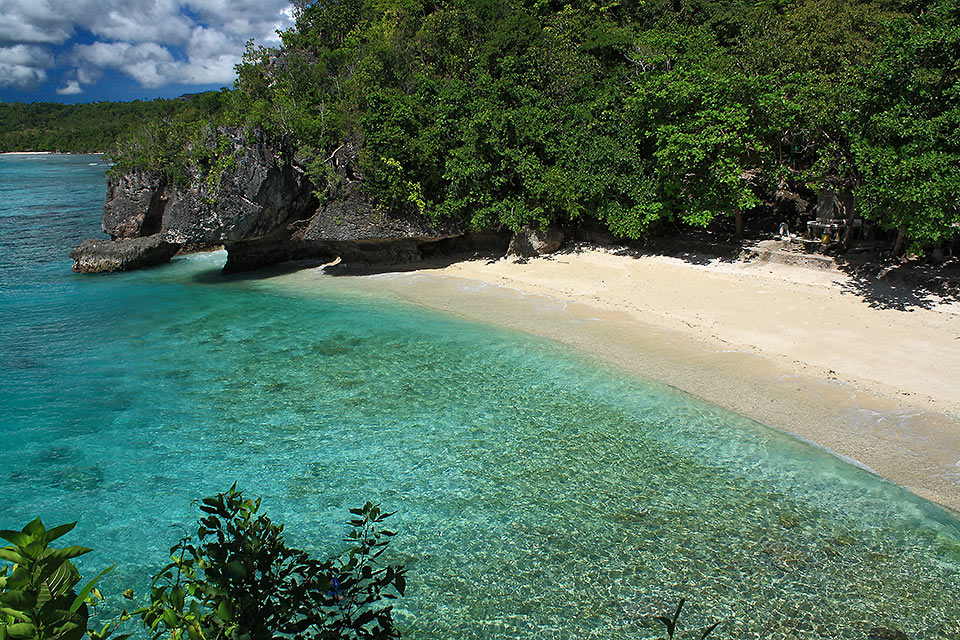 Limestone outcrops at the southern portion of Salagdoong Beach

Like many beaches in Siquijor, Salagdoong is a white sand beach. Huge limestone outcrops are sprinkled over the beach from north to south with a huge karst formation in the middle that effectively divided the beach into two sections. 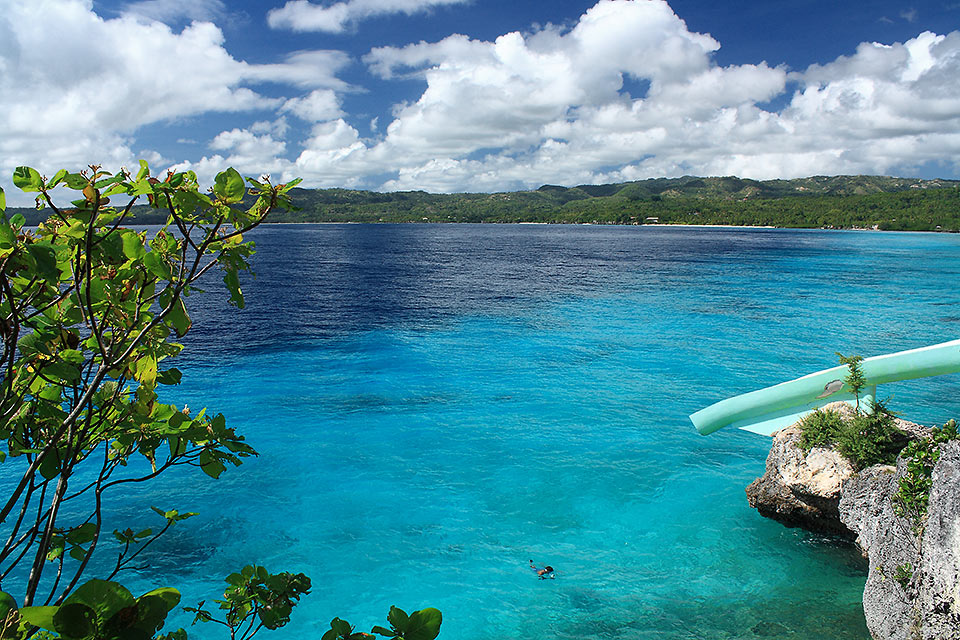 View of Maria Bay from the diving ledge area; the damaged slide is on the right.

What we found most striking about Salagdoong Beach are the surrounding crystalline waters in different shades of turquoise, aquamarine and deep blue and the abundant corals. These same waters hide a variety of rich marine life; divers have reported seeing manta rays and schools of barracuda on occasion here. These waters are best viewed by climbing the top of the limestone rock formation in the center of the beach – while avoiding the two slides and a concrete diving ledge installed by the local government in the same location. (We were really disappointed by these structures but chose to focus instead on the other better features of the beach.)

Limestone outcrops at the southern portion of Salagdoong Beach

A glance towards the coastline along Maria Bay reveals at least 4 other white sand beaches in distant Candaping Bay. We asked out trike driver Dondon if those beaches were accessible. They are not was his answer; to reach those beaches from the main road meant crossing over other people’s property on foot and without any road for even motorbikes to pass through. (Just recently however we discovered that a few beach resorts had opened in that same area – Buco Beach Resort and Aloha Beach Resort to name a few in addition to Princess Bulakna Resort which had been in the area for a while.)

Two white sand beaches are visible in the horizon in this photo taken from the vantage point at Salagdoong Beach.

The southern half of Salagdoong is a white sand cove ideal for swimming and snorkelling while the northern end is dominated by limestone outcrops. During the time of our visit, a resort building near the waterline had just been completed but had yet to start operating. It’s a bit unfortunate that there are also a number of concrete structures here including a sea wall. We would have preferred that the tourism people build the facilities in such a way that they blend naturally into the landscape (like at Kiwi Dive Resort in Larena where we stayed) but at least they kept the waters around Salagdoong relatively pristine.

Right after our time in Salagdoong Beach we got to pass by Maria town proper to observe its Church of Our Lady of Divine Providence with its hexagonal bell tower. We just shot pictures of it outside and did not attempt to see its interior which houses an image of Saint Rita in a black dress and holding a skull. Nina got to do some shopping here and was able to buy some excellent peanut brittle from a lone tourist shop at the poblacion or town center. If you do happen to drop by Maria try the peanut brittle – it’s something to rave about. 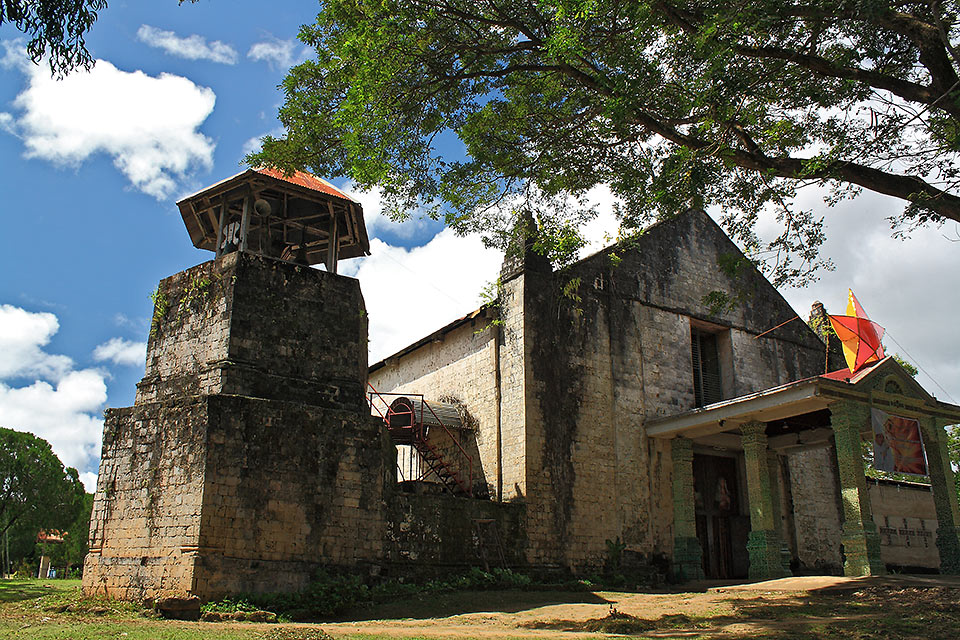 The Church of Our Lady of Divine Providence in Maria’s poblacion.

Maria is located on the eastern side of Siquijor Island and between the towns of Enrique Villanueva and Lazi. The national road that runs along the eastern side is well paved and can take you directly to Maria town proper. To reach Salagdoong Beach, however, you have to take a detour away from the national highway. There is a sign on the main highway pointing the way to Salagdoong Beach via the road that goes through the forest of molave trees. Travel is usually by motorbike or tricycle as with other destinations in Siquijor.

Another beautiful beach in Maria town is Kagusuan Beach which was still deserted when we visited it a few years back. It lies about 16 kilometers south of Salagdoong Beach and close to the boundary of Lazi town.