The rainy season in the Philippines often puts a damper on vacation plans. Over the years we’ve learned to embrace that and to change plans quickly when the weather situation warrants it. So when our plan to go cove-hopping around Mariveles, Bataan’s’ Five Fingers failed to materialize due to the rough seas churned by a tropical storm and low pressure area north of the country, we changed gears quickly and opted for a one-day road trip to Laguna instead.

On our radar for this particular trip was the town of Cavinti, a quiet town in the Sierra Madre mountain range. Its location and geography means that there is a considerable number of tourist destinations in the municipality. Foremost among these is the iconic Cavinti Falls, more popularly known as the Pagsanjan Falls. The falls are actually within the jurisdiction of Cavinti but the boats taking tourists to the falls (“shooting the rapids”) originate from Pagsanjan town. Leo did the “shooting the rapids” boat trip several years ago and saw the main falls so we decided on a more subdued destination – the Bumbungan Eco-Park.

This eco-park had its beginning when the Bumbungan River was dammed at a point upriver from the Cavinti/Pagsanjan Falls. The spillway initially served as a section of the Lumban-Caliraya-Cavinti Road. The water from the dammed river eventually overflowed the road and spillway, forming a short but wide waterfall past the latter. An adjacent bridge was later constructed to route the traffic above and away from the spillway. The Cavinti government then turned the area around the dam and spillway into an eco-park where visitors can have picnics.

The roads going to Bumbungan Eco-Park were well-paved all the way and we had no problem finding it. It was on a holiday when we arrived with a number of families having their picnics on the huts at the end of the spillway and swimming in the moss-green waters of the dammed portion of the Bumbungan River. Some were taking a dip in the falls but it wasn’t long before they left, allowing us to take pictures of the waterfall. A local was patiently fishing downstream beyond the waterfall even as a local lady washed her laundry not too far away. It’s been a while since we’ve witnessed a scene that was everyday fare in these parts. 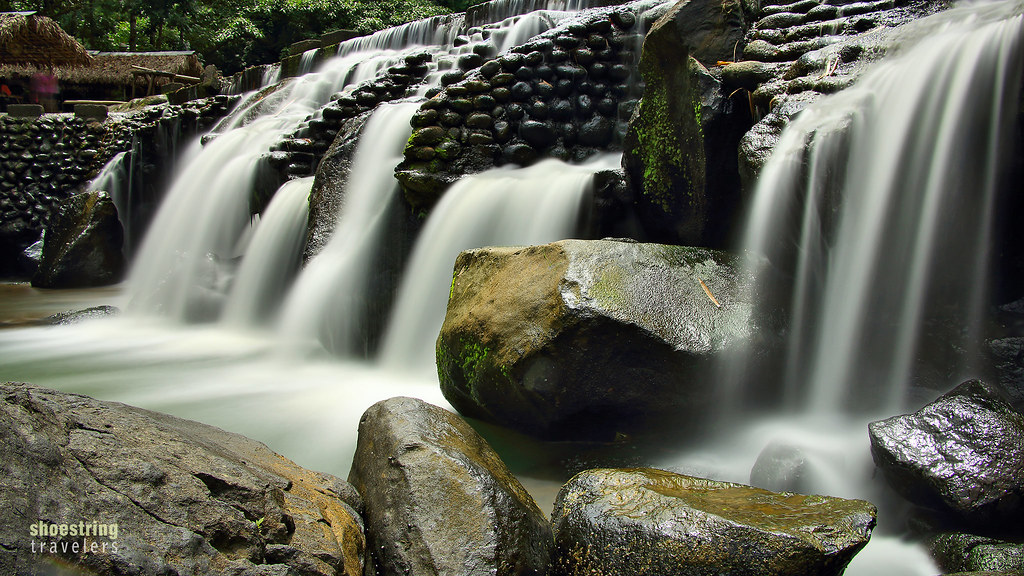 We meant this to be just a one-day road trip so we skipped the picnic and swimming at Bumbungan and drove to nearby Pagsanjan town right after. We had lunch here before but missed dining at Calle Arco, perhaps the most famous resto in town. We weren’t going to miss it this time, especially with stomachs growling after a morning of road tripping.

From outside Calle Arco appeared to be a small, simple sit-down restaurant. Inside however, we discovered that it has three main dining sections and a large patio that could seat several more – with an elevated masonry structure that probably serves as a stage for musical presentations on special occasions. We were ushered inside the prettiest dining area – a pink-colored room filled with the owners’ memorabilia including a collection of tea pots, china and dolls.

Restaurants, however, are ultimately judged by the food they serve, and Calle Arco did not disappoint. Since we were just two on this trip we couldn’t order a wider range of dishes but the ones we got – traditional pinakbet (mixed veges sautéed in shrimp paste and sprinkled with shrimp and pork cuts), paco (fiddlehead fern) salad and fried pork belly – had us craving for more.

On the return trip to the Metro we decided to take the so-called backdoor route through the towns of Lumban, Siniloan, Paquil in Laguna and Pililia, Tanay, Teresa and Antipolo in Rizal. We detoured to Caliraya Lake (still a part of Cavinti but closer to Lumban town) to visit an old destination that we haven’t seen for years.

Caliraya Lake used to be a familiar site for our team retreats, staff conferences and team getaways in the 1990s up to the early 2000s. It’s actually a manmade lake, constructed by the US Army Corps of Engineers in the 1930s and now used as a reservoir for the Kalayaan Power Plant, along with nearby Lumot Lake. As we drove along the lake’s shores, stopping every now and then to take pictures and breath in the cool, fresh mountain air, we noted that the lake has maintained its beauty even with a larger number of resorts and real estate development.

Another familiar destination is the Kalayaan Twin Falls (somewhat of a misnomer as there are as many as 5 waterfalls in this section of Kalayaan town). We also wanted to pay it a return visit but on this day a large number of cars were lined up at the narrow road leading to the entrance. It was a holiday so the falls would surely have filled with visitors.

The last stopover of our one-day getaway was a café we said we would visit again if we had the chance to return. Return we did and we ended up ordering Brazilian coffee, peach tea and a slice of New York Cheesecake at The Daily Beans Coffee Lounge and Restaurant along the national highway (Manila East Road) in Pililla.

Traffic was bad along the last stretch of our ride back home – it has always been this way at the Ortigas Avenue Extension in Antipolo-Cainta. It was also raining heavily by the time we got there, further making the traffic situation unbearable. But that snag didn’t prevent us from savoring our one-day getaway.

We got into a conversation with tourism people at the Bumbungan Eco-Park and learned about some destinations in the town that are just becoming popular. We’ve known about the Cavinti Underground River and Caves Complex that has become popular for its stunning rock formations (there are more than a hundred caves in the area) since 2014. But now tourists can rent a 4×4 vehicle to save on walking time to the caves and also make it to a jump-off point to the newly discovered Cansuso Falls. If it’s more waterfalls you are after, the town also has the Sumucab Twin Falls, a remote but beautiful waterfall reachable by a moderately long hike.

3 thoughts on “Cavinti: Getaway for a Day”