It’s not often that we travel for more than two hours just to savor freshly caught seafood. The coastal town of Real, Quezon is one of those rare exceptions. Its proximity to Manila and the variety of attractions it offers besides the seafood – pristine waterfalls, lush forests, fast-moving rivers for white water rafting, a coastline of rugged beauty and the raging swells of the Pacific for surfing – has lured us often to this place when we wanted a quick and easy getaway.

Real lies between the hills of the Sierra Madre and the Pacific Ocean and getting to town means a pleasant drive or commute up hilly terrain past pleasantly green surroundings. You realize you’re in Real town proper when you leave the hills behind and begin driving down a coastal road.

Our latest visit to Real was part of a trip with friends to Tiaong, another town in Quezon. Since we had to be back in Tiaong by sundown our choice of attractions to visit was quite limited. We decided to head to Balagbag Falls, one of the most accessible waterfalls in Real. We’ve been here twice before but most of our friends have yet to see it. 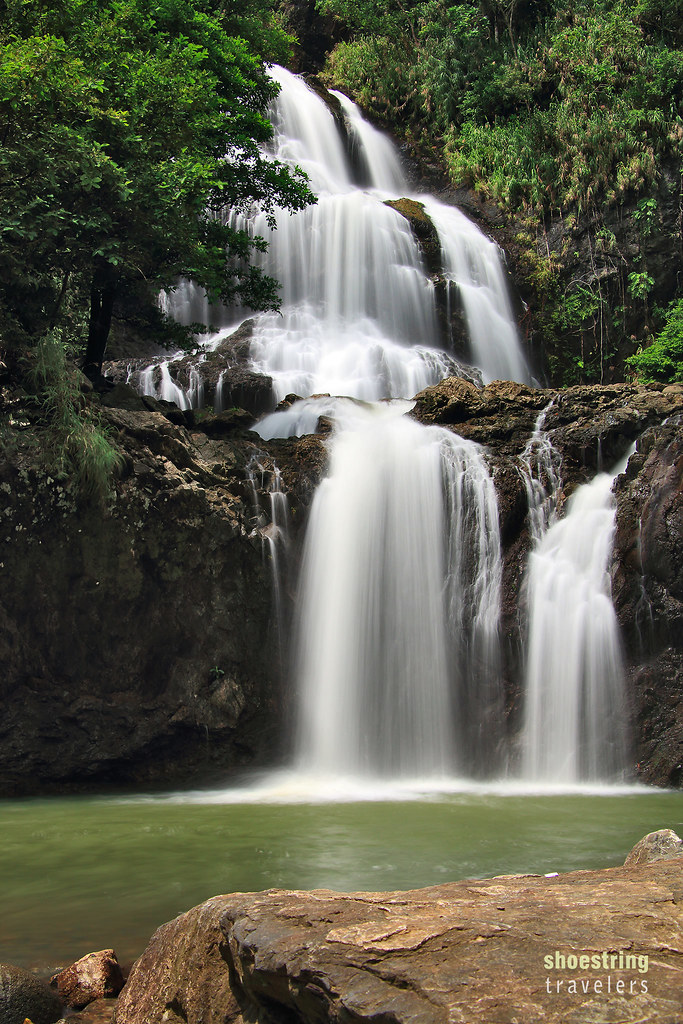 Balagbag Falls after the rains

Getting to Balagbag is a breeze. We detoured from the main road that led to Real town proper just before the bridge over the Tignoan River and the Pacific Recreation Kamp and on to the Real-Mauban Road. This road is still being constructed but that section leading to the entrance to Balagbag Falls is fully paved. Leaving our vehicles at a parking area on the side of the road, we took a short and easy 3-minute hike to Balagbag. 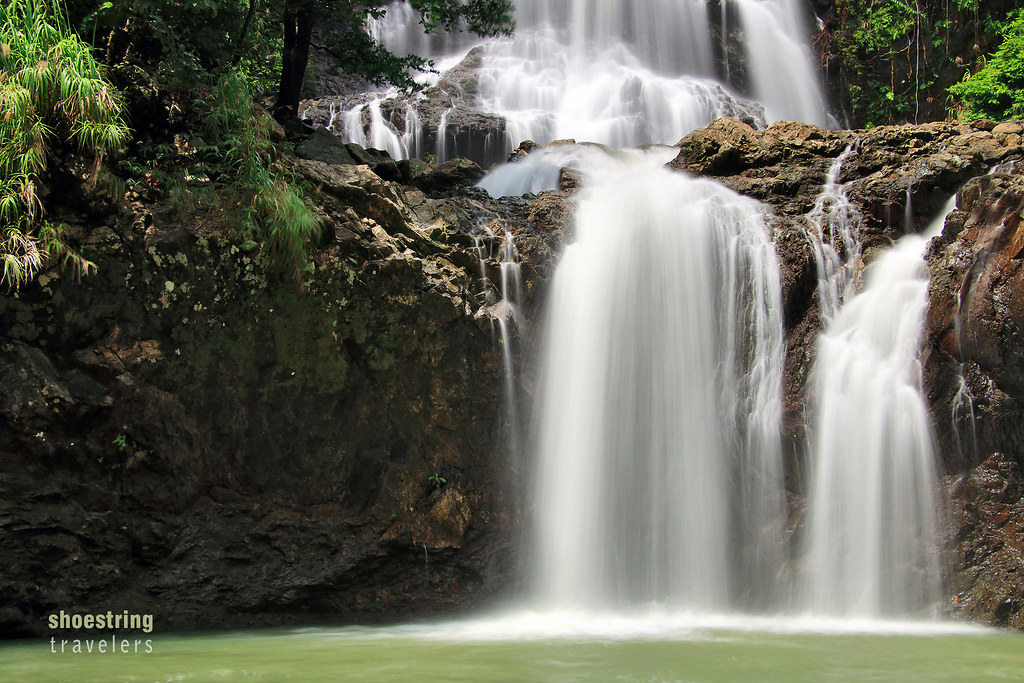 The first tier of Balagbag cascades down into a deep pool; the water flow during our latest visit was the strongest we’ve yet seen in all our visits here. It can be reduced to an unremarkable trickle during the hot and dry months.

Balagbag is a two-tiered waterfall. The lower tier about 20 feet in height and cascades into a moderately deep catch basin. The upper tier is much taller at perhaps about 100 feet but its catch basin is much shallower than the lower basin. A series of stone steps leading to the upper catch basin has been carved into the rock to the left of the lower tier. Leo climbed up the stone steps to get to the level of the second tier for some photos but the rocks were just too slippery at the top (it had rained earlier that morning) and the water flow too strong to proceed further with the camera gear in tow.

Getting to the second tier on this day was a bit risky after a heavy rain earlier in the morning here.

We had hoped to visit Nonok Falls which is just a kilometer away from Balagbag Falls – the distance might even be less now that the road leading to Nonok Falls appeared paved from our vantage point. It’s not as tall or as beautiful as Balagbag but is more ideal for bathing. But we didn’t have enough time on this day. Nonok and many other waterfalls in Real would have to wait. (There are actually 8 other known waterfalls in Real as of this writing. The most accessible is Cawayan Falls –a series of relatively small waterfalls in Barangay Cawayan. The others may be found in the forests and hills above Real and with such names as Bagombong, Malalago, Kinamliman, Tipuan, Pinagminahan and Ngabngaban.)

This was our main reason for coming here and Real certainly did not disappoint. No fancy restaurants here but a seafood market along the main road to Infanta at Barangay Tignoan supplies a variety of seafood straight from the source. The catch is more plentiful during summer but even during this rainy season there was still plenty to go around. The catch is scarcer during the amihan (northeast monsoon) season or during stormy weather.

Groupers and tuna are common at the stalls in Tignoan, Real

Groupers (local name: lapu-lapu) come in a variety of colors. Most of these fishes come from the Polilio group of islands nearby where coral reefs abound.

Shrimps, crabs and even eel are sold with the fish here.

It’s like an aquarium here with all those colorful fishes – rabbitfish (local samaral), more groupers and goatfish

We shopped around for shrimps, blue crabs and groupers and had them cooked at one of the adjacent stalls. The shrimps and crab were steamed – they were so fresh that simply steaming them was enough. The groupers were cooked in a sour soup (sinigang in the local jargon).

More crabs and a grouper head in sinigang (sour) soup

We also had more grouper and some chunks of blue marlin (actually broadbill swordfish) fried to take home as well as more steamed shrimps. The fish here – whether fresh or cooked – costs just a fraction of the same in Metro Manila so we simply couldn’t resist bringing more with us back home.

On the way back to Tiaong we stopped to briefly admire the rugged coastline of Real. Unfortunately Leo left his camera back at the seafood stalls and had to drive back to retrieve it – thereby missing taking pictures of the coast. And then it was on to Tiaong but not before dropping by Aling Taleng’s place in Pagsanjan for a halo-halo dessert.

If you are taking public transportation the option with less transfers is to take a Raymond bus that goes to Infanta, Quezon. The terminal for Raymond buses on this route is located at Legarda St., Sampaloc, Manila. This bus will pass by Real via the Siniloan-Famy-Real-Infanta Road. This “backdoor” route passes through Antipolo-Teresa-Tanay towards Famy and Siniloan, Laguna. We’re not sure about the total travel time but it could be anywhere from 3.5 to 5 hours depending on the traffic or time of day.

If you’re coming from the southern part of Metro Manila it might be better to head up to Santa Cruz. There are several buses in the metropolis going there including Green Star and DLTB that have terminals in Buendia, Pasay City. At Sta. Cruz ride the jeepney bound for Siniloan, and at Siniloan get a jeepney bound for Real.

If taking a private vehicle the routes are roughly the same: take the backdoor route through Antipolo-Teresa-Tanay-Siniloan. This route is pretty much straightforward. At a junction of the Manila East Road (the road running along the northern portion of Laguna de Bay from Taytay) in Siniloan turn left towards Real-Infanta. Travel time is normally three hours. The other route, as with public transportation, is through the South Expressway to Calamba, Laguna, then Santa Cruz and on to Famy. At Famy look for the road junction going to Real.