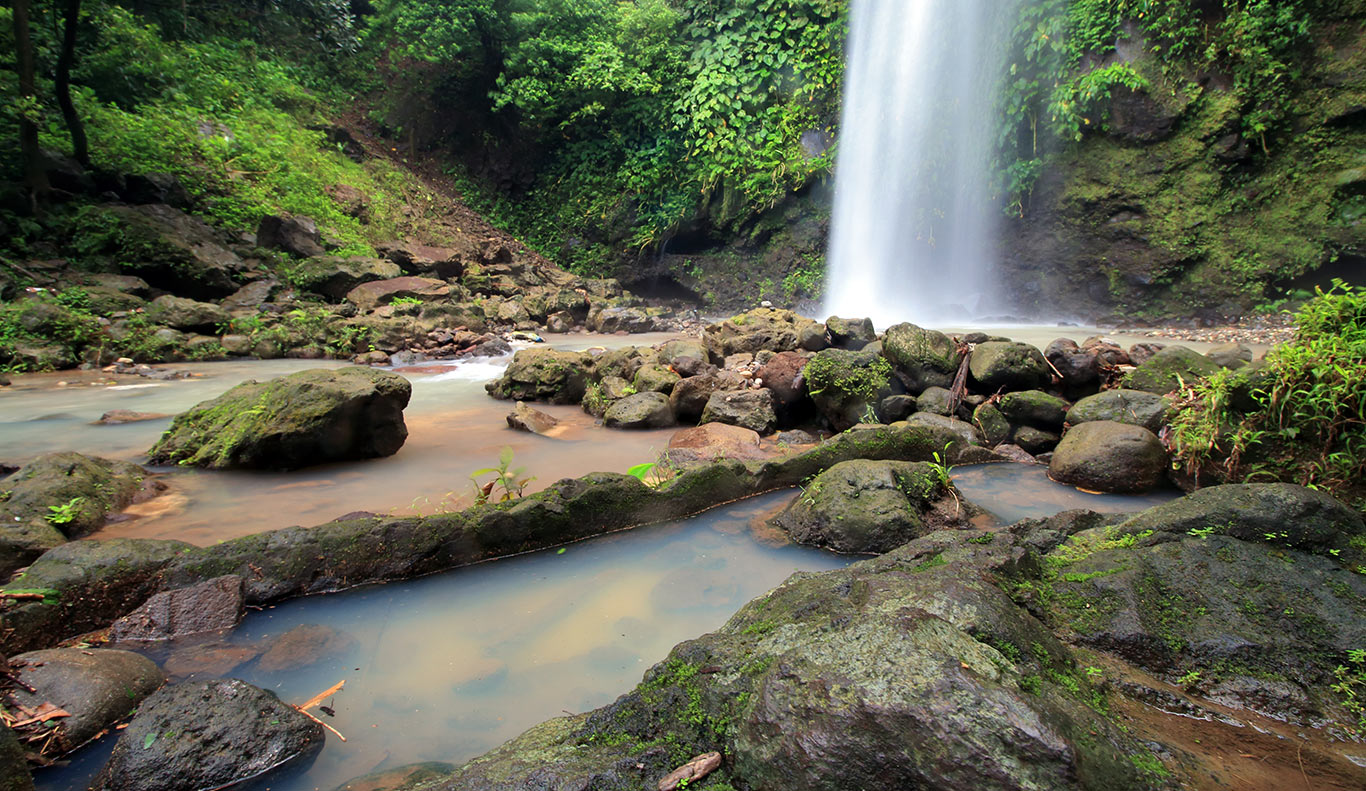 Los Baños used to be the summer getaway we would often look forward to in our younger years. Its hot springs, swimming pools and proximity to Manila helped make it a preferred destination. But as our world opened up and we started traveling to more distant lands, those Los Baños summer escapades soon faded into memory. Four years ago, however, while scouring the web for waterfalls in Laguna province, we chanced upon a then relatively unknown falls by the name of Dampalit. It’s location: Los Baños.

Intrigued that such a destination had gone under our radar all these years we drove towards Los Baños on a pleasant October day exactly four years ago. Leaving the car beside the Department of Public Works and Highways (DPWH) office, we were off for a short trek that took us past a residential neighborhood and into the edge of a forest at the Mt. Makiling Nature Reserve.

A stream – probably a tributary of the Dampalit River – led to Dampalit Falls. The latter falls into a shallow catch basin, then continues as a series of much shorter, though wider drops, into a maze of rocks of various sizes that pepper the stream. During our first visit an entrance fee was required. There were also tables and huts for rent and a couple of stores selling foodstuff. The green surroundings have made the place ideal for picnics and many locals had been taking advantage.

Four years later we would be back. This time a previously unpaved trail going up to the falls have been concreted but not all the way, forcing us to leave the car on the side of the road and trek the remaining distance. This time too there was no one to collect entrance fees – a hut that used to be at the entrance for collecting fees was gone. Gone also were the stores. The huts previously for rent looked as if they had been abandoned. We were also the only living souls in there.

Leo started to shoot photos of Dampalit but realized he had somehow left the camera mount for the tripod back home. He had to shoot long exposure shots handheld; it was fortunate the water flow was pretty strong (it probably rained the previous days) so a shorter exposure time was needed resulting in some passable shots.

It was past 11 when we got back to our parked vehicle and we were definitely ready for lunch. We were soon driving towards the line of restaurants along Lopez Avenue, the road leading to the University of the Philippines Los Baños campus. For lunch we selected Herb Republic, a restaurant serving several organic veggie dishes. Their chicken and pork servings are also organic. All of the dishes we ordered were very good (Herb Republic ranked #1 on Tripadvisor’s list of Los Baños restaurants).

While waiting for the food to be served, we took a look around at the various pieces of local artwork adorning the restaurant. We learned that most of these were for sale. 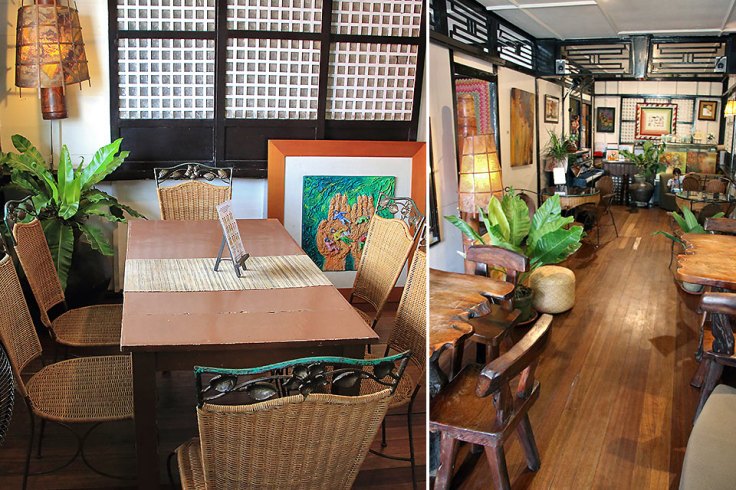 After lunch it was time for coffee and dessert. Just a few blocks down the street is Dalcielo’s which happens to be #2 among Tripadvisor’s list of Los Baños restaurants. We were intrigued by their Pinoy Cheesecake and chose that as well as Apple Pie à la Mode. The former is cheesecake with a local twist, made using goat’s milk cream cheese on a bed of green mango sauce and slices of pickled green mango. The green mango balances the richness of the cream cheese and overall the dessert was okay but it wasn’t something we’d die for. The Apple Pie à la Mode though, was excellent.

During our first visit we had dessert at Café Antonio, located on the national road going to Sta. Cruz and just beyond the intersection with Lopez Ave. It was relatively new back then but has grown in popularity since. Café Antonio serves pasta, pizza and other specialty dishes but we were here for dessert and ended up ordering their blueberry cheesecake and black truffle cake.  They serve a wide variety of impressive coffee blends from both local and international sources including coffee from Colombia, Costa Rica, El Salvador, Ethiopia, Guatemala, Kenya, Nicaragua and Rwanda.

On our second visit we chose to buy Buko Pie (young coconut custard pie) at Lety’s rather than at The Original Buko Pie Bakeshop where we usually bought them in the past. Buko pies at both establishments are excellent and there’s not much to choose between the two. However, because of the long line of parked vehicles at The Original Buko Pie, we ended up at Lety’s where we got to park easily.

When we tried using Waze or Google Maps for this purpose it led us all the way inside the UP Los Baños campus. It appeared we would have to cross a stream on foot to get to the top of the falls (!). So we simply reverted to the route we tried the first time we went there which is as follows:

At Los Baños (about 3-4 kilometers before the intersection of the national road and Lopez Ave.) look for the road going to the DPWH and DENR offices near Camp Makario Sakay (formerly Camp Eldridge) on the right. This is just after the Splash Mountain Resort on the left. Turn right on this road and drive until you reach the DPWH regional office. You can park your vehicle near the DPWH office. During our latest visit the road going up from the DPWH office was partly concreted. We drove on that road until the end of the concreted portion and just left the car there. If this is too risky for you it’s better to just park your vehicle near the DPWH office.

From there you will take an uphill though relatively easy trek on the way to the falls. It’s a good 15-20 minute walk that will take you through a residential area. Just keep asking the locals along the way for directions to Dampalit Falls.