It was a cloudy Wednesday morning when our trike made its way out of Kota Beach Resort and Santa Fe town proper via the main highway and into a narrower road towards Maricaban. After a few minutes of driving down this paved track, our trike stopped on the side of a field and our driver motioned for us to follow him. We were soon walking down a trail still somewhat slippery from the previous night’s rain. After less than 15 minutes of trekking we were staring down a pristine white sand beach framed by crystal-clear waters. And there was no other soul in sight.

Paradise Beach is a secluded beach in the southern part of Bantayan Island. It is reportedly owned by the same owners of Santa Fe Beach Club and Ogtong Cave Resort but lack of road access has prevented the building of a resort here. There are no huts on the beach, only benches on top of the small cliff rising above the beach. If you want a place in Bantayan where you can get away from it all this is definitely an excellent choice. 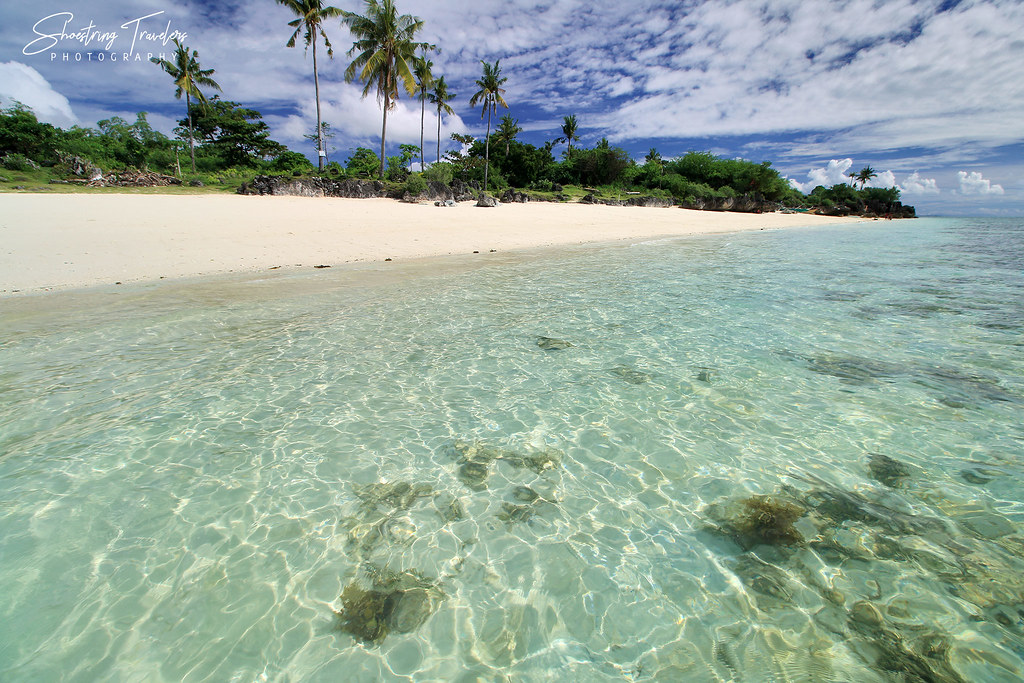 A light shower had begun when we arrived at Paradise Beach. Karst formations scattered all over the beach provided a ready-made shelter. In just a few minutes, however, the skies cleared and the morning sun was soon shining down on us. It was a welcome development for picture-taking since a bright sun enhances the colors of the water. 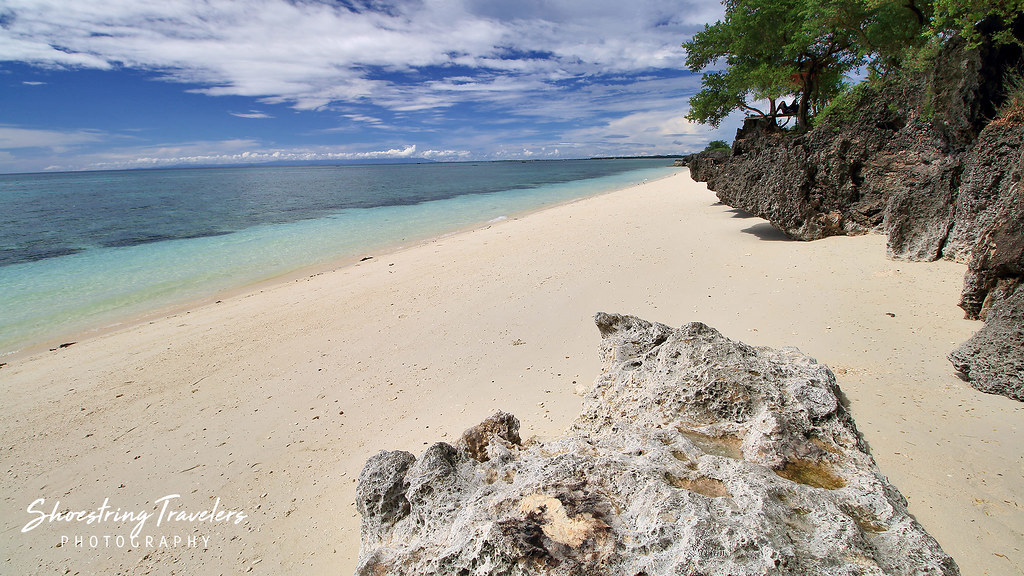 The rocky cliffs on the eastern side of Paradise Beach is sometimes used for cliff diving. There are some fishing boats tucked away on this side. We observed some traps laid out in the water here – it turned out to be traps used for catching sea urchins. A European couple materialized from nowhere – probably from nearby Maricaban Beach – and bought some sea urchins from one of the locals. 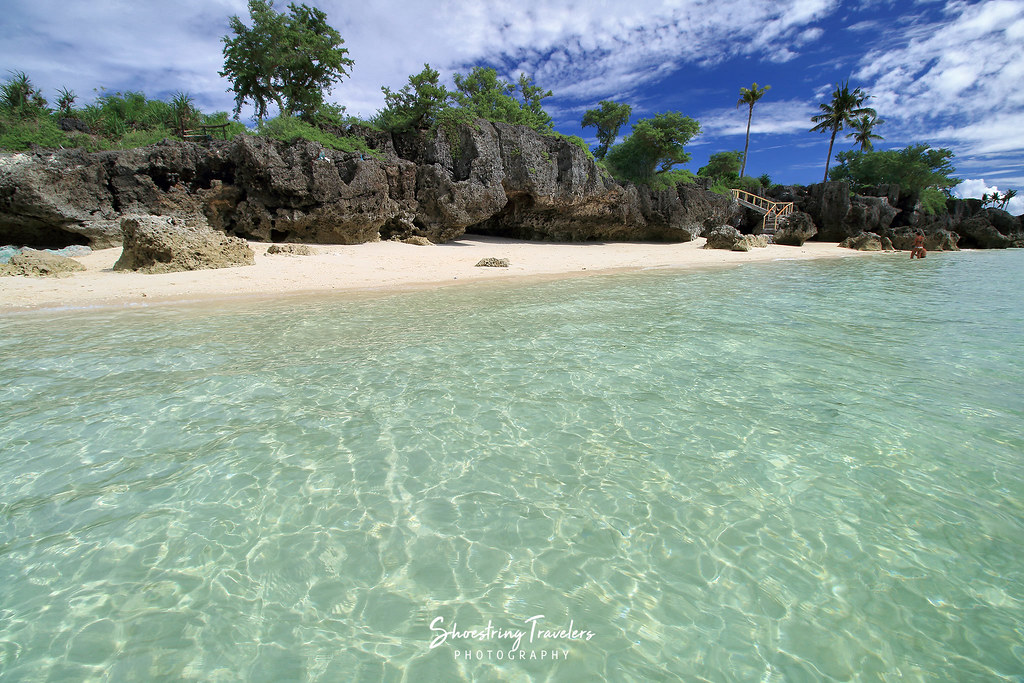 Paradise Beach is probably the most beautiful of the beaches in Bantayan because of its relatively pristine state. There are other beaches and attractions in the southern section of Bantayan. Maricaban Beach immediately to the east of Paradise is another long stretch of white sand beach that extends all the way to Obo-ob Mangrove Eco Park. The latter is a mangrove forest that can be negotiated by boat, by kayak, or on foot. The latter can be done by using a bamboo walkway that runs across the mangrove forest. Entrance fee for Obo-ob is P50.

Less than 2 kilometers to the east of Paradise Beach is Ogtong Cave Resort, a resort that houses a small cave with a natural freshwater pool. We had originally planned to visit this resort to observe the small cave but we balked upon learning that the entrance fee had just been raised to P200 which we felt was too expensive just to take pictures of the cave. (The entrance fee, however, allows the visitor to use the resort’s facilities including their swimming pools.)

We opted instead for the Santa Fe Cliff Diving Spot, situated near the ruins of a building and along the road between Paradise Beach and Ogtong Cave Resort. We don’t do cliff-diving but the panoramic scenery of the surrounding waters here were just too good to pass up.

Ogtong Cave is actually the terminus of the kilometers-long expanse of white sandy beaches that stretches to Kota Beach, to the ferry terminal and Santa Fe Beach Club on Bantayan’s eastern coast and on to Bantayan Island Nature Park and Resort in the middle of the island’s eastern coast. We’ve mentioned in our last post that this is perhaps one of the most breathtaking beach scenes in the Visayas. A notable portion of this stretch, besides Kota Beach, is Sugar Beach, located less than 1 kilometer to the west of Kota Beach.

Paradise Beach may be reached via a tricycle ride from Santa Fe town proper. The ride is about 20 minutes. The trike will then drop you off at a trail on the side of the road that leads to the beach. Another 10-15 minutes of trekking is required before you finally reach Paradise Beach. We rented a trike for P300 to take us to Paradise Beach, wait for us, then drive us back to Kota Beach Resort. Our return trip included one stopover – at the Sta. Fe Cliff Diving Spot in this case.

Trike drivers will actually offer to take you on a tour around the scenic spots in the southern part of Bantayan including Paradise Beach, the Obo-ob Mangrove Eco Park and Ogtong Cave Resort for P600. Obo-ob Mangrove Park is about 45 minutes away from Sta. Fe proper. You may get in touch with Ricky Calvadores, the trike driver who took us there. His mobile phone number is 0947-583-4132.

Go here for directions on how to get to Santa Fe