A day after arriving back from our trip to Bantayan Island earlier this month, we were greeted by sad news. A long-time friend, leader and mentor passed away after his battle with leukemia. Fel Yturralde, who hails from San Diego, California, had been our team leader for several years in the Philippines. Fel and his wife Lorrie served in the Philippines, the native country of both of their parents, for more than 20 years.

Fel and Lorrie were constant companions in our many travels across Southeast Asia from the late ‘90s to the early 2000s, when our roles in the organization expanded to cover that region. When we moved to California to continue serving with the same Christian organization, we were also in the same team with Fel. Our brief stay in America gave us opportunities to do some memorable road trips in the western part of America. And Fel was a regular accomplice in many of them.

One road trip that stood out was the one we made before returning to our home country for good almost ten years ago. We’ve posted our Highway 395 road trip previously but that trip was actually part of a circuitous route beginning in San Diego to Davis in Northern California, then east to Lake Tahoe and on to Highway 395 and back to San Diego. 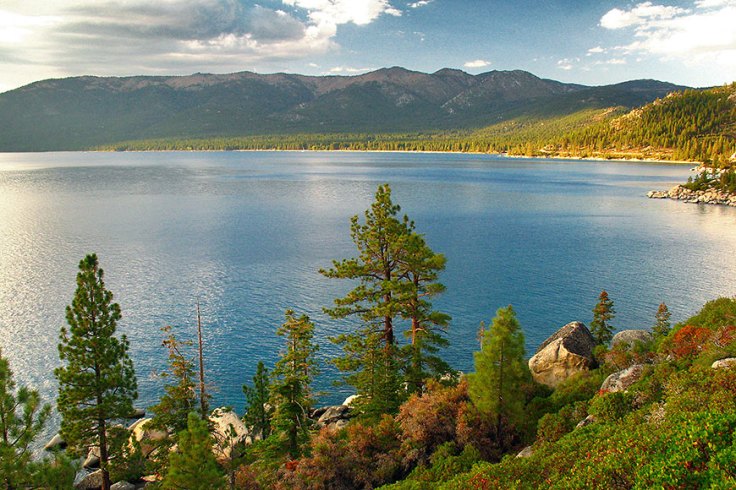 Fel knew that Leo had always wanted to see Lake Tahoe but never had the chance. Just a few days before our flight back for the Philippines, Fel was visiting his son at UC Davis and he invited us to come along. From Davis we would drive east to Lake Tahoe, bed for the night at Reno, Nevada, then continue south back to San Diego via Highway 395.

Lake Tahoe is accessible from Davis via Route 50. The latter route would take us through part of the Sierra Nevada range and right through the El Dorado National Forest. This part of the journey was right away scenic with views such as the one above.

An alpine lake with crystal-clear waters framed by evergreen forests and the snow-capped mountains of the Sierra Nevada, Lake Tahoe sits at the junction of the states of Nevada and California. Ski resorts are a major tourist attraction during winter while various forms of summer recreation also draw in crowds during the warmer months. However, we were looking for a quieter interaction with nature and Lake Tahoe did not disappoint.

A 72-mile road loop around lake makes it possible to drive around Lake Tahoe’s perimeter. Route 50 enters the lake from the south side. The South Shore is a somewhat “overdeveloped” stretch since most of the entertainment in Lake Tahoe is situated in this area. (The casinos on the Nevada side of the lake are located here.) The first beaches we encountered while driving up towards the western side of the lake – Reagan Beach and El Dorado Beach – are not as beautiful as other beaches elsewhere although both have nice lakeside parks.

The view changes dramatically though as we drove along the elevated portion of Highway 89 northwest towards Emerald Bay. With its deep green water, surrounding evergreen forest and the only island in all of Lake Tahoe – Fannette Island – Emerald Bay is undoubtedly the most photographed location in the lake.

To get a closer glimpse of Fannette Island we headed towards Emerald Bay Lookout. From there we could also spot Vikingsholm Castle at the head of the bay. Built in 1929, Vikingsholm is an interesting replica of a medieval Scandinavian castle and a throwback to the early 20th century when vacationers from the Bay Area built summer homes and resorts along the lake’s shores. Fel reminisced about his childhood times when he and his relatives used to spend their summers at their Tahoe Lake vacation home.

Continuing up Highway 89 along the western shores of the lake and further up north brought us to Sunnyside and Tahoe City. A favorite among art lovers, Tahoe City is where one can find several art galleries selling paintings of Lake Tahoe’s vistas.

Our drive along the northern shore just after King’s Beach brought us to Crystal Bay and the Nevada side of the lake. Incline Village, located along the shores of Crystal Bay, is probably the most beautiful community in the lake. Driving past Incline Village brought us to the eastern shores of the lake – the most undeveloped and scenic part of Lake Tahoe with the exception of Emerald Bay. The lake’s turquoise waters and boulder-strewn beaches on the East Shore are a sight to behold.

A few miles further south but still along the East Shore is beautiful Sand Harbor, famous for its white sand. We were somewhat surprised by the sand color, thinking that white sand is the exclusive domain of tropical beaches. While most of the beaches here on the East Shore are of rocks or coarse-grained sand, Sand Harbor is famous for its relatively fine-grained sand deposited by Lake Tahoe’s prevailing breezes.

It was getting dark by the time we left Sand Harbor. When we got to Secret Harbor we headed up the beach in time to watch the spectacular sunset. It was evening when we took the exit through Highway 50 and on to Highway 395 and Reno, Nevada, where we would spend the night. That highway belongs to another story but as we made our way to Reno, we could only smile at our good fortune to visit an alpine lake we have been dreaming about for years.

Our journeys with Fel involved so much more than mere road trips, however. He was a travel companion for a major stretch on the highway of our lives. He was our team leader in Manila, a mentor and a loyal friend. Humble and unassuming yet a visionary servant-leader, Fel was someone with whom you can laugh heartily and cry unashamedly.  A good deal of the life lessons that guide us today were learned on that part of the journey with him.

It pained us to leave him, Lorrie and many other friends when we left America back for the Philippines. It was even more painful to see him leave this world for good. We had hoped before that somehow our paths would merge again. It won’t happen on this earth anymore but we’ll see you sometime, Fel. In a much better world.