It has menacing looks and a huge frame to match, but also exhibits a graceful and majestic form in flight. A large and powerful bird of prey, it used to be called the monkey-eating eagle because macaques formed part of its diet. Some have even fed on small deer weighing as much as 14 kilos – a testament to their strength and size. But with only an estimated 400 or so pairs left in the wild, the Philippine Eagle is critically endangered.

In Davao City, a facility was set-up in a forested area at the foothills of Mt. Apo in Malagos, Baguio District to help in the conservation of this magnificent bird. The Philippine Eagle Center has been operating as a breeding facility for the Philippine Eagle and other birds of prey and represents a glimmer of hope for the species’ survival.

Fighter, a rescued juvenile Philippine Eagle at the center

The center holds several huge cages that contain trees and plants to simulate a natural habitat for the eagles, many of which have been bred here. Two eagles, named Fighter and Mindanao, are outside the cages to enable visitors to see them up close. Fighter is a juvenile eagle that was rescued and rehabilitated after being senselessly shot in a nearby province. Sadly he will not be able to fly anymore because of irreparable damage to his left wing. Mindanao is an adult eagle that was hatched and bred at the center.

Fighter, left, and Mindanao, right. Younger eagles have shaggy, semi-raised crests that flatten as they get older

The Philippine Eagle is the second largest of all eagles in the world in terms of weight and body mass but largest in terms of body length and wing area. The longest measured eagle has a record length of 3 feet and 8 inches. Wingspan is anywhere from 6 to more than 7 feet. Endemic to the Philippines, these raptors can be found from Luzon to Mindanao but are critically endangered due to the loss of their forest habitat and poaching.

A white-bellied sea eagle at the Philippine Eagle Center

Other birds of prey at the center include the Philippine serpent eagle, the white-bellied sea eagle and the Philippine hawk-eagle. In contrast to the endemic Philippine Eagle, the white bellied sea eagle can be found in the coasts and major waterways of India and Sri Lanka through Southeast Asia to Australia. Its conservation status has been pegged as of Least Concern globally but its numbers have been declining in parts of Southeast Asia and southeastern Australia.

The Philippine hawk eagle with its long crest

The Philippine hawk eagle is endemic to Luzon and is likewise threatened by habitat loss. Its unique identifying feature is a long crest that consists of 4-5 black feathers that can measure up to 8 centimeters. Besides these raptors, there are other colorful birds at the Philippine Eagle Center including the Silvery Kingfisher, the Philippine Hanging Parakeet, and the endemic Philippine Coucal. Seeing these birds – many of them endemic to the country – from up close gave us a sense of the richness of the country’s biodiversity but a feeling of dismay as well knowing many of these unique animals are in danger of extinction. 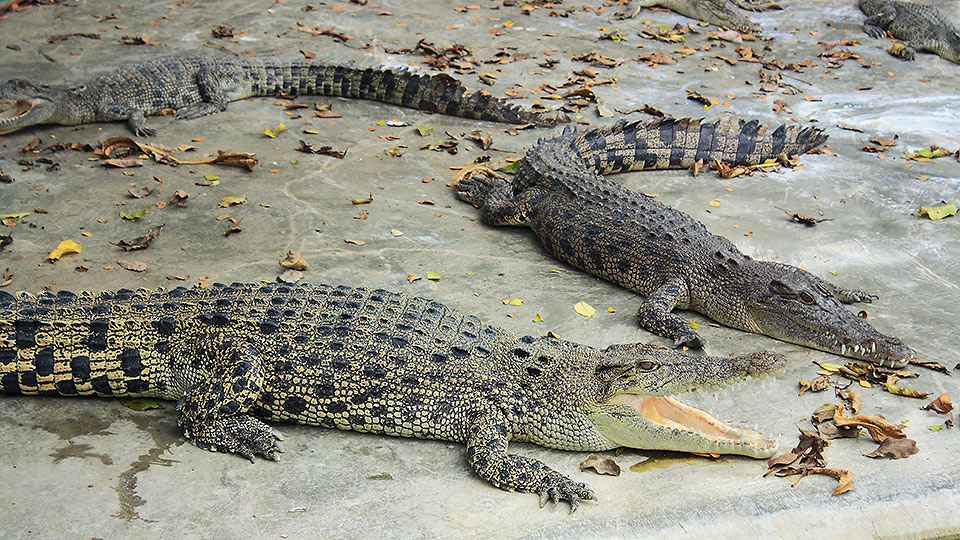 Residents of the Davao Crocodile Park

Providing another opportunity for animal encounters in Davao City is the Davao Crocodile Park. Located at the Riverfront Corporate City in Ma-a, the Crocodile Park houses over 700 hundred cultured crocodiles.

The crocs here are raised for their skin, meat and pretty much everything the animal has to offer as it seemed no part of the animal gets thrown away. This becomes apparent as we went through displays of such products like wallets, bags, belts and other leather products (one whole crocodile skin alone costs P80,000), crocodile oil, soap and even crocodile meat and ice cream. 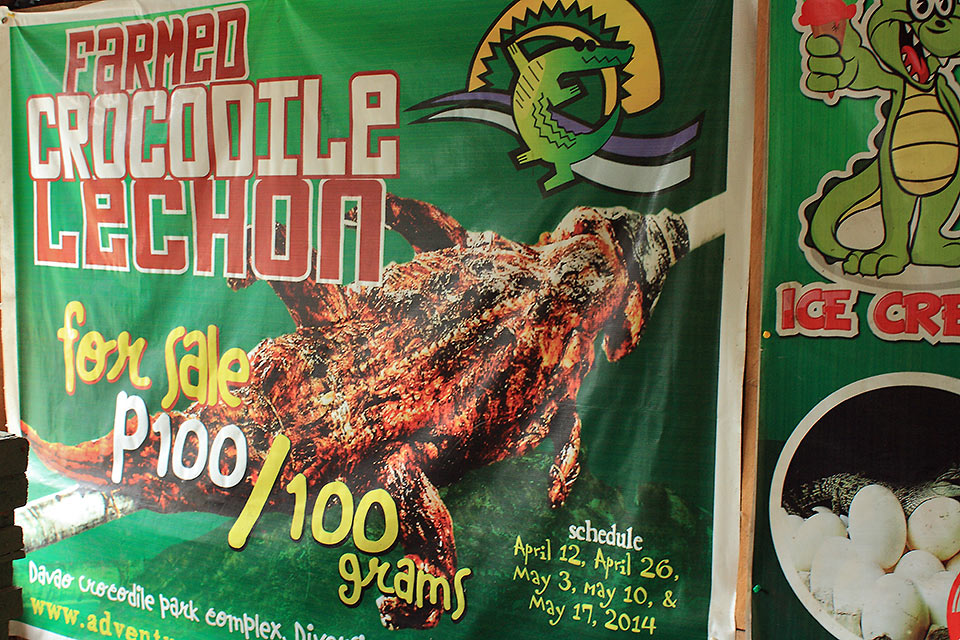 Crocodile Lechon or roasted whole crocodile. A crocodile ice cream poster is on the right. We thought it would contain croc meat but it turned out that crocodile eggs were used to make the ice cream.

The Palawan Bearcat is a subspecies of the binturong that is endemic to Palawan. The gentle binturong, which can be found throughout Southeast Asia, has increasingly become a favored exotic pet. (Check out this video.) Unfortunately this is also one of the reasons (though not the main one) for its declining population. It is presently classified as a vulnerable specie.

Another creature on the vulnerable list: the Philippine deer.

The Philippine Eagle Center is located in Malagos, Baguio District, Davao City – just 45 minutes to an hour away from the heart of Davao City. The entrance fee for adults is P150 (P100 for children). A tour guide is usually provided; the guide will also get you to pose with a white-bellied sea eagle and a hawk-eagle for photographs.

The Davao Crocodile Park is located at the Riverfront Corporate City, Diversion Highway, Ma-a, Davao City. The entrance fee is P250 for adults and P150 for kids 2-12 years old. This increases to P300 and P175 respectively on Fridays and weekends beginning at 3PM.

4 thoughts on “Eagles and Crocodiles: Animal Encounters in Davao”