Last April 10, PAGASA (the Philippine government weather bureau) announced the termination of the northeast monsoon. This is usually taken as the start of summer or the warm and dry season in the country. A day later we were off and driving, heading for the beaches. We stopped briefly at the Subic Bay Freeport Zone to give Manny, a visiting Balikbayan friend, a look at the former U.S. naval base converted into a duty-free zone. Afterwards it was on to the northernmost part of Zambales province and the town of Santa Cruz.

The almost six-hour long drive (not counting detours and stopovers along the way) was through scenic coastal towns. Summer was now apparent – by mid-morning the skies were almost cloudless and the hot sun was beginning to bear down on us. It was just the perfect setting for our visit to Hermana Menor Island just off Santa Cruz town.

We’ve visited several popular white-sand islands and beaches in Zambales in the past – Potipot Island, Magalawa Island, Capones and Camara Islands, and the beautiful coves of Anawangin and Nagsasa. Not far from Potipot – the northernmost island of the group – are the islands of Hermana Menor and Hermana Mayor. We’ve heard before that both islands are privately owned and off-limits to visitors.

A few years ago, however, the new owners of Hermana Menor (the governor of Palawan province and a family from Zambales) allowed access to the island. When we learned about this a few months back we made sure we would visit this island in the summer. There is no resort at Hermana Menor but we could stay at a resort on the mainland in Santa Cruz town and rent a boat to take us to the island.

We ended up at Seasun Beach Resort, a resort owned by a Danish guy and his Filipina wife. Along with Manny, we arrived here mid-afternoon and decided to just roam around the resort grounds and the beach at the back of the resort for the rest of the day. Even though it is already summer, the waves were reportedly still choppy after noon. To play it safe boats make the trip to Hermana Menor in the morning.

The following morning, therefore we rode a small boat to the island. The ride took less than 30 minutes. In the middle of the trip the seas became moderately strong but our boat handled it well. We remember a boatman at Marinduque telling us that smaller boats make for a more stable ride in moderately strong waves compared to larger ones. We doubted it at that time but it turns out that he was correct.

Hermana Menor, also called Makatira Island by the locals, greeted us with its crystalline turquoise and blue-green waters and a long stretch of powdery creamy white sand. Our boat docked at a crescent-shaped beach in the northeastern section of the island that was dotted with coconut palms, evergreen trees and talisay (Indian almond) trees. The talisay trees were about to shed their leaves which had turned into a bright red-orange, giving the tropical setting an unusual but beautiful autumn feel.

This area contains the widest stretch of creamy white sand in the island and also houses several native-style huts and cottages in addition to the owners’ rest house. A curving sandbar projected from the northeastern tip of the island out to sea before turning slightly inwards, creating a lagoon in front of the beach where we had landed.

The lagoon so-formed has a seabed that drops abruptly; you can deduce this from the sharp transition of the transparent waters inside the lagoon to deep blue-green. The blue-green waters contain plenty of marine life, an ideal location for snorkeling. We later learned that this particular area is a marine sanctuary.

From the main beach area there is a trail inland that leads to the northern beach of Hermana Menor. We had wanted to explore more as the trail led to the northwest but we were warned not to proceed further since thorny bushes covered part of this trail. The northern beach actually connects to the northeastern beach and sandbar. Here the waters are shallower than the lagoon; the crystal-clear turquoise waters were very inviting.

Practically the whole perimeter of Hermana Menor is lined with creamy white sand and if we had more time it would have been fun to circumnavigate the whole island – although the thorns on the trail up north is an impediment. Hermana Menor’s bigger sister – Hermana Mayor – is easily visible to the northeast. The two sisters (hermana is Spanish for sister, menor is young and mayor means older) are almost similar except for their sizes. Hermana Mayor also contains a stunning sandbar. 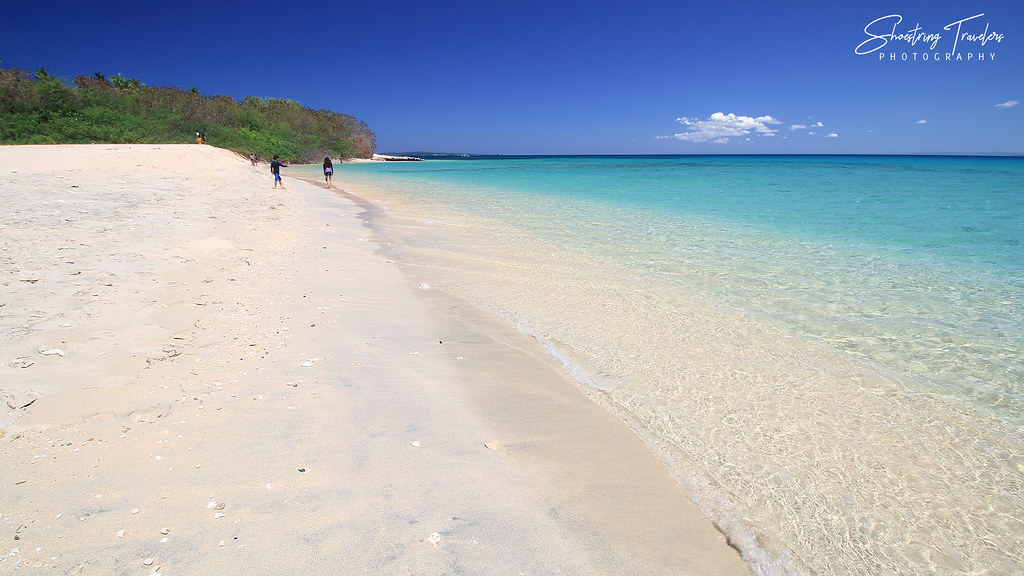 If commuting from Metro Manila take a bus bound for Santa Cruz, Zambales. Victory Liner has buses that ply this route. You can stay at a resort in town and use that as a base to explore Hermana Menor; the resorts usually have boat contacts that make the trip and can even take you down south to Potipot Island. The route is also pretty much straightforward for private vehicles.

If you don’t plan to stay overnight, you can head straight for the port in Santa Cruz town. Take a trike from the main highway to the port where you can rent a boat to take you to the island. Boats good for 5-6 people may be rented for P1,300 to P1,500. If staying at a resort, the resort staff can usually get a boat for you. (We got ours for P1,400.)

There’s an entrance fee of P100 per person. There is no resort at Hermana Menor so don’t expect comfortable accommodations here. They do have basic huts at P500 for 8-10 people, P1000 for 15-20 people and tables for P350. They also have basic comfort rooms. There is a small store that sells drinks and snacks but no restaurant; you have to bring your own food if you intend to take lunch on the island (they also have a grilling station). It’s also best to bring drinking water. The facilities here are quite basic but if you’re a lover of nature you’ll easily overlook that since the island is pristine.

A Season for Mangoes

Zambales has the world’s sweetest mangoes as confirmed Guinness Book of World Records in 1995. Mangos grown in Masinloc, a town just south of Santa Cruz, were found with a total soluble sugar of 23 percent. The summer months are usually the time of the mango harvest (the Dinamulag Festival also known as the Zambales Mango Festival is held in April). So on your way back, do remember to drop by the Mango Highway at San Felipe town, a stretch of the national highway that features roadside stalls selling quantities of the fruit.

10 thoughts on “Start of Summer at Hermana Menor”