After years and years of seeing it in postcards, travel guide books and school textbooks, we were finally gazing down at the rows of terraces looming out of the morning fog. Still somewhat tired from the whole day trek to and around the Batad Rice Terraces the previous day and the hike back to the saddle where our jeepney ride awaited us earlier that morning, we finally made it to one of the view points at Banaue’s poblacion.

The rice terraces at Banaue’s poblacion

The rice terraces near the town center of Banaue in Ifugao province are the most famous of all the terraces in the Cordillera region. Spread out all over the town, many of them are located right along the road to Bontoc which provides a number of vantage points for viewing the terraced paddies. The most popular is the Viewpoint located some three kilometers north of Banaue town center from which photos of the terraces are the ones we often see in social media, postcards, books and peso bills.

It took a lot of backbreaking work by the native Ifugaos as far back as 2,000 years ago to achieve this piece of engineering feat that we were now witnessing from the road. It has been said that if the terraces in Ifugao were laid from end to end they would circle almost half the world’s diameter. The fact that this network of 10,300 square kilometers of rice terraces were all done by hand and are still in use today just blows us away.

Hand-carved by the native Ifugaos

Upon closer observation, we observed a few terraces that were not being cultivated anymore and were getting overgrown by shrubs. Probably because they were less productive, these terraces have fallen into disrepair and disuse. Many of the younger local people are also moving into bigger cities for better opportunities leaving no one to tend paddies that generations of Ifugaos had cultivated. And who can blame them? For now however, only a fraction of the terraces are showing signs of deterioration even as efforts are underway to help preserve the function and beauty of these stairways.

As impressive as they are, the terraces in Banaue’s poblacion are not on the list of UNESCO’s World Heritage Sites. (The reasons aren’t clear but we remember others saying that it was because of the many modern structures situated along several points of these terraces.) However, there are 5 clusters of terraces within Banaue and nearby towns in Ifugao that were declared UNESCO World Heritage Sites in 1995. These are: 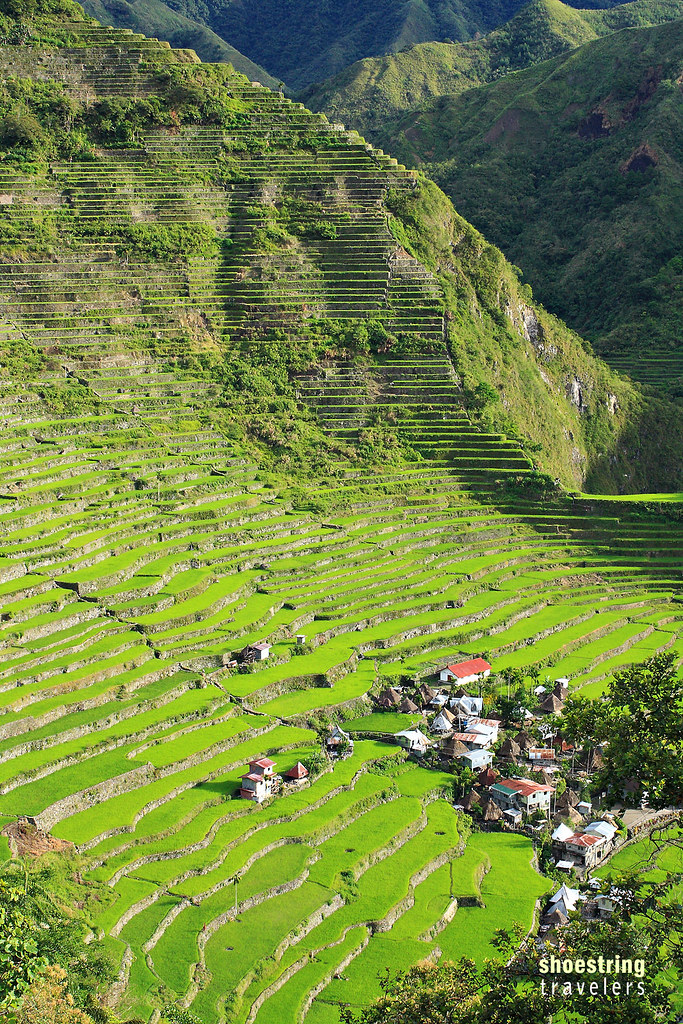 There are other interesting sites in Banaue including the sitio of Matang-lag with its bronze smiths, the Guihod Natural Pool and Poitan Village with its real-life demonstrations of carving and weaving. We opted to go to Hiwang for its native huts and yet another viewpoint where one can have a panoramic view of the terraces in Banaue and adjacent places.

We were surprised by human skulls displayed outside the native huts until we were told that they belonged to World War 2 Japanese soldiers killed in the fighting here in 1945. Locals say several have been returned to Japanese visitors searching for missing Japanese troops during the war. The town center also has shops selling woodcarvings and wooden furniture.

Wooden implements and figures inside a hut at Hiwang

The terraces turn into lush green from April to May and from October to November, then into golden yellow just before harvest time in June and December. We went in May just in time to see the rice stalks beginning to turn to a golden yellow, although several terraces in Banaue had already seen harvest time by then.