We’ve done a road trip through the main highway going north (MacArthur Highway) to the Ilocos provinces of La Union, Ilocos Sur and Ilocos Norte at least four times now but there are a few towns where this road doesn’t pass through. One of them is Luna in La Union province. On our last visit to La Union, we had a chance to see the town and what it had to offer for the first time. 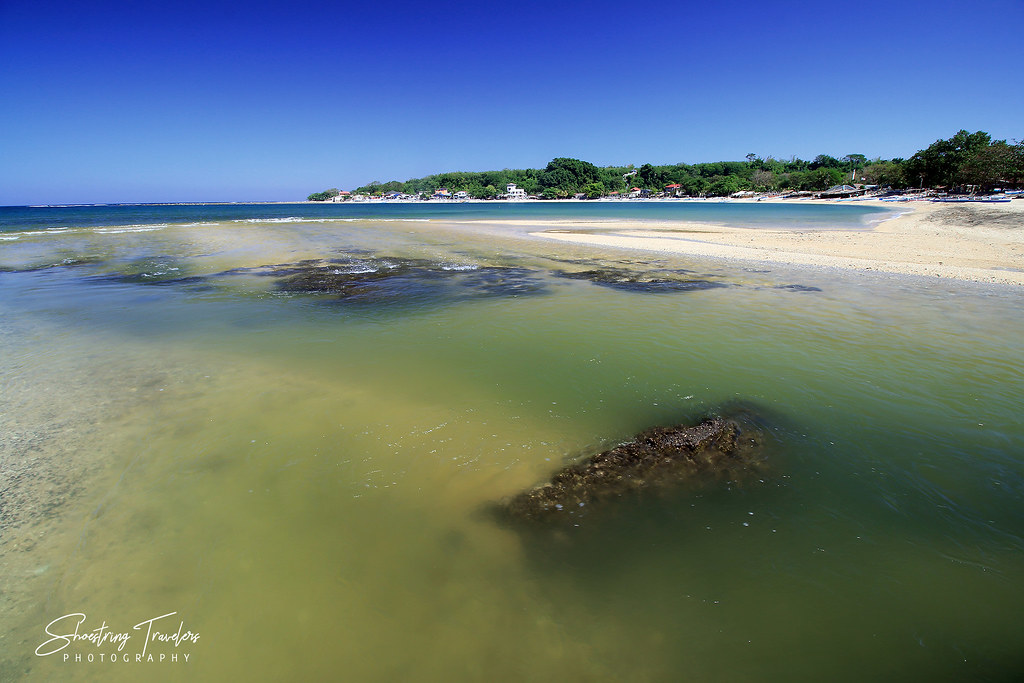 After our visit to Immuki Island in Balaoan town, we continued driving north into the neighboring town of Luna. Immediately after the boundary between Luna and Balaoan we encountered Darigayos Beach. Unlike most beaches in Luna, as we would discover later, Darigayos Beach is a white sand beach. The beach appeared deserted – although there are a number of resorts and some huts and beach cottages here. After taking a few photos we drove off for Luna proper.

The town of Luna is named after the Luna brothers, painter sculptor and political activist Juan Luna and revolutionary general Antonio Luna. Their mother is a native of the town, formerly named Namacpacan.

Pebble stones at a beach in Luna

At the houses along the road to the town center we could see bags of pebble stones and knew from blogs and articles about the town that these were collected from Luna’s beaches. The pebbles that come in various colors are then sold to traders from Metro Manila and other parts of Luzon. This industry has given Luna the reputation as northern Luzon’s pebble capital.

Our next destination for this short visit was the famed Bahay na Bato in Barangay Nalvo Norte. Originally a rest house for Dr. Edison and Dr. Purita Chan-Noble, the house became an icon of sorts, with its collection of stone arts and figurines made from pebble stones. The house itself is made up of stones and pebbles and was declared a tourist site by the municipal government of Luna.

Besides the stone sculptures, there are several wood carvings here as well

The rock and stone artworks and the Bahay na Bato house is the creation of Korean artist Vong Kim. To house the stone art works and wood carvings, along with several paintings, a gallery was constructed near the house. The gallery also includes souvenirs and handcrafts for sale. We actually neglected to visit the Bahay na Bato house itself, thinking the gallery and house are the same.

The beach at the back of the house and gallery is probably the best remaining example of a pebble beach in Luna. Here the pebbles cover the beach in thick carpets unlike other beaches in Luna where much of the pebbles have already been stripped off.

Continuing north from Bahay na Bato we ended up at the town center and at The Shrine of Our Lady of Namacpacan Church in Barangay Victoria (this church has been declared a National Cultural Treasure). A road at the side of this church leads to the Pebble Beach, some 650 meters away. This beach used to be the site where locals direct visitors wanting to see a pebble beach in Luna. Unfortunately the pebbles here have been almost cleaned out by pickers leaving only patches of stones. However, we were after something else.

The Baluarte; the older part of the restored structure (adobe and coral rocks) is the darker colored half on the right; the newer portions are made of light red bricks

Pebble Beach happens to be the site of the Baluarte, a 400 year-old stone watchtower built during Spanish times to warn locals of Muslim and pirate attacks. This tower also served as a communications post for an improvised airfield in World War 2. Due to excessive stone and pebble quarrying of the beach, however, the ground in the area receded which may have caused the tower to crack in two. Huge waves generated by Typhoon Lando in 2015 further compounded the damage, practically demolishing one of the halves of the cracked structure.

The older half of Baluarte

The Baluarte was reconstructed using light-red bricks to replace the demolished older portions of the structure which was originally made of adobe and coral rocks. The restored structure looks too good from outside and it’s immediately evident that part of it is new.

Inside the restored Baluarte

We finished this visit just before noon after which we headed south for lunch at Bacnotan’s River Farm Seafood Restaurant and on to Baguio City where we would end our short foray to Northern Luzon. There’s another attraction in Luna that we had been thinking about visiting – Occalong Falls – but we only had the morning to spare.

In retrospect, Luna, like the other towns in the Ilocos Region, offers a combination of historical sites and natural attractions – a nice alternative to the usual plethora of beaches and waterfalls that we usually visit here in the Philippines (not that we’re complaining). We may need to begin thinking about another Ilocos road trip soon.

If taking public transportation the first step is to take a bus to San Fernando, La Union. From San Fernando take a jeepney bound for Luna. Travel time is about 45 minutes.

If coming from Metro Manila or any city down south you can also take any of the various buses bound for Vigan or Laoag. Asked to be dropped off at Balaoan town. Tricycles going to Luna are available at Balaoan. Both the Bahay na Bato and the Baluarte may be reached by trike from Luna’s town center.

2 thoughts on “Luna: Pebble Capital of the North”