More than most provinces in the Philippines, Bohol probably has the most diverse travel destinations. But like many of the archipelago’s 7,000-plus islands, its beaches and islands are the more prominent ones. These are scattered throughout the province but the more popular ones are concentrated in and near Panglao Island at Bohol’s southwestern tip.

Panglao Island is separate from the main island of Bohol but you do not need to take a ferry going there. There are two bridges/causeways from Tagbilaran that cross over to Panglao. The recent opening of an international airport right at Panglao has made the island’s beaches even more accessible than ever. 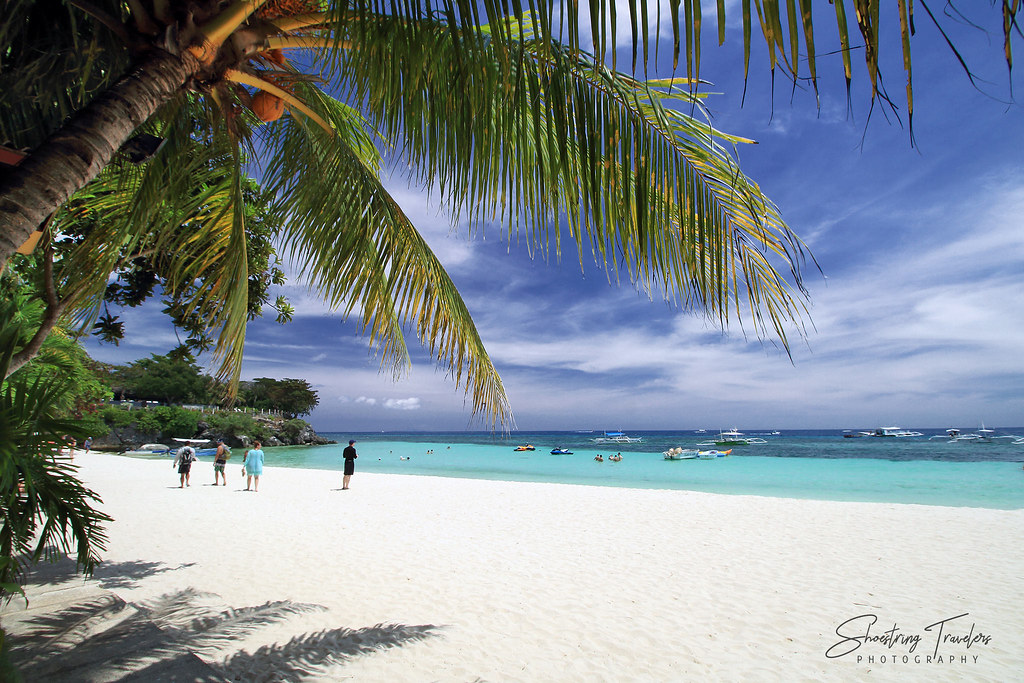 Alona Beach is the most popular beach in Bohol and probably has the densest concentration of hotels, resorts and restaurants in the province. We normally shy away from places with that kind of reputation but curiosity got the better of us this time and we ended up going there for lunch almost immediately upon our arrival in Bohol. It has a wide variety of dining options after all – something that our whole foods, plant-based diet needed.

With more than a kilometer of white sand, clear turquoise waters and rock formations straddling both ends, Alona Beach is picturesque. But as we expected the beach has become extensively commercialized with a wide range of accommodations and dining establishments. Fortunately the night life here is still relatively quiet when compared to Boracay’s at its height some time ago.

Alona Beach is said to have been named after Alona Alegre (real name: Maria Lourdes Salvador), a 1970’s movie actress who was in the cast of a film shot on this beach and who became endeared to the locals here. Incidentally, Ms. Alegre passed away just a few months ago.

Other Beaches in Panglao

We had wanted to visit Dumaluan Beach which wasn’t that far away from Alona Beach but it wasn’t to be. This beach is less commercialized than Alona even if it contains two high end resorts. It’s also a white sand beach like Alona but longer; together with adjoining Libaong Beach it stretches for a good 3 kilometers making it possible to select a private spot. Some people say it is more beautiful than Alona Beach.

We stayed at a resort in Danao Beach which lies west of Alona Beach and hidden from the crowd. Although we still found a growing number of resorts around the area it was a good place for a retreat after a whole day of touring Bohol’s countryside, other beaches and smaller islands. The beach scene with boats left high and dry at low tide forms a perfect foreground for sunsets. 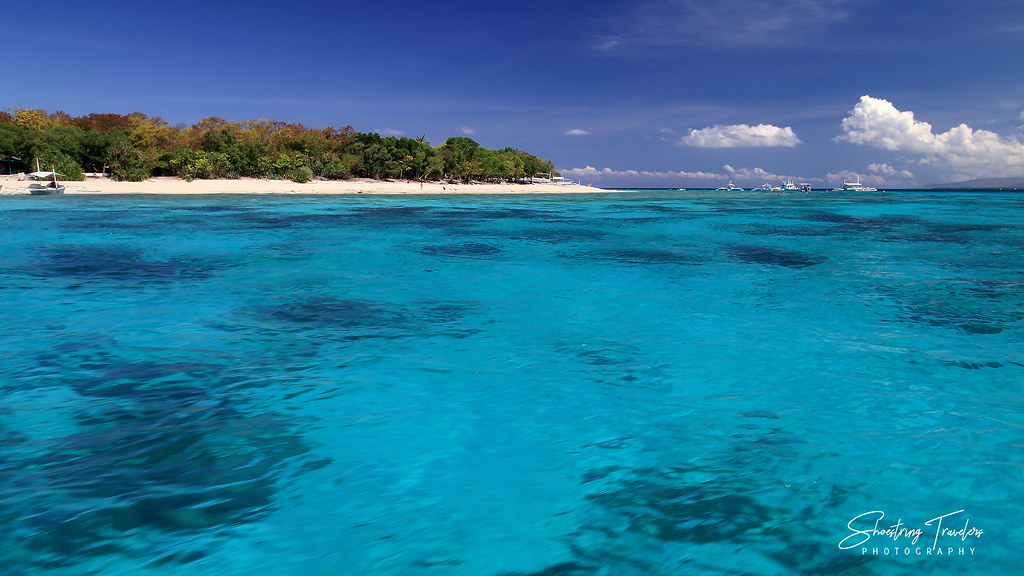 We’ve always known Balicasag as a favored diving destination. Just less than 40 minutes away by boat from our place of stay at Danao Beach, this island is normally included in the island-hopping package tour offered at Panglao. The tour we took started out rather early – 6 AM – to be able to catch the dolphins. But after circling the area between Balicasag and Panglao Islands several times we were just about ready to give up when a group of them showed up. We must have seen 3 different pods but all were shy and would disappear back into the waves after briefly showing themselves (Leo couldn’t even get off a decent shot). It wasn’t like our experience at Bais, Negros Oriental, less than 70 km. to the west, where dolphins circled our boat for at least 30 minutes, some even swimming alongside. Still, seeing these animals in the wild is quite an experience.

Dolphin-watching over we headed off to nearby Balicasag Island. The whole perimeter around this small island is covered in white sand – actually crushed corals for the most part. Declared as a marine sanctuary it has become one of the top snorkeling and dive spots in the country. We had high expectations about snorkeling here and we weren’t disappointed.

At Balicasag’s Beach we transferred from our motorized outrigger to a small row boat just big enough for the 4 of us. The snorkeling site wasn’t too far from shore and the water is so crystal-clear that some of us didn’t even bother to snorkel – you could easily see the fishes and corals underneath. Our boat anchored at a spot very close to a sudden drop-off which usually holds a lot of marine life (there are also sea turtles in the southeastern part of the island). Sure enough we spotted a huge number of corals and colorful reef fishes underwater including small schools of the largest reef fishes we’ve ever seen.

Balicasag has plenty of food stalls under the shade of trees so we took our time after snorkeling to just chill out, catch-up on breakfast and sip coffee. The next island on our list – Pungtud Island was just a short 15 minutes away.

Unlike Balicasag, Virgin Island (as Pungtud is more popularly known) has very few activities to offer. The main draw here is its long sandbar and the surrounding shallow and very clear waters. And what a draw it had become. Arriving at the island late in the morning, a large number of boats have already docked and disgorged passengers. Smaller boats floated in the aquamarine waters, their intrepid owners selling drinks, coconuts and snacks including sea urchins.

The path to the central part of the island – marked by trees – has been fenced off by the owner of the property so visitors are left with the sandbar to explore. But the area is so large that there’s plenty of room even with a large number of boats and visitors. We actually enjoyed our time here, just soaking in the shallow waters and enjoying the sight of a vast sea of white sand and crystalline waters.

Island-Hopping and Beach Bumming in Panglao

Many visitors to Bohol choose to stay at or near the beaches at Panglao Island making it relatively easy for them to tour the other beaches there. Our resort near Danao Beach even has a free shuttle van ride to Alona Beach. They do charge for beach destinations farther than that. Trikes are also available for these trips and some establishments offer motorbikes for rent.

Resorts as well as local boat owners arrange island-hopping and dolphin-watching tours to Balicasag and Virgin Islands for P1,500 to P1,900 for a group of 5. As we mentioned earlier the tour usually starts at 6 AM to catch the spinner dolphins, then head off to Balicasag and finally to Virgin Island. The island-hopping tour usually finishes before lunch.

Dolphins are best observed from March to June but it may be possible to see resident dolphins the whole year round. At the more distant Pamilacan Island, it is even possible to do whale-watching during the same period. However, tour boats from Panglao apparently do not go there. Pamilacan is under the jurisdiction of Baclayon town in mainland Bohol and it seems that only boats from Baclayon pier are able to go there.