Soaking in the crowded but buoyant street scene of Hanoi’s Old Quarter was quite an experience but this Friday morning promised a radically different encounter. Cruising on the main highway east of Hanoi, we passed vast expanses of green rice fields on the way to Quang Ninh Province and the resort city of Ha Long. Soon we would be cruising among towering limestone islands sprinkled generously across the emerald waters of Ha Long Bay.

Ha Long City is the gateway to Ha Long Bay but thankfully we avoided its high-rise structures and headed straight for the ferry terminal where our tour boat was waiting for our group of Koreans, Japanese, Germans and Filipinos. Within an hour or so we were being served lunch as our boat steadily made its way out of the terminal and into open sea.

A UNESCO World Heritage Site, Ha Long Bay is home to over 1,600 karst islands of varying shapes and sizes, towering limestone formations with many of them large enough to include thick jungle growth.

April is considered part of winter in north Vietnam even though temperatures hover around 26-30 degrees Centigrade for the most part. It’s probably the reason why the skies were grey over Ha Long Bay for much of our trip. May is when summer hits and when blues skies and bright sunshine make the karst islands and emerald waters of Ha Long look their best. Despite this we still found the scenery stunning. 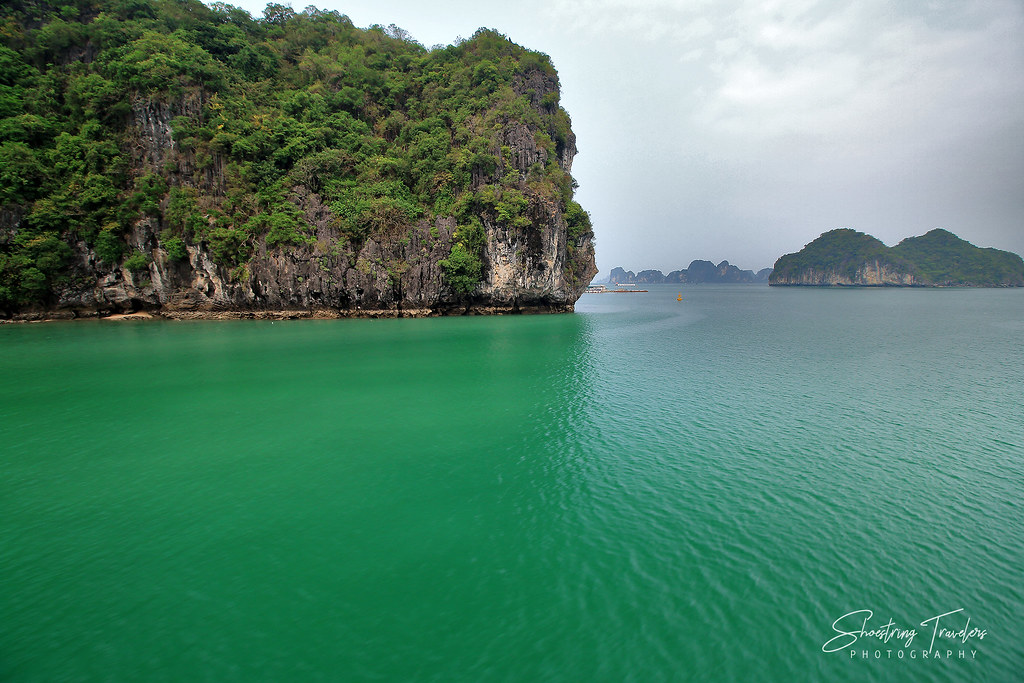 Like most tour boats in Ha Long, our sea bus had an open top deck for viewing. There are so many karst islands here that one day wouldn’t be enough to see all or even a majority of them. There are 3-day and even 5-day live aboard cruises being offered but we kept ourselves to a day tour.

Our first stop after lunch was towards a (partially) hidden lagoon. This was an enclosed body of water surrounded on all sides by towering karst cliffs with an opening in one of the huge limestone formations that allowed row boats to pass through. After our boat docked at a pier near the lagoon we transferred to a smaller boat good enough for 15 people with which to explore the lagoon’s interior.

Some of the islands contain caves. There are 59 caves in Halong Bay as of last count, with probably more waiting to be discovered. The most famous of them, and our next destination, is Sung Sot Cave, a huge cavern located at Bo Hon Island.

Its fame is a slight cause of concern for us since we knew we would literally be rubbing shoulders with tourists waiting to explore the famous cave. Our fears were justified when we found our boat in a queue on the way to a dock for boats at Bo Hon Island. After that it was a long, slow walk upstairs, one agonizing step at a time up the 100 or so flights to the opening of Sung Sot cave (this cave is located at an elevation much higher than sea level). Once up on the heights though and just before entering the cave, we were treated to a spectacular panoramic view of this part of Halong Bay. It reminded us about a viewpoint at Matinloc Island in El Nido, Palawan back home, although this one had a grander view.

Sung Sot Cave is huge, 10,000 square meters large to be more specific. The passageway is about half a kilometer long and although there are 1 or 2 spots where one has to squeeze through to be able to pass, much of this cave is several meters high – 30 meters in some sections even.

Sung Sot is roughly divided into two sections. The first cavern is smaller and has a distinct amphitheater-like appearance with stalactites hanging down in sheets from the ceiling like colossal curtains. A narrow passageway leads to the second, much larger cavern. It is so large that it is said to be able to hold as many as 1,000 people. Stalactites, stalagmites and other unique-looking rock formations are scattered everywhere.

We’ve seen pictures of Sung Sot Cave before and were disappointed to see it awash in bright pink, green, yellow and blue (!) – the result of over-eagerness by people managing the cave to make it look more beautiful but in the process giving it a strange and unnatural appearance. Fortunately, during our visit, those brightly colored lights were replaced by plain-colored ones for the most part. This cave doesn’t need those disco lights in any case. 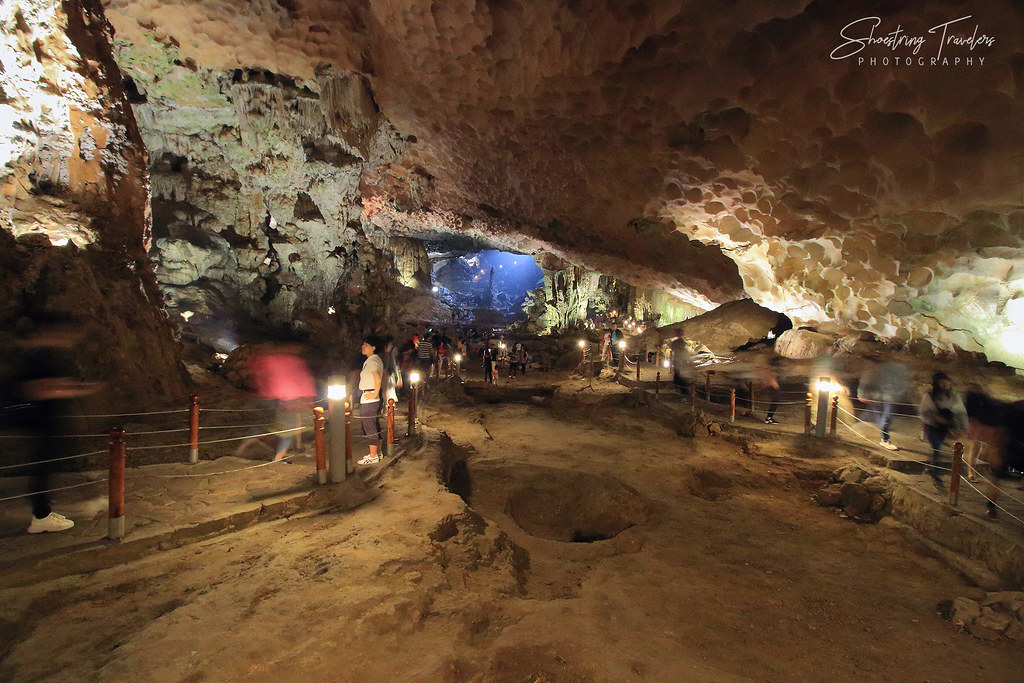 We had wanted to see one of the small fishing villages – there’s actually a small community of less than 2,000 people living right in Ha Long Bay. However, our one-day tour could not cover that. As our cruise drew to a close we sat on the view deck of our boat on the journey back, watching the karst cliffs turn dark yellow from the late afternoon sun’s rays. Soon we would be back in our van on the 2 hour drive back to Hanoi and looking forward to a tour of Vietnam’s first national university.