In the Philippines, most of the fascinating nature destinations are usually located at considerable distances from the cities. Not so in Masbate province as we would soon find out during the second leg of our 8-day visit to Ticao and Masbate Islands. 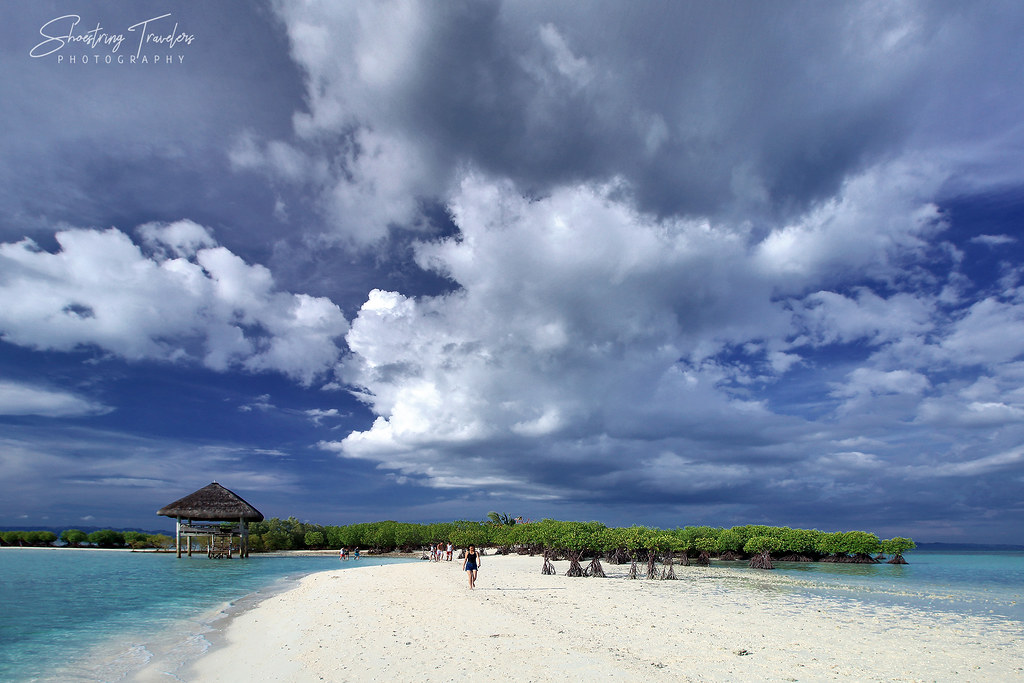 Our first encounter with Buntod Reef Marine Sanctuary and Sandbar was during our Ticao island-hopping trip. Buntod is not part of Ticao Island but it lies along the Masbate Pass, the body of water that separates Ticao from Masbate Island. It’s actually part of Masbate City, the capital of the province, and is just a short 15-minute boat ride away from that place.

Before heading for Buntod Reef however, we had an interesting first stop. Our boat had rounded the southern end of Ticao Island when it began hugging the Ticao coast again and easing its way towards an islet less than a kilometer offshore.

The Snake Island: Minalayo with Ticao Island in the background

Minalayo Island is more popularly known in these parts as Snake Island. We’ve known about and even visited a number of “Snake Islands” in the past but none of them contained snakes (at least not anymore). Understandably we were a bit skeptical about another snake island. Not so for this island, however. As we hopped from our boat into a large cavernous opening on the western side of the islet, we got to observe a few banded sea kraits, among the most venomous snakes on the planet. Fortunately, these snakes are not aggressive and are usually shy and reclusive. Bites are very rare and children even play with them in New Caledonia. They are also not fully aquatic – they are NOT sea snakes – they might hunt in the water but come to land to digest prey, mate and lay eggs.

After our engrossing encounter with the sea kraits of Minalayo it was time to move on to Buntod. It was high tide when we arrived here – when the sandbar was almost submerged under the turquoise waters of the Masbate Pass.

Buntod Reef and Marine Sanctuary covers a much larger area than the sandbar and its immediate waters. About 250 hectares in size, it was established as a protected marine area in 2001 – the result of a collaboration between the municipal government of Masbate City and local organizations. The reef was once ravaged by dynamite fishing and other destructive fishing methods but has recovered since.

Only a small section of the white sandbar is exposed during high tide; even this would have been under water an hour or so later

Even at high tide Buntod is picturesque with its crystal-clear shallow waters gradually merging into turquoise and deep blue as one moves away from the sandbar. A growth of mangrove trees lies at the northern end of the sandbar facing Ticao Island. Young blacktip reef sharks are known to sometimes loiter in the area around the mangroves at high tide but we didn’t encounter any (these sharks are relatively small, are not aggressive and are generally timid towards humans).

One of the ladies in our boat commented that this was her first time to see Buntod at high tide. She had seen it a few times before during low tide and she felt it looked better at high tide. Intrigued by her comments we determined to visit Buntod at low tide – if and when the opportunity presented itself.

Cottages on stilts near the mangrove area

That opportunity would come a few days later, as it turned out. After our outreach at Ticao Island we crossed over into Masbate City and were looking forward to meeting a group of locals. Our planned meeting did not materialize so what else to do but to go ahead and explore Masbate Island. We had checked in at Rendezvous Beach Resort along the city’s bay walk knowing that this resort is one of the 2 jumping-off points to Buntod Reef from the city.

The boat ride to Buntod was a quick one – between 15 and 20 minutes. By mid-afternoon low tide had set in. With the white sandbar now fully exposed, Buntod looked quite different from how we saw it during our first time there.

There were more people, too, mostly locals. With Buntod so close to Masbate City this was hardly surprising. Most of Buntod’s visitors had brought food with them and were dining at cottages on stilts in the middle of the sandbar. One large cottage houses the registration area and a convenience store. There are kayaks for rent here but most of the visitors were just content to swim and snorkel about or rest inside the cottages.

We returned to the mangroves where the sea had now receded to the point of exposing the mangrove roots. It wouldn’t be long before the sun started setting but we had to pack up and return to the mainland before it did. The whole scenery would have made for a perfect sunset shoot.

As we started the ride back to our resort on the mainland we thought about our boat mate’s earlier comment and asked ourselves, is Buntod better-looking at low tide or high tide? You be the judge.

There are flights to Masbate City from Manila and Cebu via Cebu Pacific and Philippine Airlines. From the city center take a trike to Rendezvous Beach Resort from where boats can take you to Buntod. Boat rental (2-way) is P500 for a maximum of 4 persons and P800 for 5-8 persons. You can also head for Tugbugan which has a docking area for boats also bound for Buntod. Lastly, there are larger boats for rent that will take groups on an island-hopping trip around Ticao Island including Buntod Reef and Minalayo Island for P7,000-8,000.

There is a registration fee of P20 per person. Table rentals range from P50 to 100. Kayaks may also be rented for P200 per hour and snorkels for P100. While there is a convenience store here, it only sells snacks and drinks. You’ll have to bring your own food.

2 thoughts on “Buntod Reef and Sandbar… at Different Tides”