Our journey from Masbate City proper to the pier at the coastal town of Dimasalang had been an uneventful one. So far so good. But as we tried to get a boat to take us to Porta Vega Beach Resort we suddenly got stuck between two boat crews fighting over who would take us on that ride. Not exactly an ideal start to a beach tour we’ve been looking forward to. 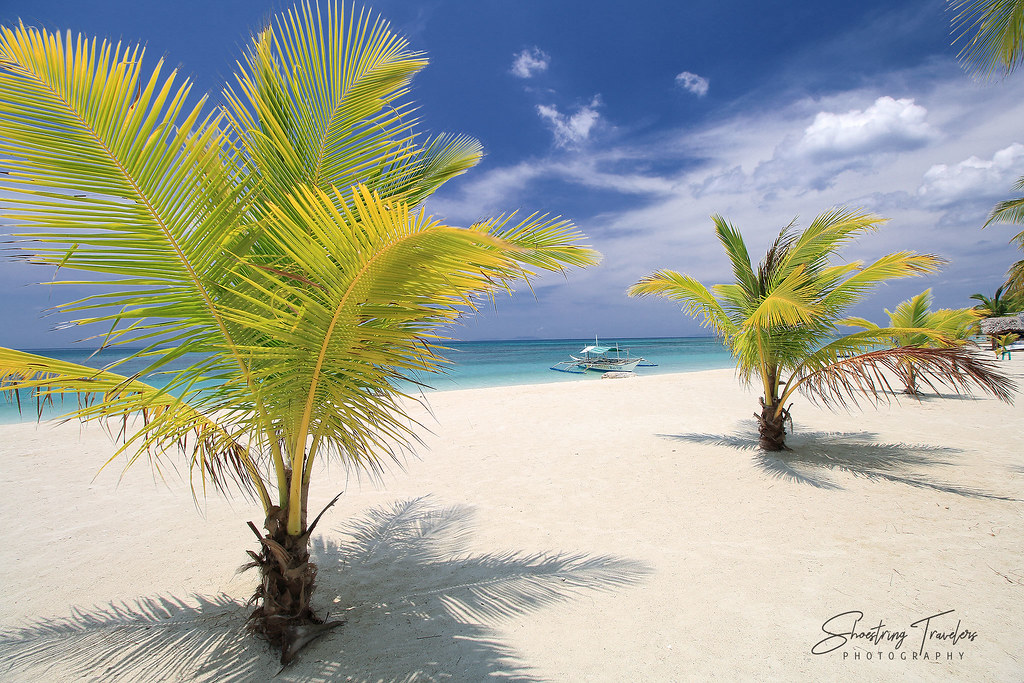 We eventually had the matter settled although we hopped aboard the boat feeling a little irritated by the commotion and unnecessary tension. That feeling was quickly forgotten as we rounded a bend in the coastline and began our approach to a pristine-looking white sand beach framed by blue skies and the turquoise waters of the Samar Sea. 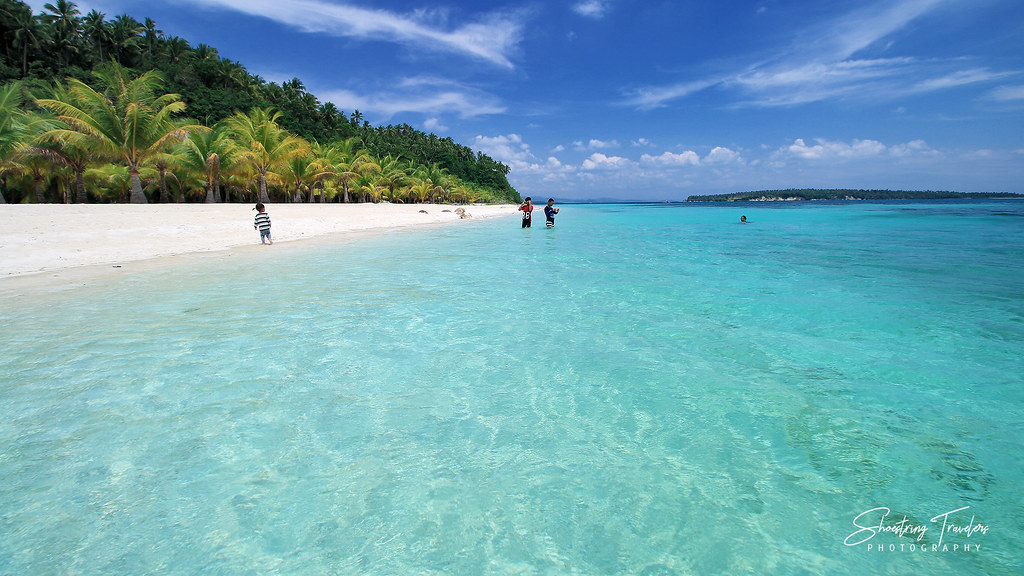 Porta Vega sounds almost like an opulent resort but it really is nothing more than a few native huts, basic comfort rooms and a small convenience store. And thankfully so. A relatively undeveloped state helps maintain this beach’s pristine character. 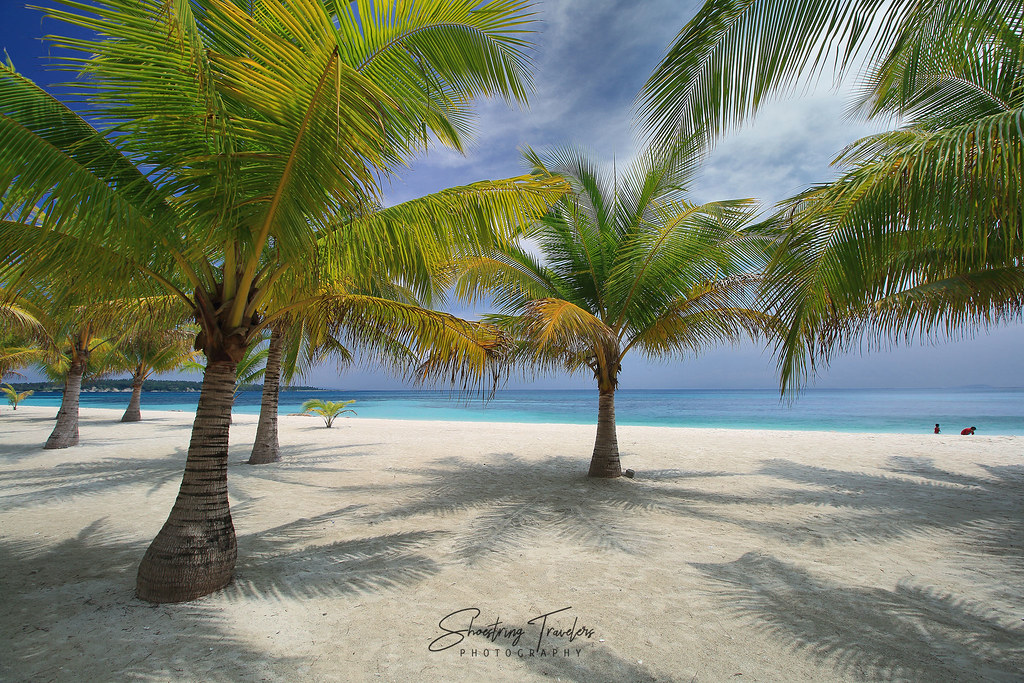 One of the two unique features of Porta Vega is a grove of dwarf coconut trees arranged in neat rows over the long stretch of white sand, something that reminded us about Sugar Beach in Bantayan, Cebu. 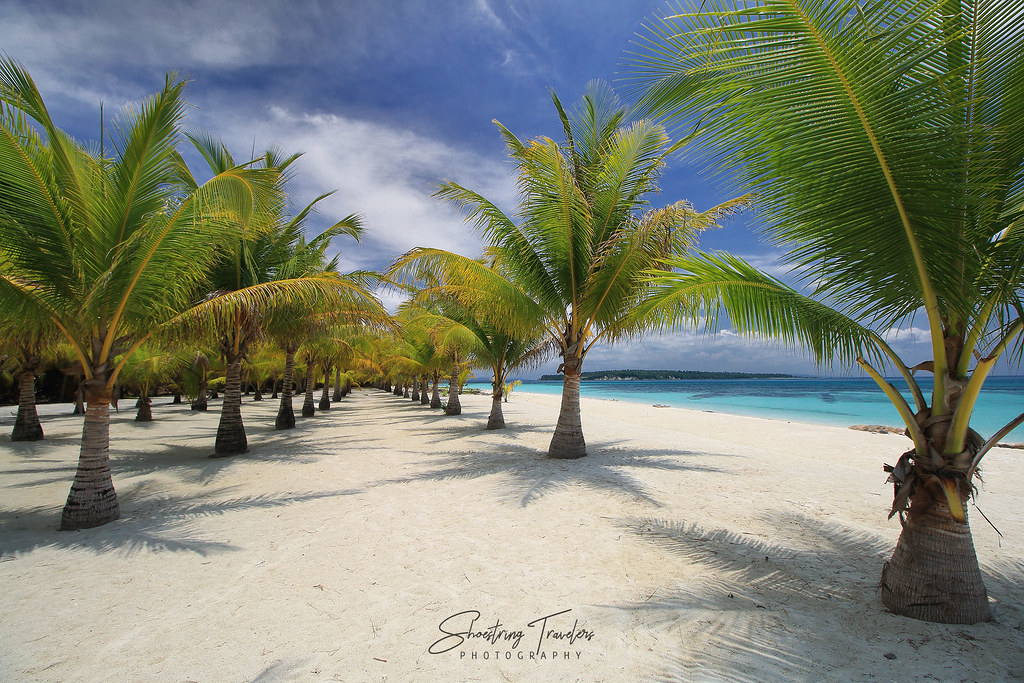 The other distinctive trait of this beach is a small chapel across a small stream inland almost hidden from view by the coconut palms. We’ve read somewhere that the owner of Porta Vega is the clan of a priest which explains the presence of a chapel in a relatively remote place like this.

The chapel at the back of the beach; with this area blocked by hills and forests, the only way to Porta Vega is by boat from the pier at Dimasalang.

Aside from a small group that came earlier we were the only visitors to Porta Vega this morning and we took advantage, exploring the grove of dwarf coconut palms and frolicking in the warm, crystal-clear turquoise waters. 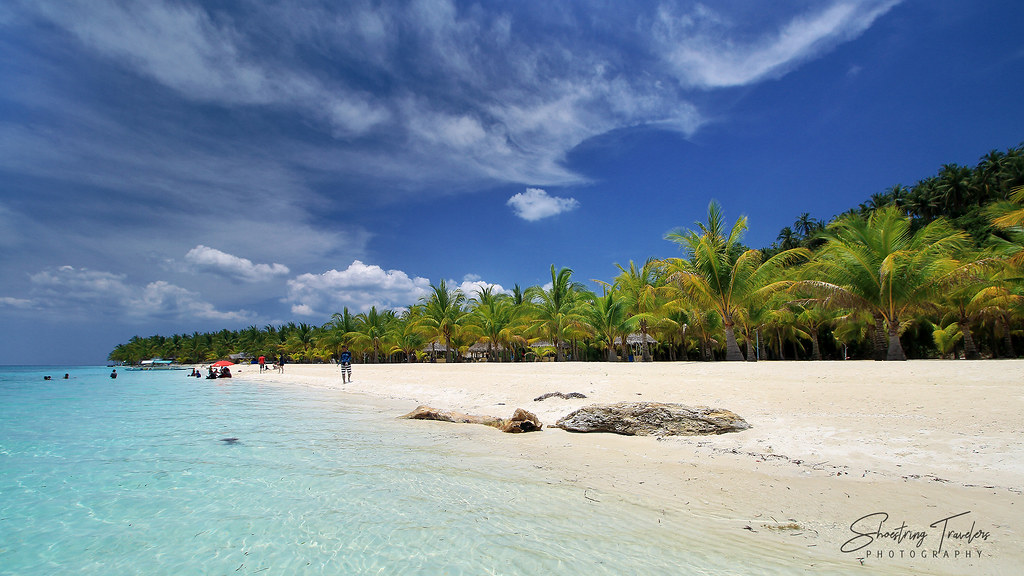 Porta Vega is still relatively unknown except to locals

The minimal number of visitors that morning betrayed how relatively little-known this beach is to outsiders. Not to locals however and, on weekends, Porta Vega becomes a place for family gatherings or a fun destination for Masbatenos. 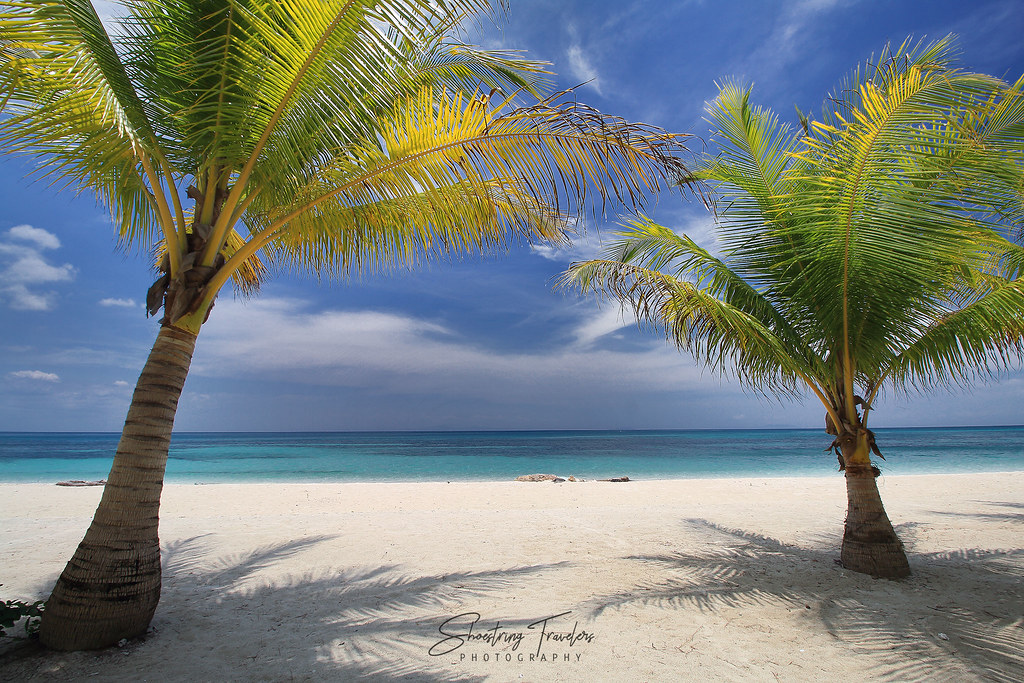 Getting lost in time

For now however we could spend our whole morning at Porta Vega getting lost in time and immersing in the beauty of our surroundings. That’s the advantage of staying in provincial areas far from urban settings where time seems to move at a very leisurely pace.

It seemed like an eternity before lunch hour came and after feasting on food we had brought and taking more time to rest we boarded our boat for a quick visit to Deagan (pronounced jagan) Island.

A beach at Deagan Island

Although Deagan Island is only 15 minutes away from Porta Vega, our boatmen weren’t too excited about going there. Arriving at a long stretch of beach near a fishing village, we thought the island wasn’t that bad although a little clean up could improve its tourism potential. We should have prodded our boatmen to bring us to a white sand beach at Deagan’s southeastern tip that looked uninhabited but was inaccessible that morning due to the low tide that would have made maneuvering among the rocks impossible for our boat.

A better destination would have been Jamorawon and Magcaraguit Islands which lie to the northwest of Deagan. Jamorawon is known to have a pink sand beach (a beach that contains small pieces of red coral mixed in with white sand) while Magcaraguit is a pristine island with a small resort. However, adding Jamorawon to our itinerary would cost double our Porta Vega tour because of the distance involved. Also, it’s probably better to take a boat going there from another docking area at Dimasalang which should be a lot closer.

For now, however, we were very satisfied with our time at Porta Vega. If given a chance to return to Masbate Island we would explore more of the other beaches scattered on this island in towns like Arroyo, Balud, Placer, Pio Corpuz and Esperanza, unpolished gems waiting to be discovered.

At the bus and van terminal near the port and market at Masbate City, ride a van going to Dimasalang proper and ask to be dropped off at the alley going to the pier. Apparently vans bound for Dimasalang are not that frequent so we ended up taking the van to Cataingan, a town located farther away. Dimasalang proper lies along the main highway so this wasn’t a problem but apparently vans to Cataingan prefer taking passengers who will go all the way to that town and it was only after the van couldn’t fill up with passengers did it finally take us in.

At Dimasalang pier take a boat bound for Porta Vega. We ended up at the boat owned by Porta Vega Resort (after an acrimonious encounter between the boat crews) and we were able to get the fee down to P1,100. It tuned out that this already included the entrance fee of P50 per person (for 4 people) plus a boat docking fee of P200 which is charged to boats not owned by the resort. (Initially the boat crew said it should be P1,500 which we thought was too much.) It’s a little tricky using other boats, however. Another boat man offered P1,100 for the ride but he didn’t tell us there would be an extra boat docking fee of P200 as well as P50 entrance fee per person.

Because we added Deagan Island to our itinerary we had to add another P200 for the trip. Adding Jamorawon Island to the mix would cost a total of P2,000.

There are open huts for rent at Porta Vega at P500 per hut (each hut can accommodate a relatively large group). We’re not sure if overnight stays are allowed here but there are no cottages that are designed for such, although the place is certainly excellent for camping. While there is a convenience store it only sells drinks and snacks so you’ll have to bring your own lunch.