As our boat cut its engine and slowly glided inside the tranquil, jewel-like, turquoise waters of Babas Cove our sights turned towards the white sand beach in front of us and the towering karst formations on both sides of the cove. But the gorgeous scene wasn’t our primary destination for visiting this side of Dinagat.

Dinagat, the second youngest province in the Philippines, is still largely unknown even to a majority of Filipinos. Despite its proximity to the now popular tourism magnet that is Siargao, Dinagat’s beaches, coves and caves are still relatively hidden from prying eyes. One of the province’s most intriguing nature spots is mysterious Lake Bababu. And the beach where we had just landed is the beginning of the trail to this enigmatic lake in the town of Basilisa.

We had not really thought much about the trek to the lake when we planned this trip but it seemed ominous that Leo lost his balance when he pulled on a loose rope, slipped and cut his feet on a sharp rock less than 2 minutes into the hike. Our wiry guide however quickly rubbed the wound with a leaf from an herbal plant along the trail and soon the bleeding and the pain stopped.

The trek wasn’t a walk in the park at all with steep 45-degree inclines to negotiate up and down and sharp coral rocks scattered along a vast segment of the trail, at times made slippery by ground muddy from previous rains. Guides are required for the trek; we also had two dogs accompany us all the way to the lake. After about 45 minutes our group finally arrived at a clearing in the lush forest and found ourselves looking down on an emerald green body of water: Lake Bababu finally. 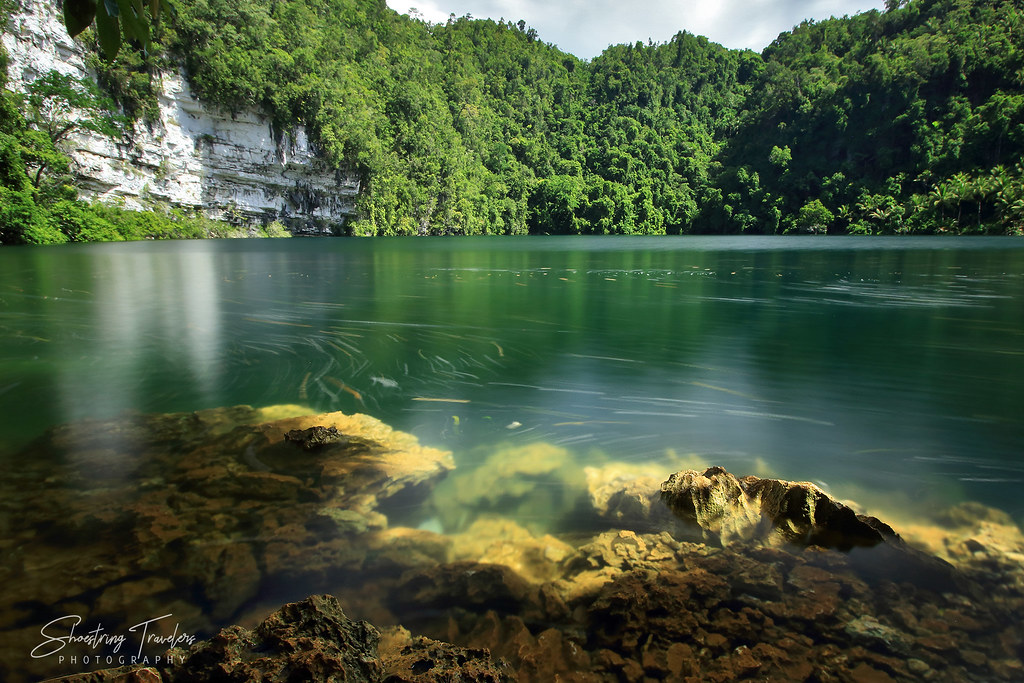 One look at the lake – the stillness of the deep green waters, the towering white limestone walls and the thick verdant carpet of the surrounding forest – and you instantly feel the mystique associated with it. Locals attest to the curative powers of the waters of Lake Bababu with some even claiming the presence of spirits in the area. We were not to be deterred by the encantos and after the obligatory photo shoot were soon happily savoring Bababu’s waters.

Surprisingly the water was warmer than that of most lakes we’ve visited elsewhere even if there are no hot springs in the area. We also saw a number of colorful saltwater fish. Large trevally (local talakitok) have also shown up at the lake occasionally; our guide mentioned that he even got to play with one while swimming. The presence of these types of fish is explained by the fact that Lake Bababu is composed mostly of seawater but with fresh water comprising the upper 20 feet layer. The two layers do not mix. Many visitors have actually drank from the clean upper fresh water layer.

But where does the salt water come from? A few years back an international team of divers discovered a 650 meter long underwater tunnel that connects the lake to the sea. It turned out to be the longest underwater cave in the country.

Going back to the beach meant traversing the same broken ground over steep inclines and the rocky, sometimes slippery trail. Surprisingly, though, the walk back wasn’t as tiring. Maybe Lake Bababu’s waters were really curative after all.

The beach at Babas Cove where the trail began offered yet another enticing swim with its crystalline turquoise waters. Two small boatloads of visitors who were on the same trek coming back had left immediately and we soon had the picturesque beach all to ourselves.

Later, one of our boatmen led us towards a short rise among the karst rocks on one end of the beach. From a vantage point we could spot more karst islands and beautiful white sand coves – all surrounded by amazing aquamarine and turquoise waters so clear as to reveal the corals underneath.

Babas Cove and Lake Bababu were truly enchanting but we were just getting started with our Dinagat Islands tour. There is so much more to come!

NOTE: The name Bababu is derived from the Visayan words baba sa buwaya meaning a crocodile’s mouth. The latter refers to the shape of Babas Cove and no, it does not mean there are crocodiles around.