Before we set foot on Dinagat we already knew that Bitaog Beach is one of the best in the province. During the first day of our island-hopping tour, however, we realized that the island where Bitaog is located – Unib Island more locally known as Lalaking Bukid – is home to at least 4 other beautiful white sand beaches.

The name Lalaking Bukid means “male mountain” in the local dialect. This island lies just offshore from the towns of Basilisa and San Jose on Dinagat Island and is actually part of Basilisa town. Coming from Lake Bababu and Babas Cove – our first island-hopping destinations – we set off for Duyos Beach on the southwestern corner of the island.

Duyos Beach has a wide white sand beach, a lush forest of coconut palms, crystal-clear turquoise waters and a gorgeous sandbar – a typical tropical setting. It also has several cottages and even a videoke bar. 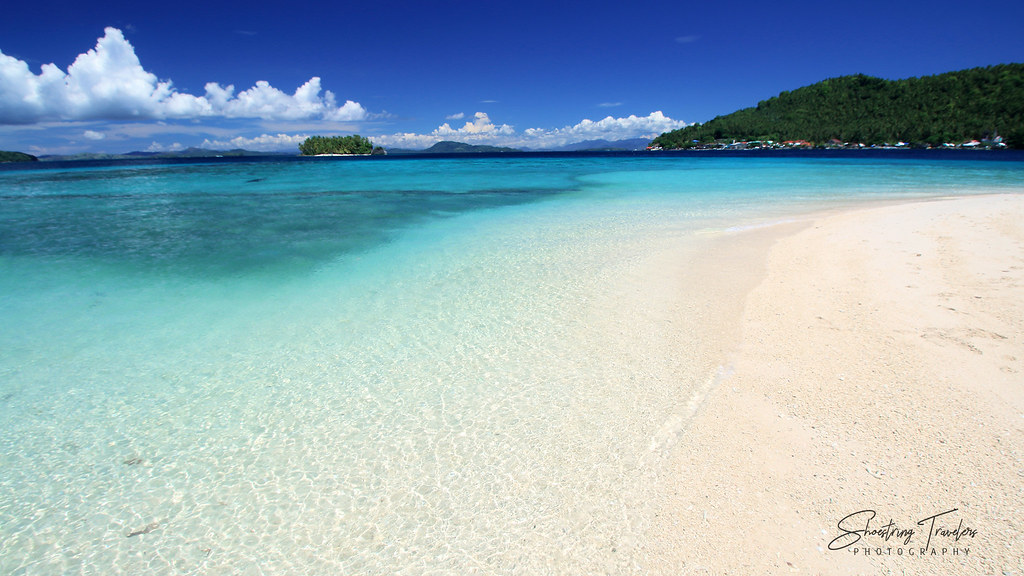 In retrospect this is the most crowded beach that we visited in our two days of island-hopping at Dinagat and seems to be a favorite among locals. It was lunch time when we got here which probably explains the considerable number of visitors, mostly locals – probably because the rental cost for the cottages is cheaper than other island beaches elsewhere.

“Crowded,” however, is not a fitting description for Duyos Beach and there are some locations on the beach where one can find a quiet retreat. And despite the crowd the beach has remained pristine and clean.

After enjoying Duyos’ white sand and lucent waters it was time to move on to our next stop. Just 10 minutes away by boat to the northeast and along the southern coastline of Lalaking Bukid, Bitaog Beach has often been singled out as the best beach in all of Dinagat.

Arriving at Bitaog’s immaculate creamy white sand beach it wasn’t hard to see why. Although the beach isn’t as wide or as long as Duyos the sand is very fine – almost like Boracay’s. The beach was already beginning to retreat under the shade of tall coconut palms and limestone cliffs as the afternoon wore on so we weren’t able to take good shots of the strip of white sand in all its glory.

Towering karst formations carpeted by thick foliage bordered both sides of the Bitaog Beach – a landscape that is quite similar to that of El Nido and Coron in Palawan and the Caramoan Peninsula in the Bicol Region. 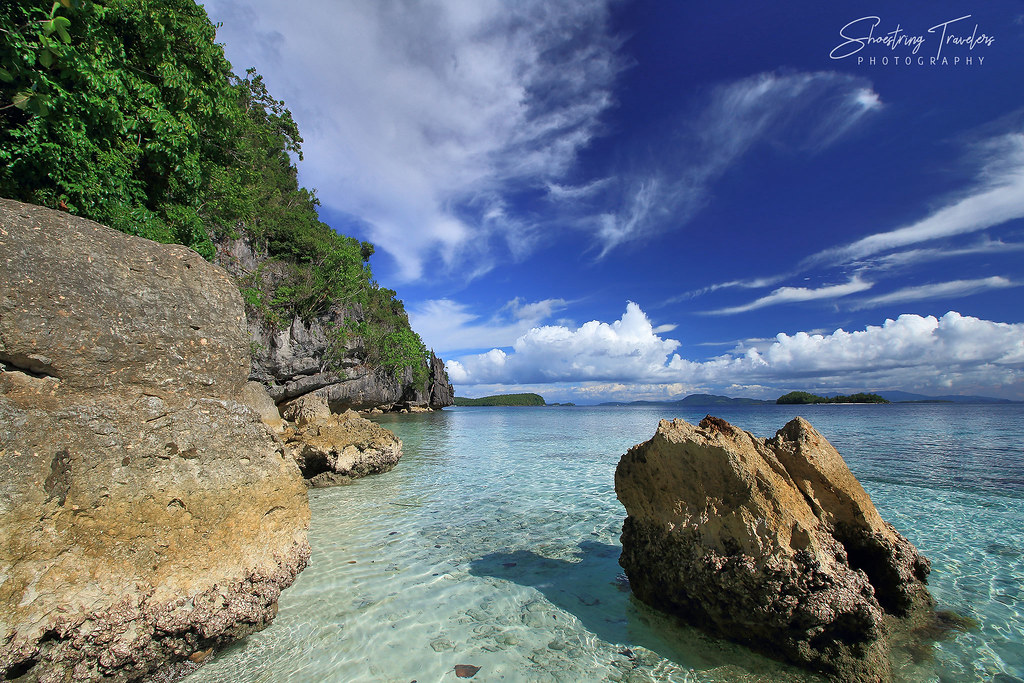 Exploring both the eastern and western extremities of Bitaog brought us to more fascinating rock formations straddling the aquamarine and turquoise waters and even a spring gushing out from beneath the towering karst walls. This beach cemented our opinion that Dinagat compares very favorably to El Nido, Coron and Caramoan with one attractive exception – there are very few visitors here for the moment.

At the extreme western end of Bitaog Beach we spotted another white sand beach which in Google Maps is named Gealan Beach. We didn’t have time to explore Gealan Beach as our boatmen and guides signaled us that we would be leaving soon for the last destination on the day’s island-hopping itinerary. 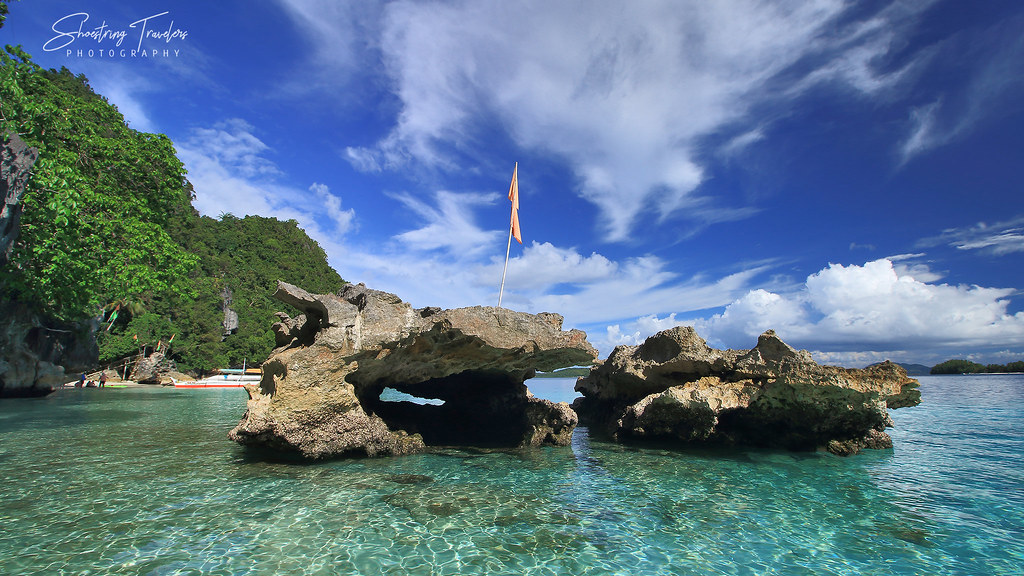 That last destination turned out to be Pagkawasan Beach slightly more than a kilometer to the east of Bitaog Beach. It was late in the afternoon when we arrived here, with the sun playing hide and seek among the clouds.

At the eastern end of Pagkawasan is a group of coral rocks jutting out of the shallow turquoise waters. Our guide led us to a flight of steps up a massive rock to gain an overhead view of the rock cluster. That’s when we saw a grotto carved out of the rock. Our guide told us that it was built by a guy who discovered a haul of gold bars at Pagkawasan, purportedly part of the fabled World War 2 Yamashita treasure of which we’ve heard about in these parts. (Interestingly the Battle of Surigao Strait in 1944, the last battle between big gun battleships took place just to the east of these islands.)

Pagkawasan is actually a pair of white sand beaches with a longer stretch of white sand shaded by a grove of coconut palms at its western side that we had wanted to explore further. However, with sunset approaching we had to pack up for the return ride to the pier at San Jose. In retrospect, 2 days of island-hopping was barely enough to cover the beaches, islands and rock formations on the western side of Dinagat. And we didn’t even get to tour the eastern coastline of the province and its inland destinations.

There’s one more destination at Lalaking Bukid worth mentioning: Cabacungan Cove on the northwestern section of Lalaking Bukid. This used to be included in the island-hopping tour we had arranged with Jmalls Island Tourist Inn where we stayed but during the past months this beach has been closed to visitors. Whether this was due to questions about ownership or failure by the owners to abide by government regulations we couldn’t remember but one of the more recent posts we read online mentioned that they had stumbled across abandoned huts that looked like part of a basic resort on the beach.

It was a minor disappointment since Cabacungan is known to have a fine white sand beach with beautiful rock formations surrounded by imposing karst cliffs where a flock of hornbills and sea eagles are known to be residing. Still, our visit to Lalaking Bukid went beyond our expectations, a tour of some of the most virgin beaches you will see in the Philippinnes.

(Note: Jmalls Island Tourist Inn does not compensate us for including them on this post. Our decision to do so is voluntary.)