We were looking forward to visiting two spots that figured prominently on pre-arranged island-hopping tours as far back as a year ago when our planned trip to Dinagat was unexpectedly aborted. But when we finally made it to the provincial capital of San Jose last month we found out that we would not be able to visit Cabacungan Cove and Sundayo Beach. Both were off-limits to visitors for the time being.

Karst formations along the Melgar Bay coastline at Basilisa

Instead of Sundayo, our boat crew and guide took us to an island just at the back of Hagakhak Island off Basilisa town where Sundayo Beach is located. On the way there, as in our previous day of island-hopping, our boat hugged the coast of Melgar Bay in Basilisa enabling us to have a good view of the rocky shoreline.

Identified as Little Hagakhak on Google Maps, this small island west of larger Hagakhak Island has practically no sandy beach to speak of but has a collection of huge sedimentary rocks. Our boat docked on the island’s western side and we proceeded to tour Little Hagakhak on foot. 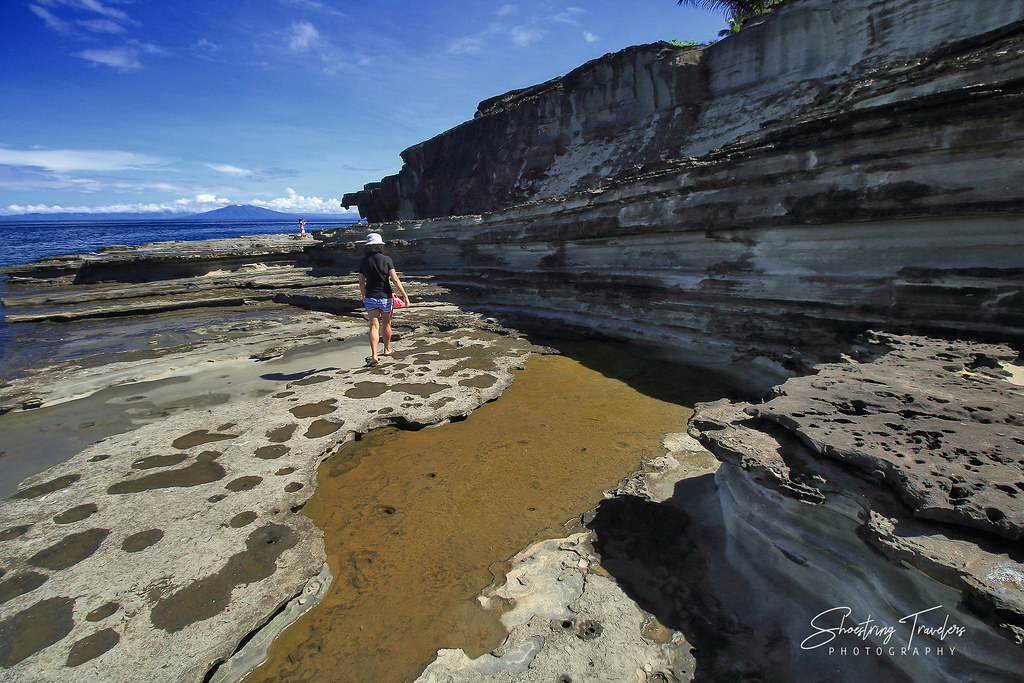 Neatly-laid layers of sedimentary rocks on Little Hagakhak Island; notice the clarity of the water.

Hopping along the perfectly laid-out horizontal layers of the island’s rock formations, we made our way to the northern section of Little Hagakhak where the rocks took on even more unique shapes.

There were just two boatloads of visitors here when we arrived including ours; but we saw a small makeshift stall selling snacks (!) just to the right of this mass of rock.

After Little Hagakhak we would spend most of the morning and early afternoon touring the stunning islands, coves and lagoons in Libjo up north including Pangabangan Island and its Blue Lagoon and Punta Villa. The rock formations of Libjo are even more spectacular. Our only regret is not having more time to explore this place.

Towering karst formations at Pangabangan Island are typical of the topography of Libjo’s coastline.

On the way back to San Jose port after our Libjo adventure we stopped by an island just to the northeast of Little Hagakhak. Isla Aga is a private property of a member of the Ecleo clan, the most influential family in Dinagat. The island – or more appropriately, islet – is a composite of a few massive karst formations. A series of steps up precipitous inclines leads up and around a karst cliff down into a beach opposite the docking area for boats.

A vacation house was built atop one of the karst cliffs here as well as a hanging bridge connecting the top of two large rock formations. The house has long been abandoned and is now all but run down. A single rope is all that remains of the hanging bridge.

All that remains of the hanging bridge at Isla Aga

Despite the run-down nature of the structures on the place (and the totally irresponsible graffiti on karst rocks down by the beach), the island is beautiful in its own right. And climbing up to the highest point of the island gave us a majestic view of nearby islands to the west and the surrounding waters of different shades of blue and green.

View of surrounding islands and waters atop a karst cliff; in the lower center of the photo is a small rock formation on Isla Aga’s solitary white sand beach

Unlike Little Hagakhak which has no beach, Isla Aga has a small trip of white sand on its western side. The crystal clear waters off this beach reveal scores of colorful reef fishes and would have made a good place for snorkeling had we more time on our hands.

Isla Aga and Little Hagakhak Island may be reached via island-hopping tours from San Jose town at the main island of Dinagat. Go to this page for more directions about reaching Dinagat.