The weather during the better part of August wasn’t conducive to a nice and short road trip so when the skies cleared recently we grabbed the chance. Along with three other friends, we motored off to the northeastern section of Laguna province and into the quiet town of Cavinti while passing the heritage town of Pila along the way.

We’ve been to Cavinti before but our friends were visiting its attractions for the first time – except for the famous Cavinti Falls, formerly known as Pagsanjan Falls of the shooting-the-rapids fame, which we’ve all visited eons ago.

LEFT: a bunch of hairy rambutans; RIGHT: ‘tis the season for the lanzones

But first something for the appetite: Nina and our friends have been looking forward to sampling local fruits sold in stalls along the national road. Incidentally, it’s the season for the hairy rambutan and the smaller but fleshy lanzones (English langsat, scientific name Lansium parasiticum). We haven’t gone too far from the Pagsanjan-Cavinti boundary when we encountered the first line of fruit stalls selling these.

Cavinti is the largest town in Laguna in terms of total land area but it’s also one of the least populated. Its rural atmosphere contrasts sharply with the Laguna towns we’ve passed by on the way here. A large part of Cavinti is forested and contains many natural attractions including waterfalls, lakes, caves, rivers and hills. However, on this day, we just kept to nature spots easily accessible from the major highway running through town. 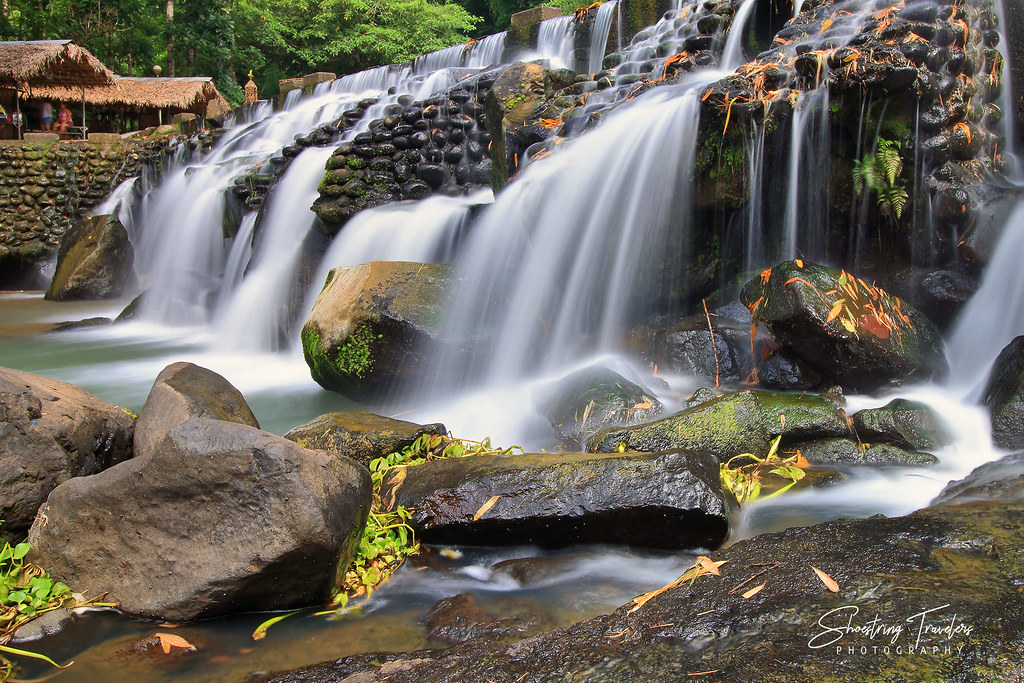 First on our list was Bumbungan Eco Park in Barangay Tibatib, an area around a dammed section of the Bumbungan River that used to form part of the Lumban-Caliraya-Cavinti Road. Nothing seems to have changed since our 2017 visit. The quiet surroundings accentuated by native cottages, the emerald green waters and the cascades formed by water spilling over the roadway combined to sooth nerves still smarting from the clutches of Manila’s urban jungle.

Dammed section of the Bumbungan River

The waters at Bumbungan didn’t seem too enticing for a swim but we really didn’t plan on that. We were content with chilling and enjoying the idyllic scenery – a place where we can just while away the time.

A short drive away from Bumbungan Eco Park, on the Lumban-Caliraya-Cavinti Road, is Lumot Lake. Also known as Sierra Lake, this body of water was created when the Lumot River was dammed to create an auxiliary reservoir for nearby Caliraya Lake. Together the two lakes supply water for the Kalayaan hydroelectric power plant. Although we’ve been to Caliraya – once a favorite for retreats, conferences and seminars – more than a dozen times in the past, this was our first foray into Lumot Lake.

While resorts abound at Caliraya Lake, Lumot Lake is relatively undeveloped although it has become a favorite for largemouth bass fishing like its big sister. A large section of the lake is already visible from the Lumban-Caliraya-Cavinti Road so we simply parked the car on the side of the road and took in the view.

Not content with savoring the tranquil scenery from the roadside we trudged down a path that led to the shores of the lake. A pastoral scene of water buffalos grazing on green grass near a clump of boats greeted us. It was very tempting for Leo to shoot a few frames but we deemed it a little risky to get too close to these beasts of burden.

We were in this part of Laguna just to chill and rest so adventurous pursuits were out of the question for now. It was already late in the afternoon by the time we were done with Lumot Lake. Afterwards it was a short drive to Pagsanjan and a quick snack at Aling Taleng’s Halo-Halo before the return trip to Metro Manila’s horrendous traffic and the comforts of home.