Metro Manila’s horrendous traffic and vehicle number coding schemes would sometimes force us to leave early for a trip outside the metropolis. And so last Tuesday, on the way to the wake of a friend’s sister in Lucena City in Quezon province we had to leave at 5:30AM since our car was off-limits on Metro Manila’s streets that day from 7AM to 8PM. That meant arriving in Lucena by 8:45 AM which is way too early for a funeral wake in the Philippines.

No problem. We decided we would spend the whole morning on a not-too-out-of-the-way detour, a town we’ve visited a few times before: Majayjay, Laguna.

Majayjay is a quaint town tucked away on the eastern edges of Laguna province and at the foot of Mt. Banahaw. A sizable portion of the town is forested and includes two major tour destinations: Taytay Falls and Bukal Falls, both lying near the foot of the dormant volcano.

We’ve already been to both waterfalls and touring them anyway would take more time than what we prefer. We decided instead to tour other areas of Majayjay beginning with the San Gregorio Magno Parish Church (St. Gregory the Great Parish Church), one of the oldest of its kind in the country.

Located in the center of town, the Romanesque-styled San Gregorio Magno Parish Church was first built in 1571 but was severely damaged by fire twice. The present structure was completed in 1734 and has undergone several rehab efforts after suffering more damage from typhoons and wars. Like the San Agustin Church in Paoay, Ilocos Norte, this church has unusually thick buttress walls – 3 meters – a feature of earthquake-resistant churches in the country. 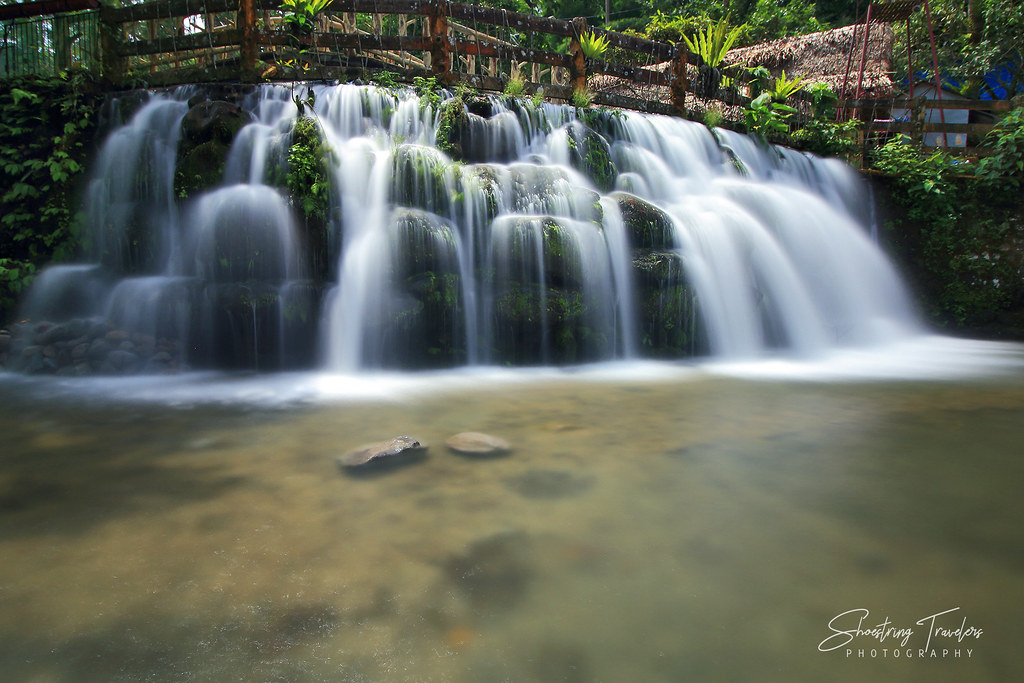 After wandering around in the town center and snacking on kutsinta (even brown or steamed rice cake) and local noodles in an eatery next to the church it was time to head on to our next stop: the Dalitiwan Resort in Barangay Ilayang Banga on the road to Lukban.

Bees and butterflies at Dalitiwan Resort

Dalitiwan Resort features a natural stream of cold spring water flowing from Mt. Banahaw and sits in the middle of a forested area. The lush gardens inside the resort were a welcome sight for eyes accustomed to the big city’s concrete jungle. We were particularly delighted by the presence of several bees and butterflies happily gorging themselves on nectar, although the more colorful ones were quite evasive.

The stream at Dalitiwan Resort

The cold stream running through the resort collects in pools formed by rocks in several places, making them suitable for swimming. (No doubt the resort also arranged some of the rocks and created barriers in other places to form these basins.) There’s also a man-made pool on the side of the stream that cascades down as a waterfall into the stream below – the main feature of this resort.

Activated: we had to wait for about an hour to get to see the waterfall inside Dalitiwan

Curiously this waterfall was nowhere to be found when we first arrived at Dalitiwan. It turns out that the resort management was cleaning out the pool that fed water into the falls so we had to wait – less than an hour fortunately – until they could finish the clean-up, refill the pool and get the falls going again.

Our main intent for visiting Majayjay, however, was just a simple break from our daily routine and for solitary moments in a natural environment. So when lunch time came we headed up towards another garden resort, this one featuring a restaurant.

Flower garden at the Samkara Restaurant and Garden Resort

Samkara Restaurant and Garden Resort also lies along the Majayjay-Lukban-Lucena highway, making it a suitable stopover on our way to visiting our friend and her sister’s wake in Lucena. Surrounded by farm land and forested spaces, the resort features comfortable family bungalows and dainty gardens. Our lunch was served in an airy restaurant. Even with a number of visitors around, the resort’s atmosphere is so relaxing we had to order coffee after lunch to avoid dozing off.

LEFT: one of the overnight accommodations at Samkara. RIGHT: the restaurant

That coffee would serve as a tonic on the drive to Lucena where we unexpectedly encountered a sudden heavy thunderstorm resulting in flooded portions of the highway. But our nerves were sufficiently soothed by our Majayjay stopover, something that would serve us well on the eventual long return drive back to Metro Manila from Lucena.