Despite being to Dumaguete four times, we’ve never made it to the Twin Lakes in nearby Sibulan town. Part of the Balinsasayao Twin Lakes Natural Park, the Twin Lakes of Balinsasayao and Danao are among the top destinations for visitors in the area around Dumaguete. So it was a foregone conclusion that we would be going there on our latest visit to the city. 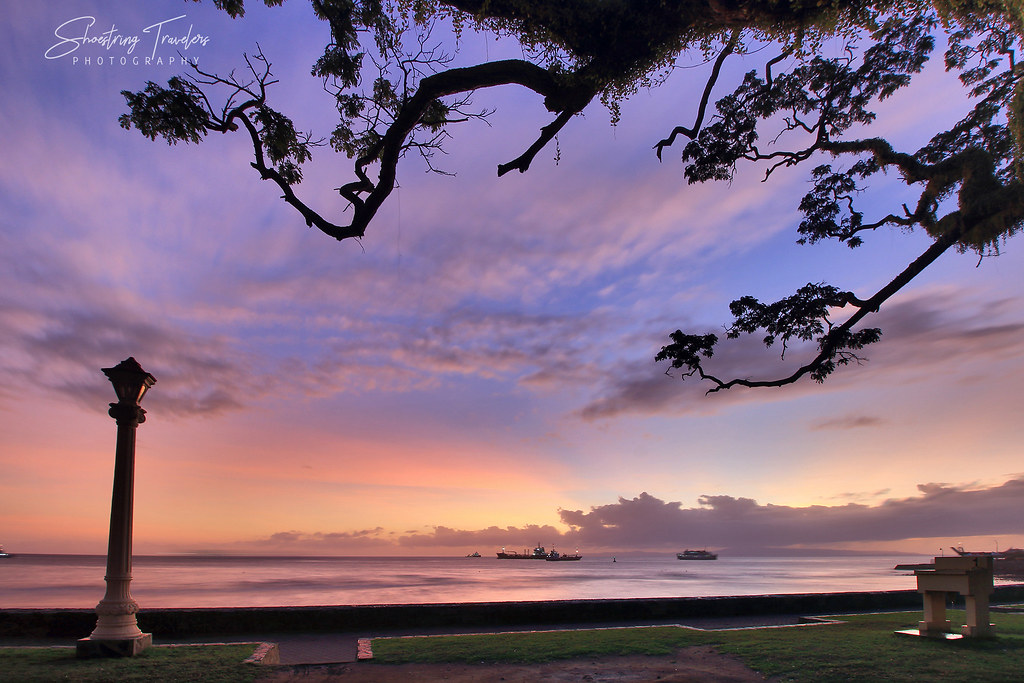 Tour packages from Dumaguete City may be arranged to go to the Twin Lakes and to either Pulangbato Falls or Casaroro Falls in Valencia (plus other destinations in that town along the way) in one day. Since we were in a group we decided to just rent a van for that purpose – a wise decision as it would turn out later.

Forest above the clouds: a dipterocarp forest at the Balinsasayao Twin Lakes Natural Park

The Twin Lakes Natural Park are situated almost a thousand feet above sea level in the highlands that cover Sibulan, Valencia and San Jose so that our ride was on a winding road uphill. Along the way we passed by extensive forested areas along with views of distant Cebu and the Tañon Strait. We also passed a group of European cyclists, many of them senior citizens. Our driver and tour guide mentioned that there was an event in the province featuring cyclists from other countries. 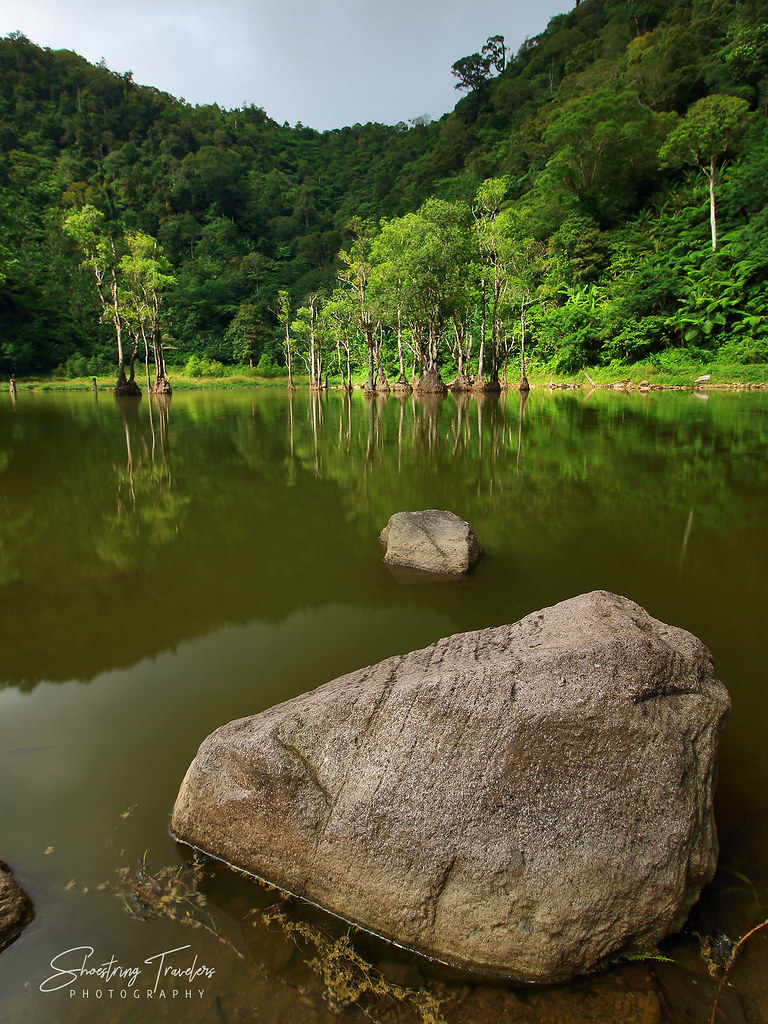 We reached the entrance gate to the Twin Lakes in about 30 minutes from the detour at the national road from Dumaguete. Visitors are required to register here, pay the P50 entrance fee and be briefed about the park. Just by the side of the entrance gate is a miniature, fascinating lake – actually more like a large pond – Lake Kabalin-an. 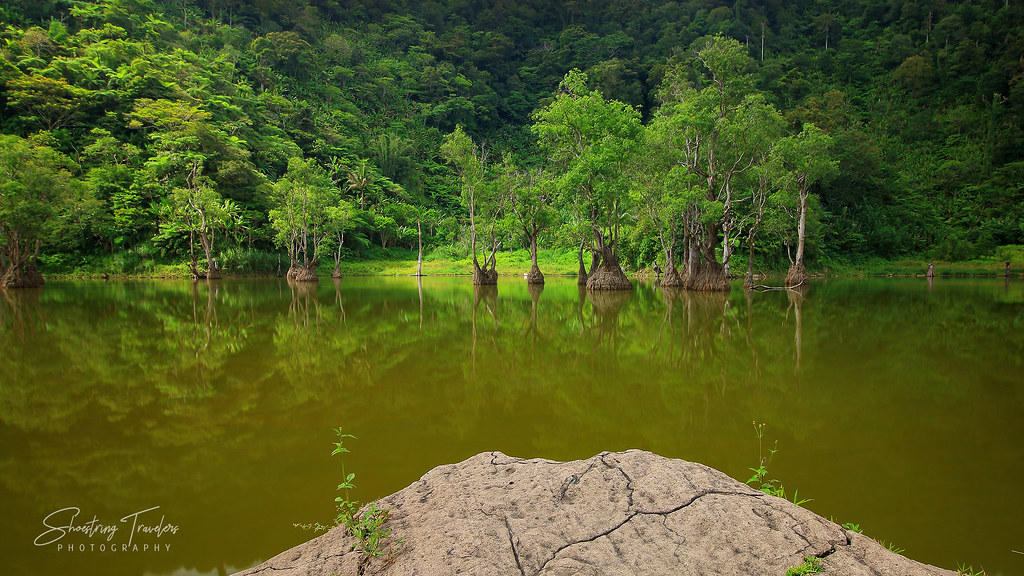 The line of trees at Lake Kabalin-an…

… gives this body of water a mystical personality.

Visitors have often described Kabalin-an as mystical-looking and that’s probably due to the effect of a line of trees inside the still waters. It’s a photographer’s favorite and Leo spent some time taking photos on the banks of the lake and among the rocks lining its periphery. The rest of the group occupied one of the huts by the lake savoring the serene ambience.

Would have spent more time here enjoying this lake’s tranquility but for the grey clouds overhead.

With rain clouds rolling in, we decided to cut our time at Kabalin-an and head for the restaurant located just before the descent into the Twin Lakes. There’s a view deck here that gives a nice view of Lake Balinsasayao – the first of the Twin Lakes – framed beautifully by the surrounding dipterocarp forest. Afterwards it was down the steep but relatively easy descent to Lake Balinsasayao.

Lake Balinsasayao seen from the view deck at the restaurant

Lake Balinsasayao and its twin, Lake Danao, are crater lakes created by tectonic and volcanic activity. Only the former is visible once you make the descent from the restaurant. The western and southwestern sections of this lake are also hidden from view at this point. To see Lake Danao visitors have to walk along a path through the forested shores of Lake Balinsasayao for 30 minutes to get to a viewpoint on a low ridge that straddles the boundary between the two lakes. Boats are also available to take visitors to the same viewpoint.

We did spot a boat take a trio of Chinese tourists to the Lake Danao viewpoint while a European gal opted for the trek. We took one long look at the grey skies and had second thoughts trying either option, especially since a dense fog was beginning to hover over the lake. When asked if these signs precluded a heavy downpour, the park staff could only look at us and shrug that there’s a probability that it would rain soon and maybe for an extended period.

Sure enough while we were sitting at a hut overlooking the lake and the boat parking area it started to rain – gradually and then in sheets. We waited for the rain to stop but it would alternately decrease in intensity then start pouring again voluminously. After a while the boat carrying the 3 Chinese ladies appeared out of the fog; the three girls were soaked to the skin even with the huge umbrellas provided for them. We waited for the rain to stop, probably for an hour. When that didn’t seem likely we decided to make a dash back for the restaurant uphill – Leo with his bad back and one of our friends with her sprained ankle.

Back at the resto we encountered the group of European cyclists and the lone trekker drying off. It was then that we realized how our choice of a van was a wise one. An option to traveling here was to take a jeepney or bus ride from downtown Dumaguete to San Jose town and the La-laan junction where one can then get a habal-habal (motorbike) to drive up the hills to the Twin Lakes. Had we chosen the latter we would have been in worse shape!

On our way back we had planned on dining at the Alimyon Restaurant and Bar along the road. This resto is located on the side of a hill offering excellent views of the countryside including Cebu island and the Tanon Strait but with the rain coming down in sheets again we decided to hightail it and just have lunch by the sea near downtown Sibulan where it was completely dry. It might have been disappointing to get stranded by the rains and not see Lake Danao but these adventurous souls still enjoyed the experience. And there was another destination waiting for us after lunch.

How to Get to the Twin Lakes from Dumaguete

The first option is to go on a package tour that will also include destinations at nearby Valencia town (Casaroro Falls or Pulangbato Falls and perhaps Tierra Alta). Some of the hotels in Dumaguete are offering this package or you can do a search online. With the help of friends in Dumaguete we rented a van good for 10 people that costs P4,500 total.

As we mentioned, another option is to ride a jeep headed for Amlan and get off at the La-laan junction in San Jose where the road leading upwards to the Twin Lakes begins. At the junction are several habal-habals (motorbikes) with drivers waiting to take you to the lakes.

One thought on “Rained Out at Sibulan’s Twin Lakes”