Years ago we’ve made it a point not to visit the same place twice, especially destinations located far from home. More recently, however, we’ve become more comfortable at retracing past jaunts. Siquijor is one such trip – an expedition primarily to accompany friends who have never been there.

We only allotted a day to tour the whole island of Siquijor from our resort at Lala-o in San Juan so we had to be selective with the places we intended to visit. After our drive and short stay at Paliton Beach we hit the road again on our rented multi cab bound for Salagdoong Beach in Maria town. 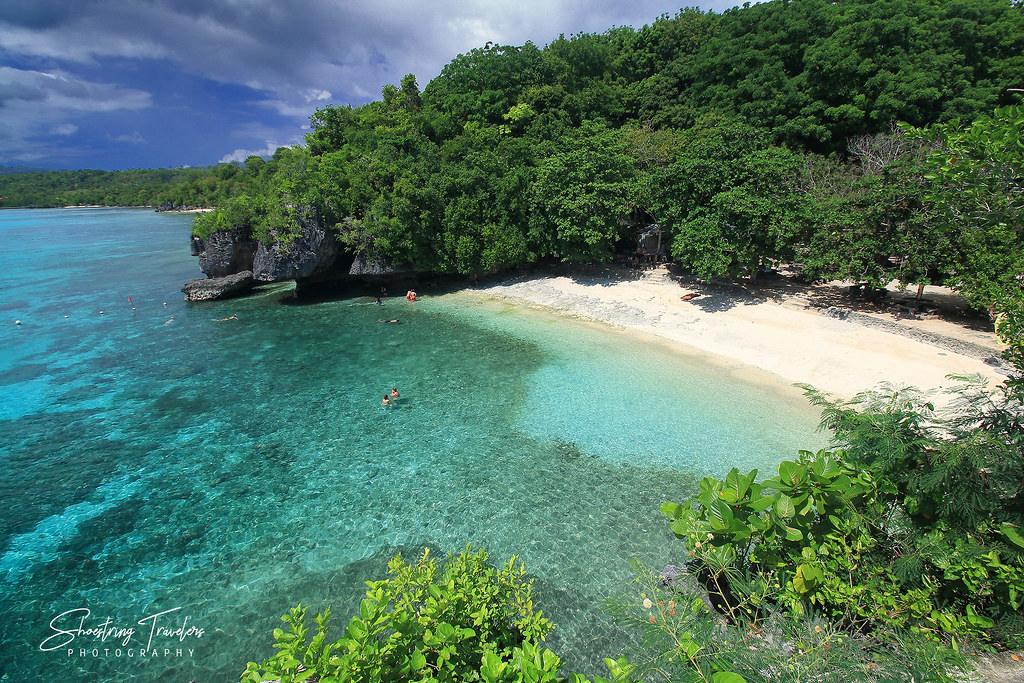 As our multi cab made its way towards and around the northern tip of Siquijor and the town of Maria, we passed by some pretty familiar sites including the Dumalaay Boulevard and its coastal scenery and the approach road to Sandugan Beach where we had stayed in 2013, both in Larena town. After Dumalaay most of the highway runs inland so that the white sand Sandugan Beach is hidden from view. 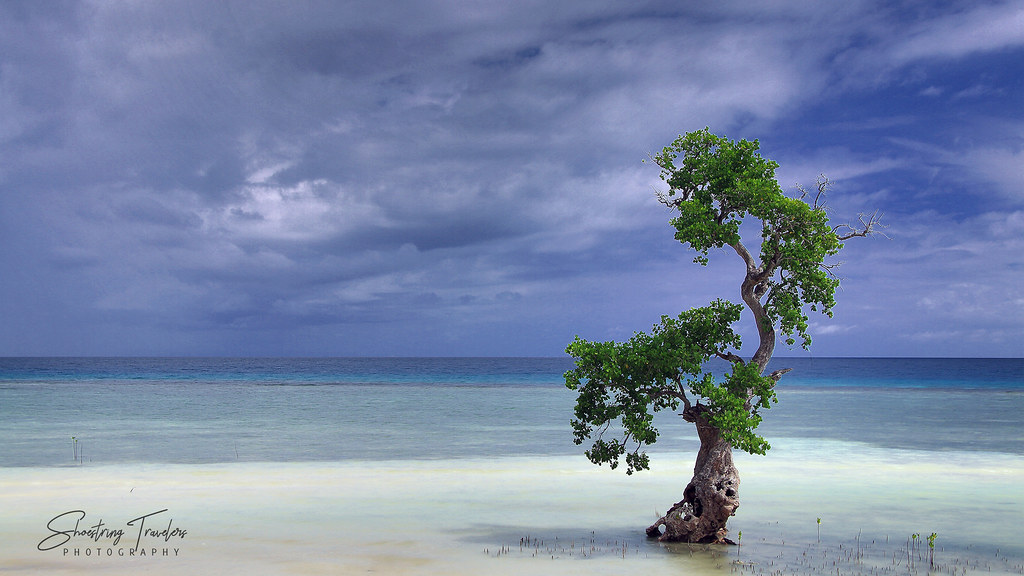 Mangrove tree along the coast at Bino-ongan, Enrique Villanueva

A few minutes of driving later the coast re-emerged, marked by concentrations of mangrove trees close to shore. We knew we were now in the town of Enrique Villanueva with the Tulapos Marine Protected Area (MPA) lying just off the mangrove forest along the sea shore. Just south of Tulapos is the Bino-ongan MPA and a small clump of mangrove trees along the coast – a favorite spot for photographers.

Siquijor is a known diving spot in the Visayas and numerous marine protected areas or sanctuaries are spread out all over the island.

After our photo shoot at Enrique Villanueva we drove on to the town of Maria and Salagdoong Beach. The main highway at this point does not pass along the coast so we had to take a detour down a road that passes right through a man-made forest of molave trees. These trees were planted some 60 years ago. The road (named Salagdoong Forest Road in Google Maps) stretches for about 2 kilometers from the main highway before ending at Salagdoong Beach. 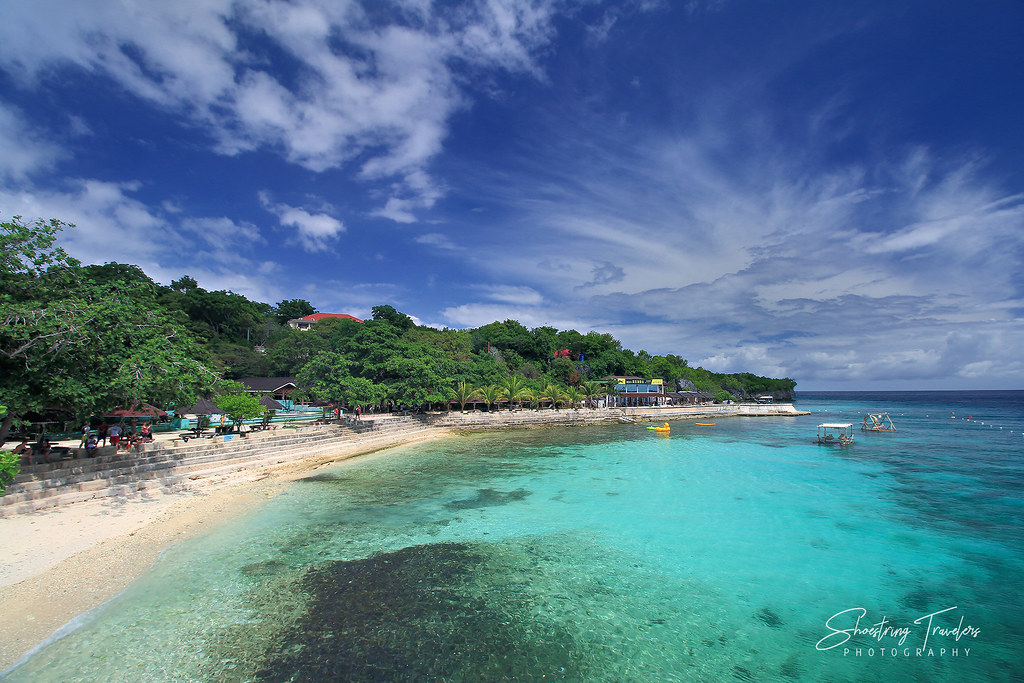 The most popular beach in Siquijor, Salagdoong Beach is government-owned and managed. Even during our first visit here in 2013 we’ve already observed that it was the most developed of all the beaches we’ve toured in Siquijor and remains so to this day. There are concrete tables, benches and huts that line the shore, a restaurant and rooms for overnight accommodations. But a rather irritating structure is a water park that according to Lonely Planet “has seen better days.”

One of the slides at the water park

This water park contains 2 dive platforms set at different heights – one at 6 meters and the other at 12. There are also two water slides although one has already been closed for reasons we weren’t able to verify. It’s a rather unsightly-looking structure but otherwise Salagdoong Beach has maintained its gorgeous appearance over the years.

South of the water park is a beautiful cove lined by a white sand beach and karst rocks at its southern end. You’ll find majority of the bathers on this stretch of Salagdoong and this was where we spent majority of our time on the beach. You can also see some small fishes just offshore but you’ll need to swim farther out to see much more.

The beach and karst formations at Salagdoong’s southern segment

North of the water park is a longer stretch of coarse-grained white sand beach where the rooms for overnight accommodations are located. The color of the waters here are even more striking and very inviting for a swim although majority of visitors seem to prefer swimming on the southern stretch of Salagdoong.

The northern half of Salagdoong Beach

From Salagdoong we were hoping to retrace our steps in 2013 and revisit beautiful, secluded Kagusuan Beach, also in Maria. Our multi cab driver, however, said that the narrow road going to Kagusuan has been declared off-limits to vehicles because of frequent theft among vehicles parked at the entrance to a long-abandoned resort there. It seems we would have to walk a considerable distance to get to the beach and we just did not have the time to do so on this day.

Kagusuan Beach during our visit in 2013

(There’s a white sand beach cove just west of Kagusuan sometimes called Looc Beach or Minalulan Beach after the barangay that has jurisdiction over it. This cove shelters a fishing village, a lighthouse and the Sabas Beach and Campsite. There’s also a marine sanctuary nearby. This cove appears to have good tourism potential although much of the beach property is now owned privately.)

After spending some time swimming and chilling out a Salagdoong Beach it was time to motor further south and into the town of Lazi for late lunch and a few more spots to visit. In our next post…