Coming back each time from an assignment overseas back in the early 2000s, we still had to make a 6-hour bus or van ride up the rugged Cordillera mountains before we could bed down for the night. Not exactly a comfortable arrangement but when home is among the pine trees of a mountain town in a tropical country, it’s a place you always look forward to returning.

The Baguio Cathedral near Session Road, a city landmark.

Baguio City was our home from 1998 to 2004. Since then we’ve returned to visit the country’s summer capital a few more times, each time reminiscing about the past while noting the many changes the city was going through.

Pine trees at Camp John Hay. Photo taken while on a Tree Top Adventure in 2014.

Fresh from our tour of the Northern Blossom Flower Farm in Atok, Benguet two weeks ago, we swung by Baguio for an overnight stay. After leaving this mountain city in 2004, we’ve never spent more than 2 nights when re-visiting the place. This occasion wasn’t any different. 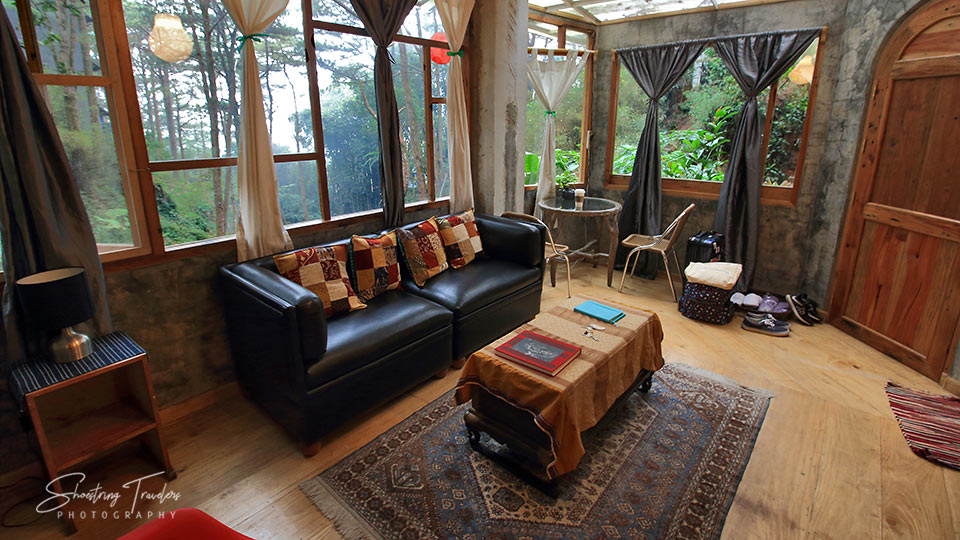 Our place for the night with a nice view of a pine forest outside.

Our home for the night was Two Trees – a splendid 2-bedroom guesthouse beside the abode of owners Kidlat and Lissa de Guia. (Kidlat is the son of National Artist Eric Oteyza de Guia, better known as Kidlat Tahimik.) We’re here only for a night but our cozy quarters near a small forest of pine trees and our host’s warm welcome had us wishing we had stayed longer. 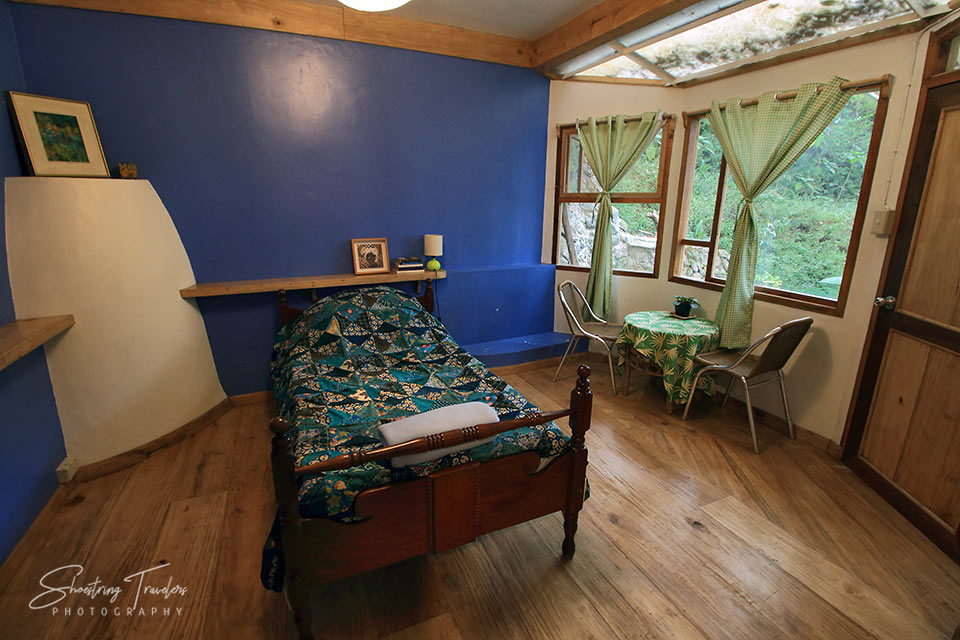 February is a colorful season in Baguio, the occasion for the Panagbenga Festival, a month-long festivity held as a tribute to the city’s flowers and as a way to help the city recover from the deadly 1990 earthquake. Beginning in 1996 the Panagbenga Festival has attracted hordes of tourists to the highland city eventually resulting in fully booked hotels and traffic snarls in recent times – something you would not normally expect for a small city outside Metro Manila. 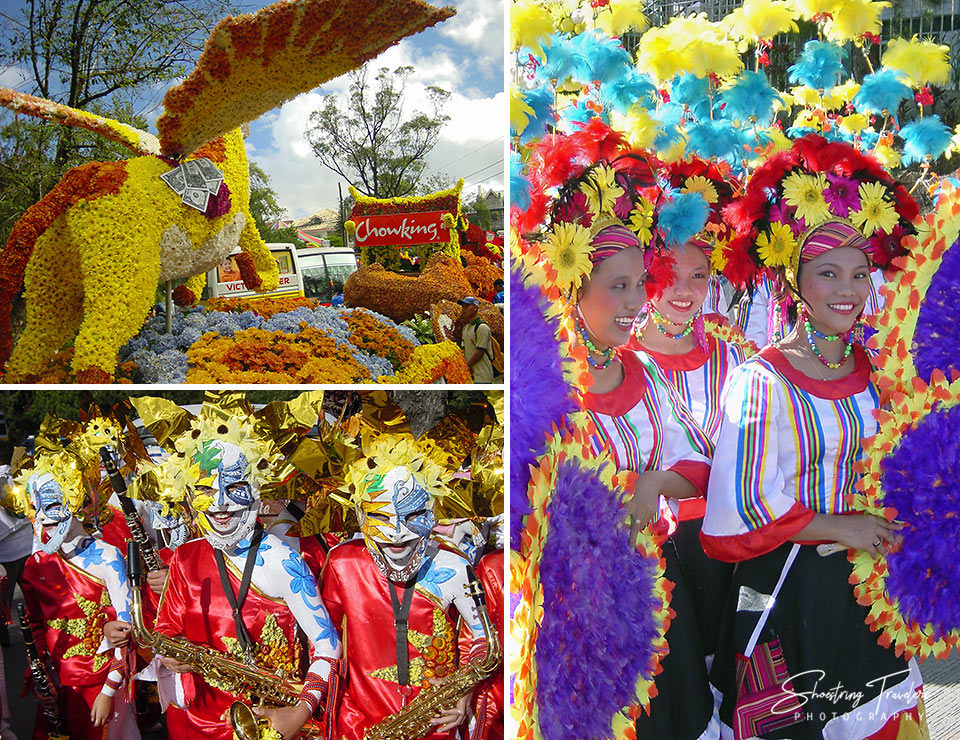 Flower-decorated floats and street dancers in colorful garb at a Panagbenga Festival celebration way back in the early 2000s.

We were therefore expecting traffic jams close to the city center but to our surprise traffic wasn’t that congested and the masses of tourists conspicuously absent. Turns out that the city government decided to cancel many events for Panagbenga including the float parade and street dancing as safety precautions against the COVID-19 virus.

As part of our reminiscing tour we drove to one of our preferred dining destinations in Baguio – the Café by the Ruins. Alas, even with tourism arrivals lower than usual, the café parking was full. We motored around for a while in search of a restaurant with parking space and decided to head up to one of the restos at the Commissary inside Camp John Hay.

Craving for coffee and hot choco drinks with local dessert, we drove to Chocolate de Batirol but had to turn back yet again as the place was just filled to the brim with cars and customers. No choice but to head up to a Starbucks branch still inside Camp John Hay.

Truth to be told, however, Baguio is studded with various dining destinations so you won’t run out of options. From our guesthouse which is located at a considerable distance from the city center we got to dine at a nearby restaurant that served authentic Malaysian and Indonesian cuisine – the Chef’s Home along the Palispis (formerly Marcos) Highway.

Burnham Park including flower exhibits for the Panagbenga Festival

For shopping we headed to the public market downtown for the usual pasalubongs of native handicrafts, peanut brittle and Benguet barako coffee. Parking wasn’t much of a problem as we were able to find one right away inside Burnham Park, a Baguio landmark and historic urban park designed by American architect and Baguio City planner Daniel Burnham. Because of Panagbenga there were flower exhibits at the park, although the displays were somewhat more subdued than usual due to the COVID-19 precautions.

As in our previous visits we drove to our old home at Greenwater Village. Sadly the two-story house that we used to rent looked abandoned; a government agency was now renting the big house nearby. Several commercial establishments had also set up shop in the area but we still got to visit our favorite Korean resto at nearby Military Cutoff Road – the Wood Nymph. To our delight the dishes were still as good as when we first visited almost 20 years ago. Despite a lot of transformation over the years there are still a number of things in the city that are best left untouched.

Our old office building is now a school

From our former home at Greenwater, our old office at Paterno Street in South Drive was just a short ride away. Twenty years ago, there were many occasions when we would simply walk to work while admiring the pine trees and vantage views of the city from the road. This time, as we drove up to Paterno Street, we could see our old office building still intact, but now home to the Princeton United School Baguio. 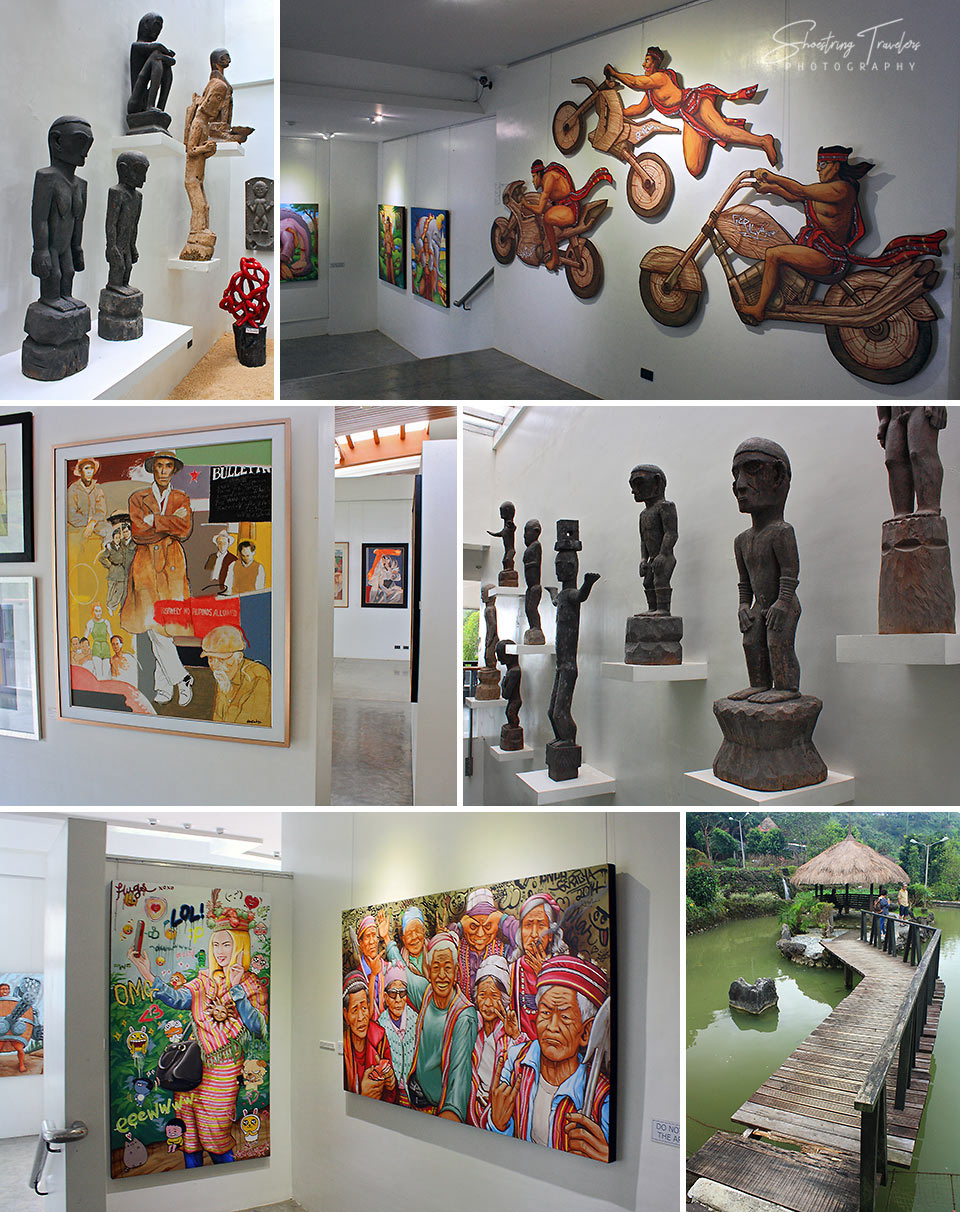 At the BenCab Museum in Tuba

Baguio has become a sanctuary for artists. Its natural environment and rich cultural heritage are triggers for creativity and consequently prominent artists have moved to the city including National Artist Benedicto (Ben) Cabrera. The BenCab Museum (actually located in the nearby town of Tuba) houses the works of Ben Cabrera and other notable Philippine artists as well as Cordillera crafts and artifacts. 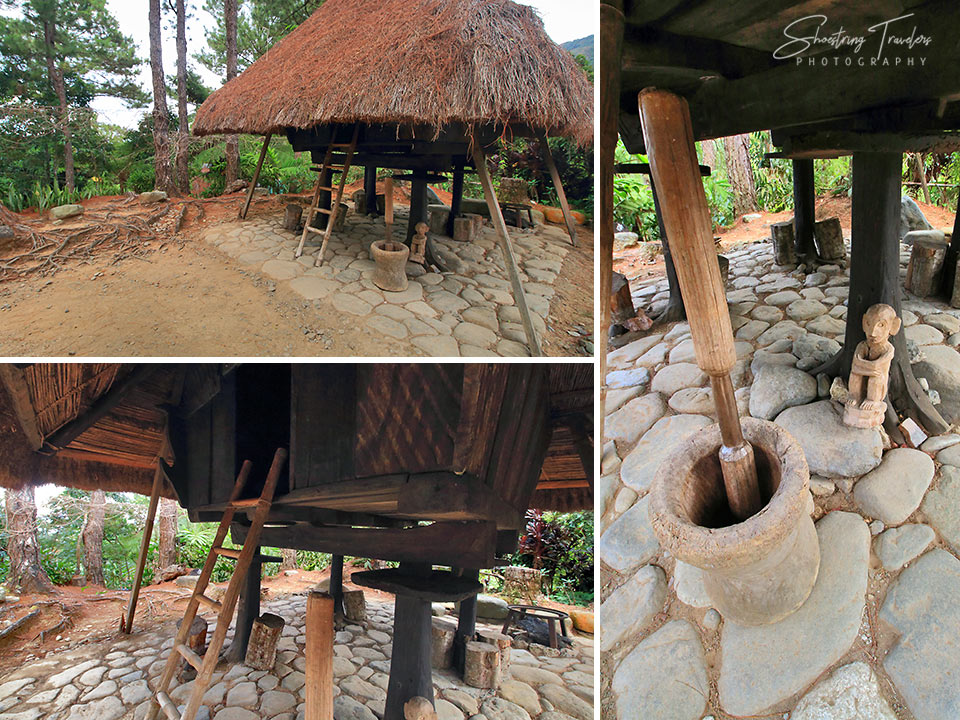 One of the huts at Winaca Eco Cultural Village in Tublay

Tam-awan Village off Tacay Road is another haven for artists and includes an art gallery, Ifugao and Kalinga native huts and a coffee shop. Exhibits by local artists are held at some of the galleries here. We had just arrived in Baguio in 1998 when it opened and had visited it a number of times. On this trip, however, a friend suggested we drop by Winaca Eco Cultural Village in the nearby town of Tublay on our way back to Baguio from Atok.

Exterior and interior of the Bakun-Benguet native hut at Winaca

Winaca is a 42-hectare property that features a nature trail as well as a zipline and obstacle courses for group and team-building activities. But what attracted us here is a small collection of native huts from Bontoc, Sagada and Ifugao, similar in some respects to Tam-awan. They also have a café/restaurant that serves really splendid coffee,

We’ll probably continue to visit Baguio and its surrounding towns if only to enjoy its cool climate. Recently there is talk about rehabbing the city as increased urbanization and tourism takes its toll but there are still plenty of pockets where people can enjoy its beautiful natural surroundings. (The rehab is focused primarily on overhauling the city’s sewerage system and massive regreening.) We’ve moved around in life quite a bit, having lived in almost 10 different locations in our lifetime but this city will always have a special place in our hearts.

4 thoughts on “The City of Pines: A Place We Used to Call Home”