Here we are at home entering the third week of an enhanced quarantine/lockdown that was extended to include the whole island of Luzon here in the Philippines and with no clear end in sight. We were supposed to be at El Nido, Palawan for island hopping at Linapacan and the Bacuit Archipelago this past weekend. But it’s best to stay home for now, not just for ourselves but for others’ safety as well. 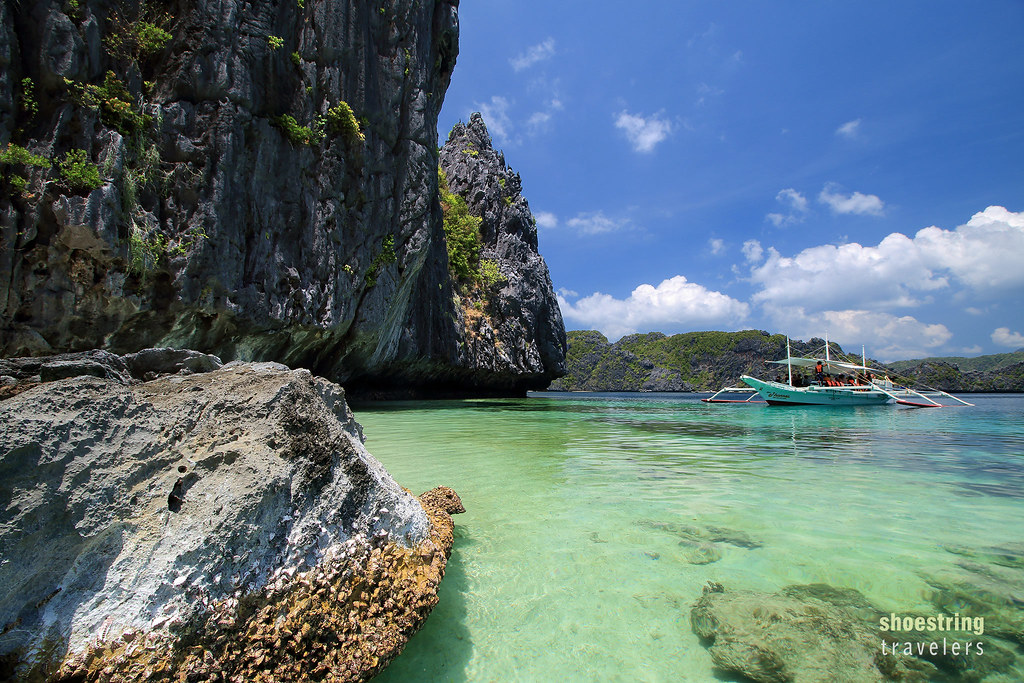 Since we missed going to El Nido and Linapacan last week we thought it would be a good time to rekindle memories of a previous trip we’ve had 4 years ago while looking ahead to places we plan to visit. Here we go… 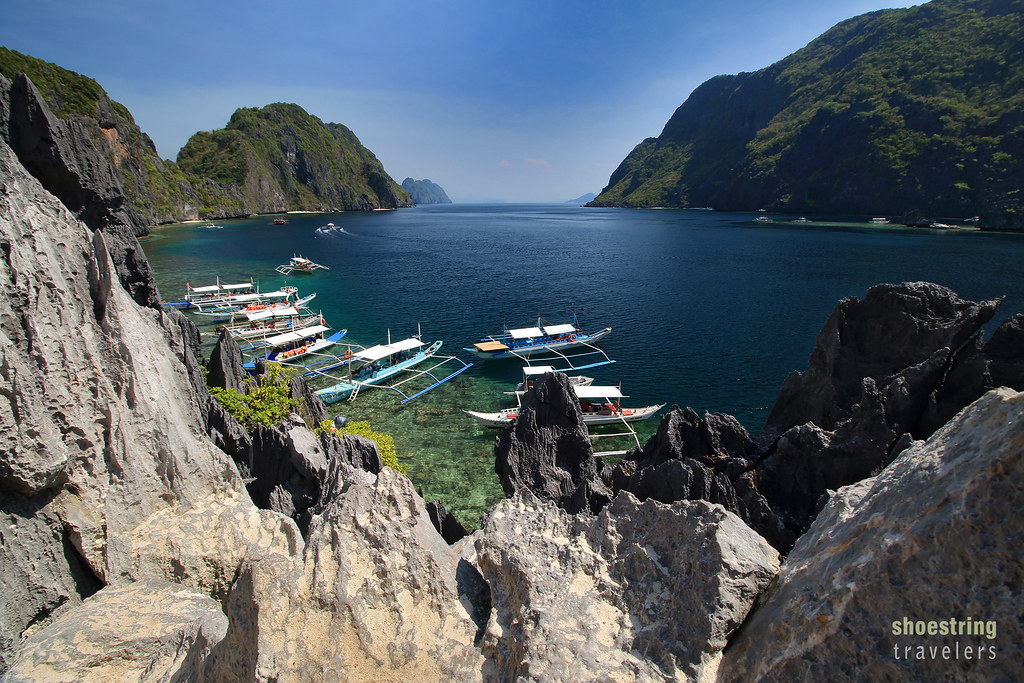 The top tourist draws in El Nido are actually located off the town, and comprise the islands at Bacuit Bay. Organized tours have grouped these island destinations into 4 – namely those of Tours A, B, C and D. Boats to these islands can be booked at El Nido town and often through the resorts that package them with accommodations and breakfast.

Tours A and C are the more popular among the 4 and we ended up selecting Tour C for our first day of island-hopping. Tour C is reputed to have the best snorkeling and it sure did not disappoint in this aspect. First on the itinerary was Dilumacad Island, more popularly known as Helicopter Island probably for its resemblance to the Chinook helicopter. Helicopter Island boasts of excellent dive and snorkeling sites not too far from shore.

Lunch and more snorkeling was at Talisay Beach on Tapiutan Island, the most westerly of the Bacuit Bay tour islands. Varying shades of emerald and turquoises waters off the white sand Talisay Beach reveal a coral reef just offshore. This reef is home to an assortment of colorful fishes including different varieties of clown fish and rare trigger fish. (Normally Star Beach, also at Tapiutan Island is included in Tour C instead of Talisay Beach.)

Not too far from Tapiutan Island is Matinloc Island with its abandoned religious shrine and a view point with panoramic views of Tapiutan Island and the rest of Matinloc. The island is also the site of Secret Beach, reachable by swimming though a hole among a line of towering karst cliffs. Once you make it through this opening you’ll be astounded by the sight of a shallow, crystal-clear lagoon framed by a white sand beach and towering karst walls. Hidden Beach, another remarkable destination at Matinloc, was also accessible only by swimming and walking since low tide made it impossible for our boat to negotiate a narrow passageway between huge karst formations.

Tour A is the most popular of the four and includes a visit to two islands – Miniloc and Shimizu – and its lagoons, beaches and snorkeling spots. Miniloc’s Big Lagoon is the star of this Tour with its stunning turquoise and deep blue waters and towering karst cliffs. Photos of the Big Lagoon have often been used as El Nido’s poster boy.

The Small Lagoon, also at Miniloc, used to be part of this Tour but was transferred to Tour D recently. This lagoon is only accessible by kayak; once inside you’ll be enthralled by the sight of the surrounding limestone walls and emerald-green waters. Miniloc also has the Secret Lagoon which could only be accessed by docking at a white sand beach, walking inland and finally squeezing through a narrow opening amidst karst formations.

Shimizu Island, named after a Japanese diver who lost his life while exploring an underwater tunnel here, was our lunch stopover. It’s a perfect spot for beach bumming and chilling with its white sand beaches and limestone rocks of different shapes. There are also excellent snorkeling spots. The last leg for Tour A took us to Seven Commandos Beach on the El Nido mainland.

Tours B and D

Visitors usually book these tours once they’ve gone through the “must-sees” of Tours A and C. We had planned to go on these tours this past week but will have to wait for now and just dream about them. Tour B has perhaps the most varied landscape of any tour and includes Vigan or Snake Island, so named for its stunningly long sandbar that slithers its way through open sea. Also included is iconic Pinagbuyutan Island with its towering karst formations and pristine white sand beach, a pair of caves (Cathedral Cave and Cudugnon Cave) and Entalula Beach on the Palawan mainland.

Tour D is a beach bummer’s dream tour since it includes Ipil Beach on the mainland and a trio of stunning beaches on or just off Cadlao Island: Paradise Beach, Pasandigan Cove, and Bukal Island and Beach. Also included is the remarkable turquoise-hued Cadlao Lagoon and nearby Nat Nat Beach. The crystal-clear waters off Cadlao also make for some excellent snorkeling. Recently, Small Lagoon, which used to be part of Tour A, was moved to Tour D which would make this particular tour the most underrated of the lot.

The beaches at El Nido town proper are not as good as they perhaps were 30 years ago but there are several beaches outside town and within the Palawan main (is)land that are worth visiting.

Ipil Beach and Seven Commandos Beach, both part of the aforementioned tour packages, are actually within the El Nido mainland although only accessible by boat. Corong-Corong Beach, located just outside El Nido town proper but along the main road may not be as stunning as these and other beaches elsewhere but the sunset views from the resorts lining this beach make for a worthwhile stay or visit.

The sunset views at Marimegmeg Beach, lying just south of Corong-Corong, are just as stunning. However, this white sand beach with its coconut palms and view of nearby Pinagbuyutan Island, has a wider beachfront than Corong-Corong.

More beaches beyond El Nido town proper are opening up such as Lio Beach just to the north of town and the rustic beaches of Duli, Mariposa and Dagmay a little farther up north. But easily the most stunning beach outside town seems to be the Twin Beaches of Nacpan and Calitang, also located north of El Nido proper. The longer of the Twin Beaches, Nacpan is a 4-kilometer curving swath of fine, creamy white sand. You can get an impressive view of both beaches from a low hill at the end of Calitang Beach.

These group of islands are outside El Nido’s jurisdiction but may be accessed via some barangays in El Nido. A few years ago these islands topped an unofficial list dubbed “Clearest Waters in the World to See Before You Die.” The South Linapacan Islands group may be accessed via Sibaltan on El Nido’s eastern coast. We had actually booked accommodations at Sibaltan coupled with a boat tour to the South Linapacan Islands before the lockdown in Metro Manila went into effect.

The West Linapacan Islands may be accessed through San Fernando port at Dipnay, the barangay several kilometers north of Sibaltan. A more suitable base to tour Linapacan’s 52 islands will have to be the main village or barangay of San Miguel on the island of Linapacan. Boat trips from either El Nido proper or Coron to the north can take visitors to San Miguel.