As the ferry slowly glided into a channel towards our destination, primeval towers of limestone rising out of aquamarine and turquoise waters greeted our eyes that cold June morning. It was our first visit to Coron in northern Palawan 18 years ago. 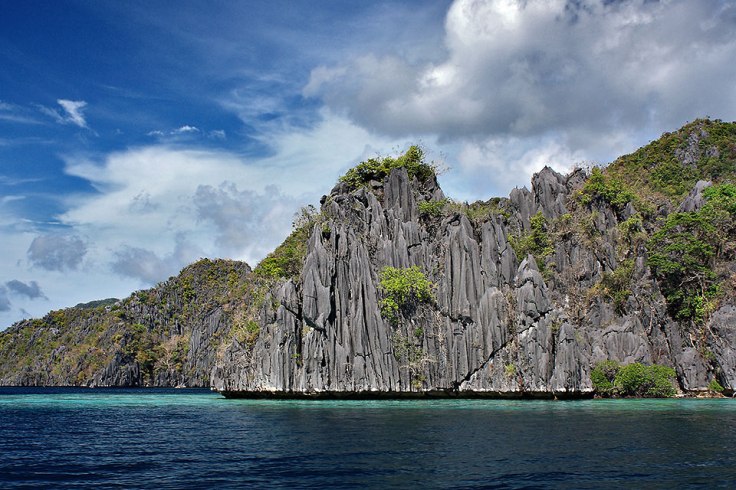 Soon we were talking to a Danish woman who rented her boat to us for a full day of island-hopping. She was complaining that business was bad, that visitors were so few and far between. We felt sorry for her and later a bit puzzled as we explored coves, hidden lagoons, inland lakes, white sandy beaches and coral reefs containing a wide diversity of marine life. Why visitors would shun such a beautiful place was beyond us.

Eleven years later we stumbled into a Coron that seemed worlds apart from the one we first visited. Now dozens of boats jostled for space at the pier with hundreds of eager passengers impatiently waiting to board a ride to the nearest island on the horizon. In Coron town where only a handful of resorts existed in 2002, a wide range of accommodations now competed for the flood of tourists that have descended into town even as new ones were being constructed. We couldn’t help but wonder if that Danish girl was still around.

Coron’s karst landscape, similar to that of El Nido, Caramoan and the Dinagat Islands, was the first thing that attracted us back in 2002. Many of them may be found in Coron Island, the island southeast of Busuanga Island where the airport and the major town of Coron is located.

Coron’s poster boy, however, is Kayangan Lake, accessible via an island-hopping tour – the Coron Island Loup Tour. Containing brackish water (a mixture of salt and fresh water), Kayangan Lake is a sight to behold with its crystalline waters offering up to ten meters visibility. We were the only visitors back here in 2002 but 11 years later more than a hundred visitors were swimming in the clear waters from a wooden walkway built at the lake’s edge.

A destination not offered on the Coron Island Loop tour package back then was Barracuda Lake – a lake similar to Kayangan and so named for a singular barracuda fish that was trapped in its waters. There are bigger lakes inland plus a few more coves in other parts of Coron Island that have yet to receive tourists but are considered as sacred places by the indigenous Tagbanua tribe and therefore closed to visitors.

Another interesting destination on the Coron Island Loup Tour is the Twin Lagoons, two bodies of water separated by a karst wall. Boats enter a narrow channel to get into the outer lagoon. The towering limestone walls will make you think that the lagoon ends here until your tour guide leads you through a hole in the karst walls and right into a second lagoon. This inner lagoon is quite deep and like Kayangan Lake’s its waters are also brackish – a combination of salt and fresh water.

One of the usual lunch stops of the Coron Island Loop Tour is Banol Beach which has one of the longer strips of white sand on the island. Familiar huge karst formations tower over the beach while kalachuchi or plumeria trees cast their intricate shadows on the sand below. Lunch is served inside the native huts built under the shade of trees. 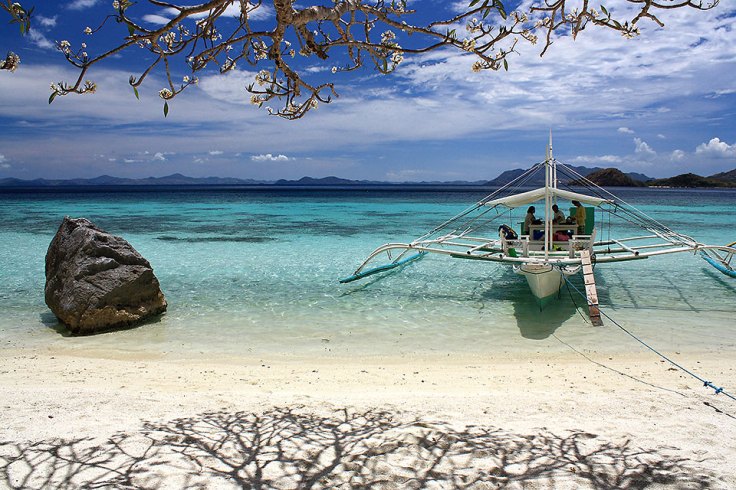 Underneath the bright aquamarine and turquoise waters off Banol Beach are equally colorful marine life that we soon discovered after our boat crew helped us snorkel several meters from shore. An even better snorkeling (and diving) destination is the Skeleton Wreck which we explored on our first visit here. The Skeleton Wreck was a Japanese freighter sunk by US Navy attack planes in World War 2 and eventually overgrown by corals, attracting a wide variety of other marine life.

Besides Banol Beach other beaches on the island used as lunch stopovers include Smith’s Point, Atwayan Beach and Kalachuchi Beach. After lunch at Banol on our second Coron visit we were taken to the Coron Youth Club or CYC Beach, which lies on an islet just off Uson Island, an island northwest of Coron Island. CYC is a public beach and back then didn’t charge an environmental fee unlike Banol and the other destinations on Coron Island.

During both visits to Coron we were taken to coral reefs for snorkeling. The first was to Siete Pecados with its schools of reef fishes and other marine creatures including brightly colored fluorescent corals at shallow depths. (It was our best snorkeling experience for years.) On our second visit we were taken to the Twin Peaks Reef which was just as excellent with its variety of colorful reef fishes and corals.

A respite from all that island-hopping at the end of the day is soothing Maquinit Hot Springs. Just a 20-minute trike ride from the center of Coron town and adjacent to a mangrove forest by the sea, this hot springs provided a welcome relief from a tiring day of exploration on our first Coron tour.

18 years ago the Coron Island Loup Tour was practically the only boat tour offered to visitors. A lot has changed since then as more of the Calamian Islands (the archipelago that includes Busuanga and Coron Islands) have opened up to tourism. Recently island tours classified as Tours A-D offer various combinations of the destinations listed here. You can also book your own private tour to any island you choose. On our second visit to Coron in 2002, we went on an organized tour of 3 islands in Coron Bay southwest of Coron Island.

The first of these islands was Bulog Dos with its sandbar. The sandbar snakes its way towards the Two Seasons Resort on the Malaroyroy Peninsula in Bulalacao Island. From a hilltop at Bulog Dos we had an excellent panoramic view of the sandbar and the surrounding waters of Coron Bay. It was quite a sight, with coral-rich waters of aquamarine, turquoise and deep blue blending together with white sand.

Just 10 minutes away by boat is Banana Island, more formally known as Dicalabuan Island. This island has facilities for overnight stay and has a number of huts and tables where we had lunch. A coral reef lies just off the beach and is said to be an excellent snorkeling area. We chose instead to explore the island, particularly the area where a sandbar juts out in the direction of Bulog Dos and the Malaroyroy Peninsula.

Malcapuya Island is the last and probably the most beautiful of the 3 islands on this island-hopping tour. It’s privately owned and up for development by a company that has resorts in Boracay and Panglao Island in Bohol. During the time we got there it was still undeveloped and open to visitors.

The palm-lined white sand beach on Malcapuya’s southwestern side has been touted by many as the best beach in Coron. It’s hard to disagree after seeing the crystal-clear waters of varying shades of aquamarine, turquoise and emerald combine with the white sand for an immaculate scenery. The beach is shallow for some meters out to sea making for good swimming but what we really enjoyed was snorkeling at a coral reef farther out. This turned out to be a sanctuary for colorful marine life that included giant clams and clown fish.

There’s actually so much more to explore in Coron beyond what we saw and mentioned here that making a return to that place not a distant possibility. If it’s more snorkeling and diving you’re after, head to the Coral Garden and to the Lusong Gunboat, another WW2 wreck with its stunning marine life.

Busuanga, Coron and Culion Islands are part of the Calamianes group which includes literally hundreds of islands and islets. There are several beautiful and uninhabited smaller islands to the west of Coron town including South Cay, North Cay (Pagenga Island), Black Island (Malajon Island), Dibutonay Island, Ditaytayan Island, Maltatayoc Island and the Sunset Lagoon to name a few. These islands feature secluded white sand beaches, gorgeous sandbars, majestic reefs and even hidden caves. However, since they are farther away from Coron town where most accommodations are located, you’ll need to shell out extra cash to get to them. Conversely, these places are more pristine and have a more Robinson Crusoe-feel than the now more commercialized islands closer to Coron town.

Lastly one may also opt for the Caluit Island Tour which includes island hopping to destinations such as Black Island. The Calauit tour’s main focus, however, is a visit to this island and its transplanted African safari including giraffes and zebras (the impalas, Waterbucks and gazelles have died out) which co-exist with local wildlife. No big cats and other large predators here, though.

Some people have asked which is better, Coron and its attractions or El Nido and the islands of the Bacuit Archipelago. While both places share many things in common as far as topography is concerned, each has its own unique highlights making it really difficult to judge between the two. Coron has an advantage in that it is home to a larger number of islands but El Nido is closer to the Linapacan group of islands, another stunning destination. For those who can’t decide you would do well to visit both. 🙂