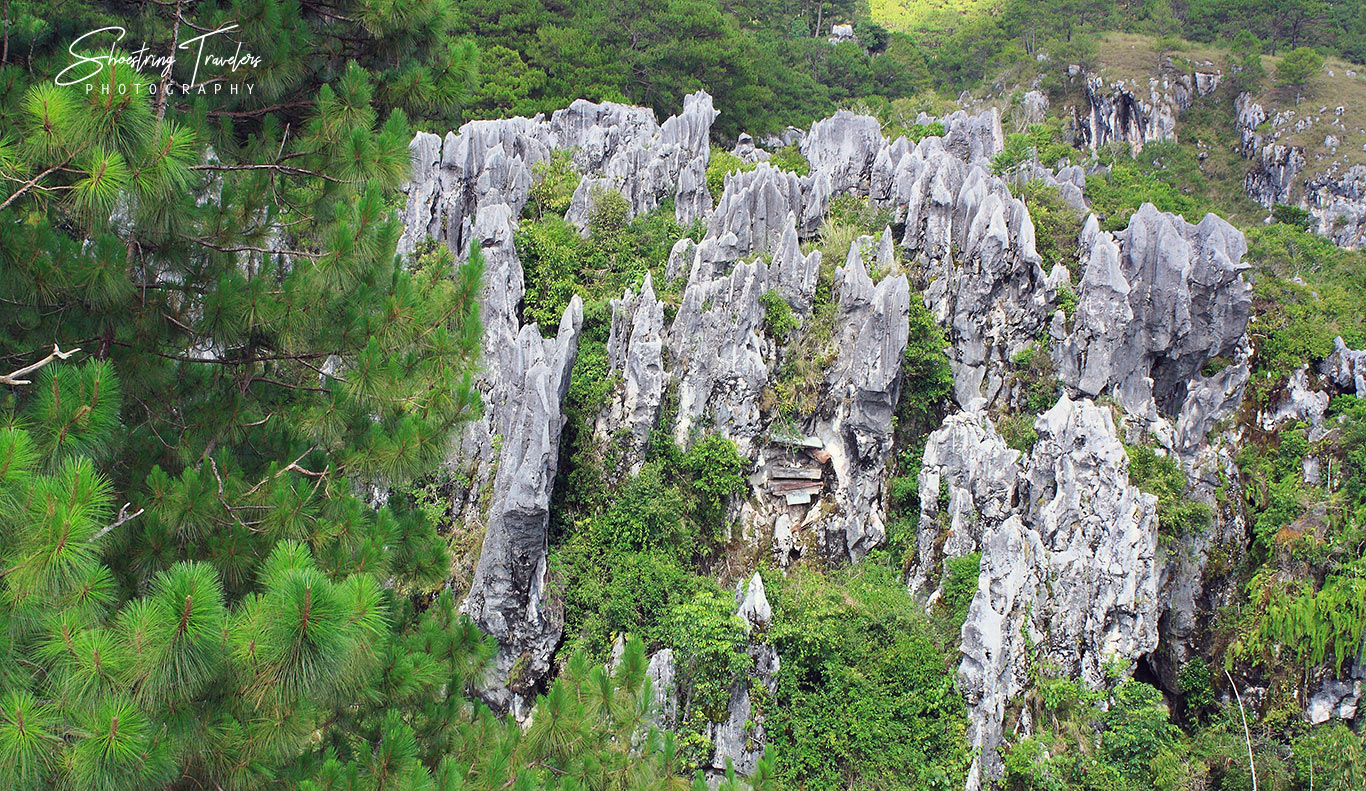 Burial grounds rarely make for tourist destinations in the Philippines but in one of the highland towns of the Cordillera Region, a burial tradition of the indigenous population has made it a major attraction. But wait, there’s more: majestic mountain scenery, limestone caves with stunning underground rock formations, golden rice terraces, pristine waterfalls and towering karst cliffs on pine-covered hills. Welcome to Sagada and its unique and intriguing hanging coffins.

This burial tradition of Sagada’s native Igorots, however, wasn’t our primary reason for visiting eight years back. People had been saying that the quaint mountain town was how Baguio looked like 50 years ago with its laid-back vibes, refreshing pine scent and stunning natural and man-made attractions so we decided to take a look. Sagada’s hanging coffins would only make an impression on us once we actually hit the town.

The beautiful scenery starts even well before we entered Sagada as the roads to the town – both the Halsema Highway from Benguet or the road from Banaue in Ifugao province – feature spectacular mountain scenery of pine forests, streams gushing down hillsides, gorgeous rice terraces and the surging Chico River on the valley floor.

Simply staying in Sagada town proper to enjoy its cool mountain air and leisurely pace while feasting in various dining establishments makes the long trip to the town worth it. The scenery around the town proper makes for a pleasant strolling although, as a tour guide told us, there are no level paths in Sagada and you are either going uphill or downhill most of the time.

The way to some scenic locations are not so conspicuous such as the pathway to Datil, where we passed by the backyards of local houses on the way. But after a few minutes the scenery just opens up and you are treated to a pleasant view of rice and vegetable fields back dropped by pine-blanketed hills. We also tried to hike the Bokong Falls on our own but failed to find it after a trek through rice fields about 1.5 km. from town. (Back then visitors usually hire guides for this hike.)

However there are just too many attractions beyond the town proper to pass up. Numerous karst formations forming part of the hills just outside town are a common sight and have been used as locations for the hanging coffins. The locals have been practicing this kind of burial for about 2,000 years although not as widespread as in recent times. Not everyone are qualified to be buried this way; among other things, one needs to have been married and to have grandchildren.

One group of these hanging coffins – the Sugong Hanging Coffins – are visible from a view deck along the Suyo Road on the way to Sumaguing Cave south of the town proper. Another group of hanging coffins may be found in Echo Valley. Viewing the latter requires a hike that passes by St. Mary’s Episcopalian Church and through a public cemetery on a hillside. The final part of the hike passes through a narrow path over a steep cliff. The last burial using a hanging coffin in Echo Valley was done in 2010.

An alternative to the hanging coffin method of burial is a burial in a cave. The Lumiang Burial Cave, just 20-30 minutes walking distance south of the town proper, is home to hundreds of symbolically-marked coffins stacked at the cave entrance. Some of these coffins are said to be 500 years old. A short trek from the main road that passes through a spectacular scenery of karst formations intermingled with clusters of pine trees on the hillsides is needed to get there. Many of the coffins (the older ones) seem unusually short but we learned that this was because the bodies were traditionally placed in a fetal position. Newer coffins have the bodies laid out in the more conventional way and are therefore longer.

Half a kilometer to the south of Lumiang Cave is Sumaguing Cave. This cave may be reached via a steep and sometimes – depending on the weather conditions – slippery descent from the main Suyo Road. Guides are required for touring the cave and appropriate attire is a must since one can get wet and muddy while navigating the cave’s subterranean chambers. Inside the cave are several interesting rock formations. A typical tour takes two hours but unfortunately our group decided to back off upon realizing the paths inside the cave are slippery in some sections; we only got to explore the front end of it as a result. For adventurers there is a 4-hour cave connection trek where spelunkers can descend Lumiang Cave and exit through Sumaguing Cave.

Like the rest of the Cordillera Region, Sagada has its share of rice terraces. These may not be as spectacular as the ones in Batad and Bangaan in Banaue but are still stunning especially when viewed just before the rice harvest. Among the ones we saw are the Kapay-aw rice terraces which are easily visible along the Suyo Road on our way to Sumaguing Cave. There are also rice terraces in Bangaan on the way to the Bomod-ok Falls, in Fidelisan and Kiltepan.

There are two major waterfalls in Sagada: the Bomod-ok and Pongas Falls. The hike to Bomod-ok, the shorter of the two treks, is about 2 hours long one-way and passes through the rice terraces of Bangaan (not to be confused with the Bangaan terraces in Banaue).

An attraction that has gained fame in the past 5 years due to having been featured in the local movie That Thing Called Tadhana is Kiltepan Peak. From Kiltepan one can get majestic views of the sun rising over a cloud-shrouded valley of pine trees and rice terraces. At one point the number of tourists so swamped the town and Kiltepan that the locals were forced to limit the number of visitors. Getting to Kiltepan, however, turned out to be a disappointment for us during our time in Sagada when the local guides/van drivers we contacted to bring us there failed to show up very early in the morning. On two occasions.

To sooth our disappointment we made for Lake Danum, on the way to Besao (the next town after Sagada). This lake might not be as picturesque as Sagada’s other attractions but is a good place for picnics. We arrived there in the afternoon when the place was shrouded in fog and which gave it a mystical aura. Going back to town we got to pass by Sagada Pottery with its displays of local artifacts and pottery makers at work.

An alternative to the sunrise view at Kiltepan is the sunrise at Marlboro Hills with almost the same scenery of sunlight breaking out over a sea of clouds. Getting to be popular are the Blue Soil Hills, reachable via a trek from Marlboro Hills. Once you get there be prepared to get amazed at the blue-colored soil. The bluish-green soil – to put it more accurately – is the result of the soil’s high copper sulfate content. This is one attraction that was a secret back during our only travel to Sagada.

Sagada used to be a backpacker’s haven and in many ways it still is. Nowadays there is a wider range of accommodations to choose from but majority remain in the relatively inexpensive range. It’s the same for dining; food is reasonably priced in most places. Perfect for these shoestring travelers. One characteristic of the restaurants here that we loved so much was the unlimited servings of veges. Something we can look forward to on another visit to Sagada if that feature still exists. And because we missed a number of the natural attractions here during our first visit, a second one is not a distinct possibility.