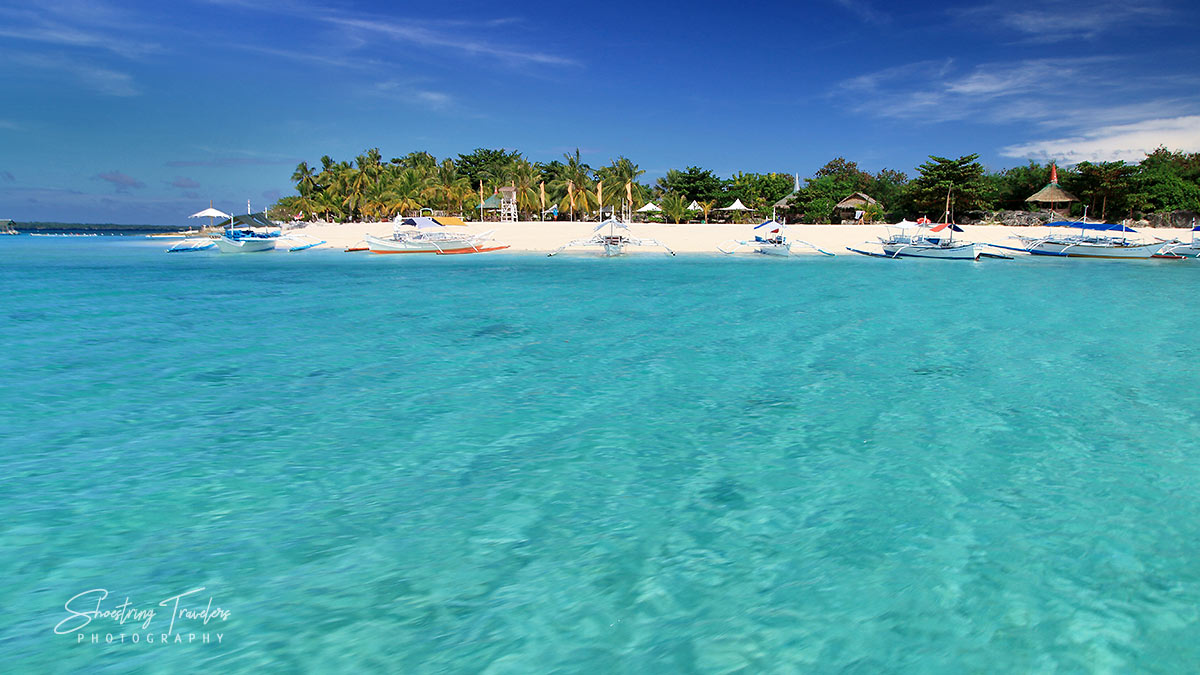 With 7,641 islands, the Philippines has plentiful sandy beaches, coves and seaside lagoons. Visiting over 50 provinces of the country has allowed us to relish a good number of these beaches but still left out a considerable number in our bucket list. Compiling lists of this sort almost certainly leaves out quite a number of other outstanding examples but we chose to confine ourselves to the beaches we’ve personally visited. And we certainly have biases of our own. Nevertheless…

1 – The beaches of Matnog, Sorsogon. We were amazed by the aquamarine colors of the water at Matnog’s Subic Beaches (Subic Liit and Subic Laki – bottom picture) at Calintaan Island and the beach at Tikling Island (top picture), But what really sets both of these beaches apart from others is their pinkish white sand formed by crushed red pieces of corals mixed in with white sand particles.

2 – Bonbon Beach, Romblon. Located in Romblon town, Romblon Island, Romblon province, this beach has some of the most beautiful waters we’ve seen. Arrayed in different hues of blue, the waters complement an immaculate white sand beach that tapers into a long, curving sandbar. Romblon has several beautiful white sand beaches that were just becoming popular when we visited 3 years ago. But even more beautiful is the beach and sandbar at Cresta de Gallo in Sibuyan Island of the same province that we are hoping to visit in the near future.

3 – Bitaog Beach is said to be the most beautiful of the beaches in Dinagat province in Mindanao. Arriving there late in the afternoon, we were somewhat disappointed in not being able to get a good shot of the main white sand beach which was shaded by the massive karst formations behind it. But the superbly clear waters and many rock formations more than made up for it.

4 – Nacpan Beach in El Nido is actually one of the Twin Beaches there (top photo), the other being Calitang Beach. It is the bigger of the two. El Nido has so many excellent white sand beaches in the islands of the Bacuit Archipelago but we chose Nacpan which is located on the Palawan mainland because of its 4 kilometer stretch of fine, creamy white sand and crystal-clear turquoise waters. It only became popular some 5 years ago but has since attracted several visitors.

5 – Bantayan Island in Cebu has several excellent beaches but our favorite is Paradise Beach which is somewhat off the beaten path among the beaches in Santa Fe town and therefore lacks the development that characterizes the beaches there.

6 – We almost passed up world-famous Boracay and its White Beach because we felt this island has reached that stage of being overdeveloped. But the island’s talcum powder-like white sand and shallow turquoise waters are just too good to ignore.

7. The beach at Cabugao Gamay Island. This island is the poster boy of the Gigantes group of islands in Carles, Iloilo primarily for its stunning topography, white sandy beach and turquoise waters. You can climb up a hill on the island’s northern tip to get a good view of this (see top photo).

8. Porta Vega Beach, Dimasalang, Masbate. Another relatively unknown beach in a province with a lot of tourism potential, Porta Vega Beach features a collection of dwarf coconut palms. There was just one other group on this beach when we arrived so we had this small paradise almost all to ourselves.

9. Inaladelan Island Beach, Port Barton, San Vicente, Palawan. Port Barton has an array of pristine beaches, mostly located in the islands offshore but after touring many of them we find the beach at Inaladelan Island, sometimes called German Island by the locals, as the best of the lot.

10. Paliton Beach, San Juan, Siquijor. The first time we visited this beach in 2013, it was practically deserted. Six years later we returned and as expected, there were more than a few visitors even at an early morning hour. There were a good number of food stalls as well, an indication that Paliton Beach is no longer the off-beaten destination it once was 10 years ago.

11. Malcapuya Island Beach, Coron, Palawan. It was a rough 2-hour boat ride from the port of Coron town proper but Malcapuya Island was worth the hassle with its immaculate white sand and crystal-clear turquoise waters. The snorkeling just several meters away from shore was also very good. It was here that we first encountered several clown fish.

12. Sabitang Laya, Bagieng Island, Caramoan, Camarines Sur. It was hard to choose our favorite beach in the Caramoan Peninsula and its offshore islands but we eventually chose Sabitang Laya on triangle-shaped Bagieng Island. Long white sand beaches line two of Bagieng’s 3 sides, with a cluster of tall karst rocks at its apex.

13. Mahaba Island beach, Cuatro Islas, Inopacan, Leyte. Seven years ago the Cuatro Islas in Inopacan and Hindang, Leyte, were still relatively unknown. So it wasn’t a surprise that we were practically the only visitors to the beaches on these islands. We stayed longest at the beach on Mahaba Island with its pristine white sand and crystalline waters. We later discovered that a little further inland in a small lagoon lived a rare species of red shrimp.

14. Maniwaya Island’s beaches, Sta. Cruz, Marinduque. Marinduque province has been popular for ages for its Moriones festival during the Lenten season but it has so much more to offer to visitors. On a visit to the beaches of Maniwaya Island off Sta. Cruz, we encountered some of the clearest waters we’ve come across in living memory.

15. Secret Beach, Matinloc Island, El Nido. Is it so secret that we can’t show its pictures here? Actually a part of El Nido’s Tour C package, Secret Beach could only be accessed through a tiny opening in the tall limestone cliffs surrounding a lagoon at Matinloc Island. We had to swim underwater to reach it but once inside we were confronted by a shallow, warm-water lagoon at the end of which lies a stretch of charming white sand beach among huge limestone outcrops. The scene was both stunning and eerily primordial, only we couldn’t bring the camera with us to show you photos of this beach.

Doubtless there are other beaches in the country that should belong here but are still waiting in our bucket list. We already mentioned the beach and sandbar at Cresta de Gallo in Sibuyan Island, Romblon. Another is the Pink Beach in Sila Island, San Vicente, Northern Samar. Then there is Mahabang Buhangin Beach in Calaguas Island which can easily compete for the best beach in the country and has only become popular in recent years. The beaches in the Balabac group of islands in the southernmost tip of Palawan and those of Linapacan between El Nido and Coron are among the most pristine in the country. Looking at photos of these islands makes you realize why these places are sometimes called the Last Frontier within the Last Frontier (Palawan). Inasakan Beach in Ilin Island, San Jose, Mindoro Occidental, is an unspoiled beach which we’ve been dying to visit. But probably one of the most unspoiled beaches is the one at Sibang Cove in Calayan Island, Cagayan province (one can also go humpback whale-watching at the same time in the waters off this island). These places are a bit difficult to reach but there are other beautiful beaches that are relatively easy to access. Tatlong Pulo Beach with its triple coves and 3 huge karst formations in Guimaras is one of these and is so pretty you wonder why it’s not as popular as the other beaches on the island province.

7 thoughts on “Our 15 Favorite Philippine Beaches”