We’re not exactly sure how it got its name but if the origin of its label is a mystery, the reason why it got included on this tour wasn’t a question for us. The last stop of Tour A before heading back to El Nido town, the Seven Commandos Beach looks attractive even from afar. The wide expanse of creamy-white sand beach, crystal-clear turquoise waters, impressively tall karst cliffs and the dense tropical jungle behind the beach are reasons enough for including this in Tour A.

Seven Commandos beach actually lies on the El Nido mainland, unlike the other tour destinations, all of which are islands in Bacuit Bay. The white sand beach is wide and clean, the waves calm, making it ideal for swimming and snorkeling. There are no entrance fees here and the huts on the beach are actually rent-free. There is a refreshments store here serving snacks and drinks, albeit on the pricey side.

There were quite a number of guests on Seven Commandos when we arrived. Beach combers were lazing away the last minutes of Tour A in the refreshing waters of the beach or tanning themselves on the sand. The wide white sand beach was just perfect for beach bummers not into swimming.

Despite the number of people on the beach this afternoon, Seven Commandos retained its charm. We were content to rest, relax and just enjoy the sights at this beach after a whole day of kayaking and swimming through small openings to see El Nido’s fabled lagoons. Soon we were hauling back into our boat and into the port at El Nido town as a low sun began casting its golden rays across our path.

Some development is slowly making its way into Seven Commandos. A four-room resort – Vellagio’s – opened early last year. Otherwise, the huts and refreshment store are the only structures on the beach. If this beach gets too crowded, visitors have the option of rounding the huge limestone rock at Seven Commando’s eastern end to anchor off the slightly smaller but just as beautiful Papaya Beach. 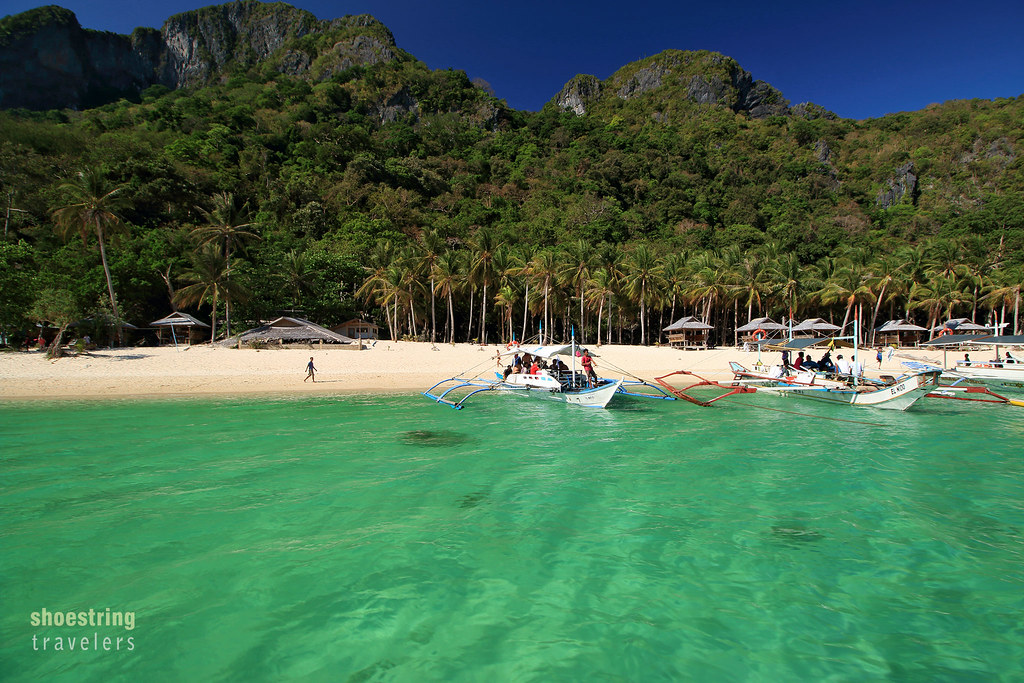 North of Seven Commandos are the two Ipil Ipil beaches reachable by kayak from the former. There are actually a few more nice white sand beaches this side of the El Nido mainland with names like Lapus-lapus and Yoga Beach but most are privately owned and accessible only by boat or kayak.