It wasn’t our original destination on this balmy December week. But after our trip to the Linapacan islands in northern Palawan didn’t push through we found ourselves chilling at this remote, peaceful coastal village of San Vicente town in Palawan. Port Barton may not yet be that popular with local tourists but foreign travelers have started to flock to this paradise of beautiful white sand beaches, crystal-clear waters and stunning coral reefs. 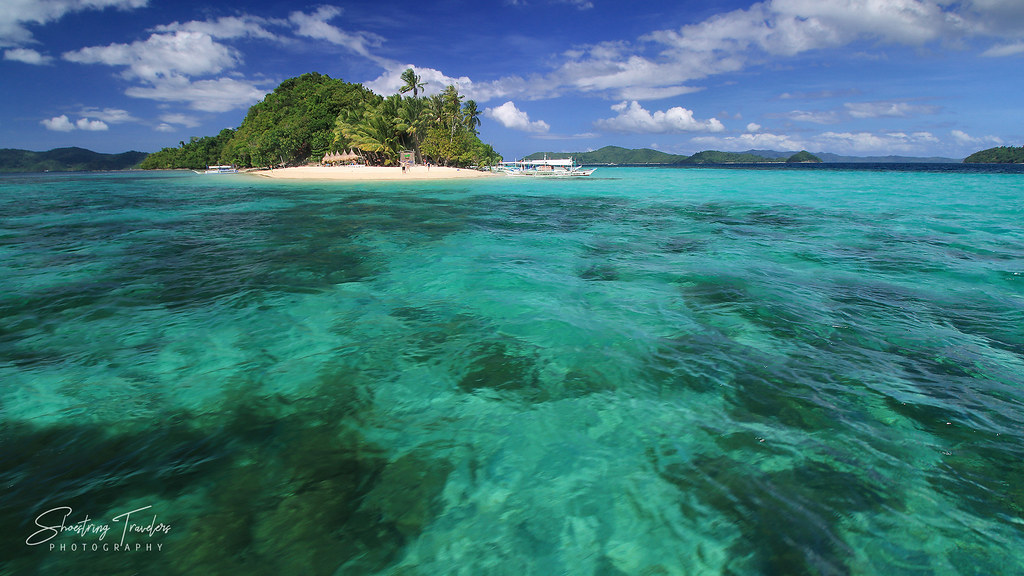 The road leading to Port Barton from the main Puerto Princesa North Road used to be a rough one but is now almost fully concreted, cutting down the travel time from Puerto Princesa airport to 3 hours by van. After our van ride we headed straight for the beach where our home for the next 3 nights and 3 days – Deep Moon Resort – is located.

A stroll along Itaytay Beach lets you observe several European travelers either lounging on the sand or in hammocks between verdant palms or taking a lazy swim off shore. You’ll hardly see any Pinoy tourists here. Elsewhere local villagers go about their business with boatmen offering island-hopping tours or bringing in their early-morning catch.

Sandbar at the northern end of Itaytay Beach

The village itself exudes a peaceful, laid-back atmosphere although the resorts and dining places have increased markedly within the past 2 years. There are, however, no big luxury resorts here and the place is largely uncommercialized. The roads in town are mostly unpaved, lending a laid-back, rural feel to the place. It’s probably one of the characteristics of Port Barton that draws in a lot of European visitors – a chance to experience relaxed rural living.

To experience Port Barton’s natural beauty, however, one needs to venture out of the village and into the islands and coral reefs at Port Barton Bay. There’s at least a dozen islands here with magnificent coral reefs off shore. Beautiful white sand beaches framed by stunningly clear turquoise waters mark most of these islands. The coral reefs are well-preserved and offer some of the most remarkable snorkeling we’ve ever had.

Boat tours to these islands and reefs are generally organized into Tours A to D and include a visit to Bigaho Waterfalls in the mainland. However, the itinerary in these tours vary from one tour/boat operator to the next; they’re also flexible and willing to change the itinerary at your request. Generally the islands offered on the tours are Inaladelan or German Island, Exotic Island (Cayoya Island in Google Maps), Maxima Island (actually a part of Albaguen Island), Paradise Island, Smart Island (a part of Maroday Island), Capsalay Island and Starfish Island or Sandbar. Some tours also offer the Secret Paradise Resort and Turtle Sanctuary and nearby coves and reefs on a peninsula west of Port Barton. Boatmen also offer rides to White Beach in the mainland but that beach can also be reached by walking (30 minutes) or via a motorbike ride. It’s also possible to take a boat or travel by land to Long Beach (the longest stretch of white sand beach in the Philippines – about 14 kilometers long) at San Vicente poblacion. Boat travel takes at least 1 hour.

What surprised us most about these tours, however, were our visits to the coral reefs in the bay. The islands offer excellent snorkeling opportunities but the reefs in the open waters of Port Barton Bay let us into some of the most stunning snorkeling we’ve ever had. These include Twin Reef, Aquarium Reef, Lagoon Reef, Fantastic Reef, Wide Reef, Reef #5 and Reef #1. There’s also the Turtle Spot – an area that lets you observe green turtles feeding underwater.

(We’ll feature more about these destinations in our next blog posts.)

What attracted us initially to Port Barton was the cheaper boat rates at P700-800 per person compared to P1,200 to P1,500 for the tours in Coron and El Nido. However, the day before we arrived, they increased this to P1,200. The main reason was the inclusion of entrance fees for the islands. Apparently, the islands are mostly privately-owned and whereas only German Island was collecting an entrance fee before (not included in the previous P700-800 rate), some islands have started to do so. Still we feel that the tour rates are worth the price. There’s also an environmental fee of P50 per person for these boat tours (good for 10 days apparently). Most tours start at 9 AM and end at 4 or 5 PM.

Resorts will arrange your tour with boat operators but you may also want to negotiate with the latter directly. The boat operator during our second island-hopping tour, Richard Tiu, was very helpful in snorkeling around the reefs and customizing our itinerary. You may get in touch with him through his Facebook account. You can also call him up at 0995-6993935 or 0965-2497914.

Two years ago there were just a few accommodations in Port Barton that were published or advertised online. These days the influx of mostly foreign tourists has seen that number go up with more being built. Most of these establishments are located along Itaytay Beach and many seem to be designed with foreign backpackers in mind. Most of the cottages and resorts are non-air conditioned – not a problem since the nights here are mostly cold during this month. There are more accommodations including homestays inland but not too far from the beach. Rooms and cottages are generally in the P500 to P2000 range which compares favorably with other rates in Palawan. We chose to go to Deep Moon Resort where a rustic cottage good for 3 goes for P1,000 to P1,200 (fan). Other popular resorts include Besaga Beachfront Cottages, Cassandra’s Cottages, El Busero Inn, Princesa Michaella Guesthouse, Ferranco Tourist Inn, El Dorado Sunset Resort, Ausan Cottages and Greenview Resort.

Inside our cottage at the Deep Moon Resort

Just like the accommodations in Port Barton, the dining establishments here have seen a dramatic increase in the past 2 years. Foreign travelers have also influenced the restaurants here and they are now offering vegan and vegetarian options – something that pleased these vegan travelers a lot. The resorts along the beach offer good food but if you’re looking for budget-friendly options there are several in town not too far from Itaytay Beach.

Gacayan Restaurant serves budget-friendly but tasty Filipino and foreign dishes and gets a lot of foreign tourists as well. We frequented this place as a result but there are also many other dining establishments that you just cannot ignore. Paella restaurant is another affordable but good dining place that serves Filipino and international fare. Ayette’s Bamboo Restaurant and Bungalows offers local and seafood dishes. Other restaurants specialize in specific cuisine including Jambalaya Cajun Café (Cajun cuisine obviously but also Thai curries), Reef Café for burgers, fries, fish and chips, the popular Gorgonzola for its brick-oven pizza and pasta dishes (many vegetarian options), the vegan/vegetarian-friendly Mabuti and Yoske for its Israeli and Middle Eastern fare.

Electricity in Port Barton is limited and runs only from 5PM to 12AM. Many of the resorts and dining places though have their own generators. There are no banks or ATMs in town so you will need to bring in all the cash you need.

How to Get There

The nearest airport to Port Barton is Puerto Princesa. From there you may take a trike to the San Jose terminal and get a bus or van bound for Port Barton. There are limited bus trips – probably only one per day – but there are multiple van trips per day. Bus fare is P250 and the travel time is 4 hours. Vans cost P350 and takes 3 hours to get there – although more daring drivers can get you there in 2.5 hours. It’s also possible to get a van at the airport that goes directly to Port Barton for P500. We were fortunate to get a van at the airport for P400 – but that was because he was picking up someone at Port Barton for the return trip to Puerto Princesa and dropped by the airport for a chance to pick up some passengers for extra income.

The best months to go to Port Barton are from December to May when it’s mostly sunny. (This explains why most of the tourists we encountered are from Europe and North America – they’re escaping winter in their place at this time of the year.)

Up next: Our visits to the islands and coral reefs at Port Barton Bay.