It used to be a laidback, sleepy town in a province better known for cattle-raising and sometimes referred to as the “Rodeo Capital of the Philippines.” But once word spread around about a group of six islets with pristine white-sand beaches and stunning rock formations lying just offshore, San Pascual in Burias Island, Masbate soon burst into the tourism scene. Although we’ve first read about this town and its island gems 5 years ago it was only last March that we finally got to organize a visit along with a friend and our nephew.

Getting to the port at San Pascual is hardly a walk in the park. It involves an 8 to 9-hour bus ride, a 45-minute van ride and a 2-hour ferry boat ride, not to mention the taxi and trike transfers. From the port we needed to take another ride to our resort: the Atlaza Resort at Barangay Laurente. At the resort, however, the tranquil beach scene was a welcome sight after our exacting trip. 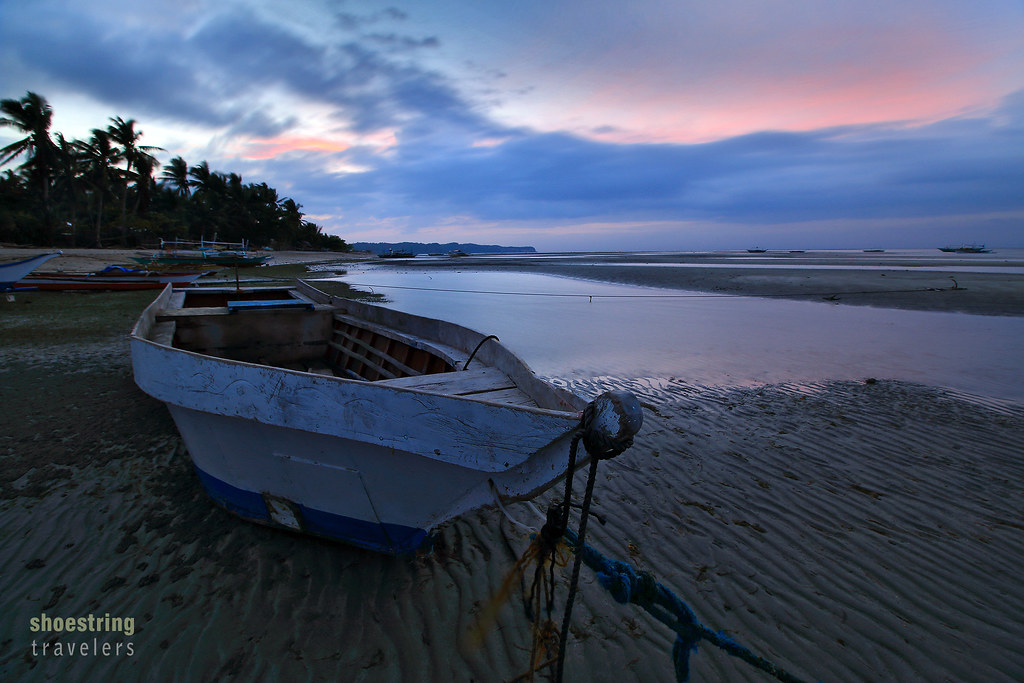 We sometimes cram too many things to do and places to visit on a particular trip but on the day we arrived we just took it easy, wandering around the beach in front of the resort and enjoying the sunset.

Our second day at San Pascual was supposed to be the highlight of our visit here – the day of our island-hopping to the islets of Animasola, Tinalisayan and Sombrero. Our rented boat picked us up right in front of our resort; the nearest and the first island on our itinerary was Animasola with its fascinating rock formations, crystal-clear waters and a natural swimming pool.

Second on the list was Tinalisayan, an islet surrounded by white sand with a slab of rust-colored sandstone and a gorgeous sandbar at one end. Crystal-clear turquoise waters added to the beauty of this island gem which we reached in about an hour’s boat ride from Animasola. Tinalisayan is actually the closest of the 3 islands from San Pascual town (only about 30 minutes away by boat).

Last on our list was the biggest island of the three – Sombrero Island. Like Tinalisayan, this island also has white sand and clear turquoise waters. A hat-shaped islet (actually a rock outcrop) lies in close proximity to the larger mass of Sombrero; it’s this hat-shaped islet that gave Sombrero its name.

We had originally planned to return to our resort from Sombrero Island but when we realized it would take almost two hours by boat (and with the waves getting stronger by the minute) we decided to sail to the port at San Pascual town proper instead. We arrived at the port in less than an hour and would have headed back to our resort by trike but decided to take the opportunity to visit a house and its remarkable occupants along the way.

Visitors can go inside the basement and even encounter the birds in person. The odor produced by the birds inside was overpowering; we had to wear face masks provided by our hosts to combat the strong stench. We were also quite wary about disturbing the birds but it seemed that they were not perturbed at all by humans in their midst. The caretakers at the Balinsasayaw House revealed that the nests produced by the birds are the highly priced ingredients for making birds’ nest soup or nido soup. These nests can fetch up to $10,000 a kilo! (These swiftlets are similar to the birds that make their nests up the tall karst formations in El Nido and Coron, Palawan.) They harvest the nests after the eggs have hatched and the young birds have grown up and flown away.

Our last day at San Pascual was spent unwinding at the beach in front of our resort and chatting with some members of the fishing community nearby. Before proceeding to the port for our return ferry to Pasacao town and on to Naga City for our bus ride home, we dropped by the San Pascual Baylon Parish Church – said to be one of the oldest churches in the Philippines. Many people believe that it was built in the 16th century – at just about the same time as the San Agustin Church in Intramuros, Manila. Most of the original structure is long gone but the façade is said to be the remaining original part of the structure.

If coming from Metro Manila take a bus (DLTB, Penafrancia Tours, Isarog Lines, RSL, Philtranco, Raymond) to Naga City. Travel time is 8-9 hours (and mostly by night) and the fare ranges from P700 – 1200. In our case we got a Penafrancia Deluxe bus (3 seats in a row and with an onboard comfort room) for P1,000. You can also take a plane to Naga if you want to cut down the travel time.

Buses will drop you at the CBD terminal at Naga City from where you can ride a trike to the North bound terminal where you may get a van bound for the port town of Pasacao (45 minutes, P70 fare).

At Pasacao get a ferry bound for San Pascual, Burias Island. The boat schedule sometimes changes but at the time we were there ferries left the port for San Pascual at 6, 7 and 10:30 AM. The ferry ride takes about 2 hours and costs P130.

Accommodations, More Tips and Other Destinations

There are but a few choices for accommodations at San Pascual since the place only began to attract a good number of visitors about two years ago. The newest one is Atlaza Resort in Bgy. Lurente, a few minutes ride by trike from the port. The Sunset View Tourist Inn is located right at the port area (Atlaza and Sunset View have the same owner).  The MSS Fuentes Lodging House is located at the town center. Virjen Island Resort is located at the adjacent Busing Island and one will have to ride a boat to get there. It is also possible to stay overnight at Sombrero Island by bringing a tent or renting one of the huts on the island.

For island-hopping you can go to the tourism office at the port area for help in getting a tour boat. Rates are pretty much fixed: P3,000 for the basic 3-island destinations of Animasola, Tinalisayan and Sombrero. The boatmen would usually ask for an additional P500 for each island added to the tour. In our case, Atlaza Resort contacted a boatman for our tour so we did not have to go to the port to get one.

There are other islands off San Pascual that may be visited besides the 3 that we mentioned earlier. Pulong Dapa or Dapa Island lies close to Sombrero Island, a rocky islet with a small white sand beach. One may climb up its highest point – it’s not really that high – to get a panoramic view of Sombrero Island. Other islands are Arena, Templo, Taguingui, and Busing (closest to San Pascual port and where Virjen Resort lies). Of these Taguingui Island probably deserves the most visit. It lies close to Tinalisayan Island and has a nice white sand beach.

San Pascual also features farms and rolling hills – some of which we passed by on our way to our resort – where cattle can be observed grazing. San Pascual actually has around 15 huge cattle ranches. There are also expansive mangrove areas which are slowly being developed into tourist destinations and a bat sanctuary.

San Pascual has immense tourism potential and we’ve probably only scratched the surface of its possibilities. The best time to visit the place is during the months of March to May when the seas are calmer than at other times during the year. May is also the month when the town hosts the Isla Rancho Festival.

7 thoughts on “San Pascual, Masbate: Gateway to the Island Gems of Burias Island”