We weren’t supposed to be here this early, having just arrived at the port town of Romblon at 6AM. But after trying to catch up on sleep at our hotel, we were startled awake by a sudden brownout. With summer in high gear, we had to leave our hotel room before it got steaming hot inside. With so many beaches on the island, it was a no-brainer where to go to cool down on a hot and dry day.

Talipasak Beach was the first beach on our list here at Romblon Island. With help from our hotel guy we contracted a trike driver to take us on a half day tour of some of the beaches on the island starting with Talipasak which we reached in about 45 minutes from the town proper.

Talipasak is a creamy-white sand beach with crushed corals mixed in with the sand. The sea bed drops down gradually and the water is clear and calm, making the beach ideal for swimming. Snorkeling is another activity you can enjoy here; there are several corals not too far from shore.

There’s a resort here: the San Pedro Beach Resort which has become so synonymous with Talipasak Beach that the latter is sometimes referred to as San Pedro Beach. Like its counterpart at Tiamban Beach, San Padre Beach Resort has managed to blend in with the surrounding environment. There’s lush vegetation here, including several trees, affording plenty of shade from the hot noonday sun. 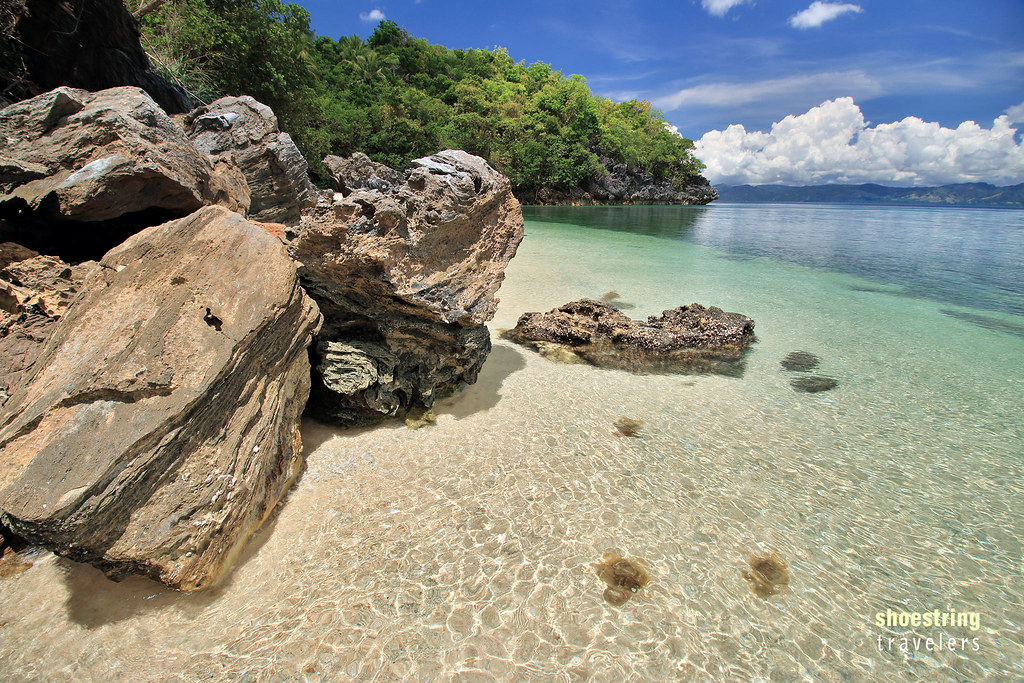 While most visitors kept to that section of the beach in front of the restaurant, we trudged on a little further to the south where rock formations begin to dominate the beach landscape. After rounding out a section of rocks past some of the resort’s cottages by the beach, we realized that there is a small stretch of beautiful white sand beach at the edge of the resort. There were no people here and it served as a perfect spot for some moments of serenity.

While taking photos of the rocks here and at the southern section of the beach we belatedly realized that several of these rocks are actually marble. Romblon is known as the marble capital of the country, so it shouldn’t have come as a surprise. But having been used to seeing coral or karst rocks as part of a beach landscape so typical of the country, we were a bit surprised about seeing a considerably expensive type of rock lying all over the beach… and being left alone by people.

We had a relaxing time at Talipasak, resting under the canopy of trees after swimming, snorkeling and taking a hearty lunch at San Pedro Beach Resort’s restaurant. An hour after lunch we were ready to move on to our next beach.

Talipasak is about 13 kilometers away from downtown Romblon. You can hail a trike for 2-3 people at P200, one-way. You can ask the trike driver to pick you up on the way back for another P200. You might have to do the latter since Talipasak Beach is only accessible via an interior road and is not along the main highway unlike Tiamban and Bonbon Beach where you can take a chance and hail passing trikes for a lesser fare.

There are trike drivers that will offer to tour you around the town’s beaches and other destinations in and around town at P1,000 for the whole day. In our case, we agreed to P700 for touring Talipasak, Tiamban and Margie’s Beaches.

You can also choose to stay overnight at Talipasak Beach – the San Pedro Beach Resort has native hut/cottage accommodations with fan. Rooms have 2 single beds each and cost P800. The resort also has a restaurant that serves meals are at a reasonable P120 to P200 rate.

Visit this page for more pictures of Talipasak Beach

3 thoughts on “Talipasak Beach on a Hot Summer’s Day”