It was a sunny April morning with an almost cloudless blue sky. Just the perfect weather for exploring the islands lying south of the port of Coron town in Busuanga, Palawan. Hopping aboard our motorized outrigger, we were eagerly looking forward to a whole day of island-hopping and beach bumming. But then, just 15 minutes into our ride we started encountering huge waves that drenched everyone in the boat. Soon our vessel was doing a scary roller coaster ride along the thoroughly agitated waters of Coron Bay.

One of the motorized outriggers that made the trip with us to Bulog Dos Island in Coron, Palawan

One of the things we’ve observed in our years of travel is that many of the most beautiful, most well-preserved and most exotic destinations are often the most difficult to reach. Early on we had come to accept the risks that travel to those places bring as hazards that we had to endure. But over time we realized that the journey in itself was just as enriching, fulfilling and, in some cases, more enjoyable than the destination. 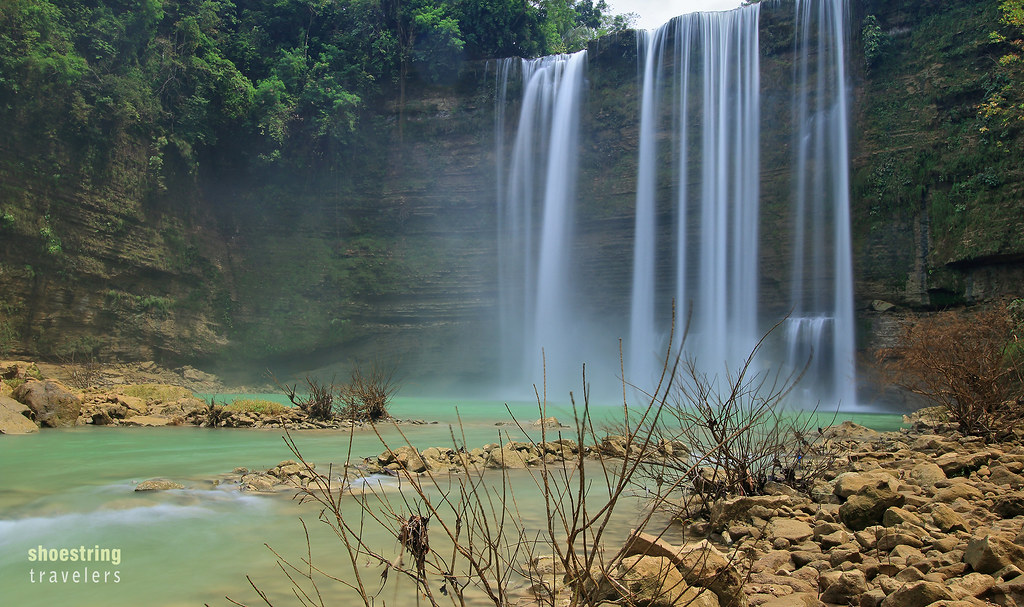 Niludhan Falls in Negros Oriental used to be a little-known and remote destination until recently; paved roads have lured more visitors the last 2 years

Our travels in recent years in our home country, the Philippines, are no exception. Especially so since many of those trips were to destinations that are off-the-beaten-track with accessibility problems of varying degrees. Here are some of the challenges we experienced. 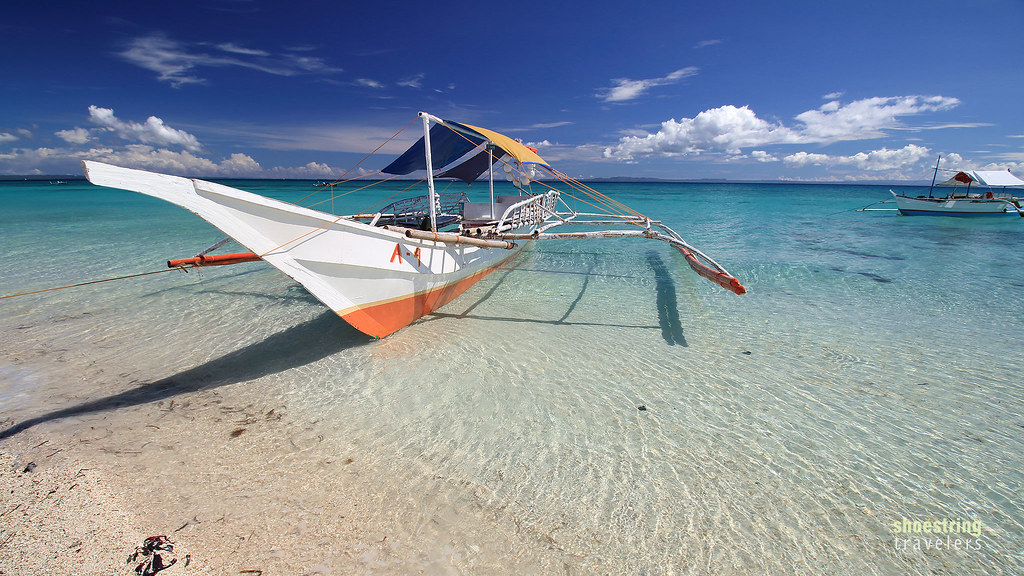 Many of our travels were to beautiful remote islands where the only option is to take a boat. Such boats are usually the ubiquitous outrigger banca with a motor. We are quite choosy when it comes to scheduling trips of this sort. We do it normally during the dry, hot months of March to May to avoid the monsoon seasons when the waves could really be rough and dangerous. But as in the aforementioned boat ride in Coron, this is no guarantee. In a visit to Boracay Island years ago one of our fellow travelers fell into the water when the big boat we were riding chanced upon 10 to 15-feet waves. In sunny weather. Fortunately the guy was a good swimmer and the boat crew was able to throw him a line quickly. 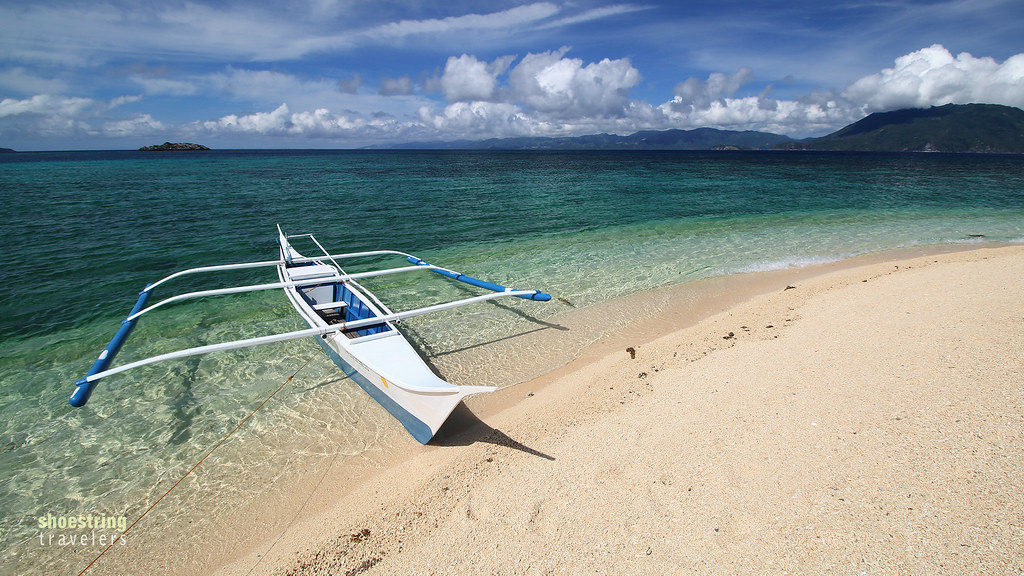 Several of these island destinations lie outside the tourist radar with the result that there are no regulations in place to protect the traveler. Most of our early boat trips were provided by fishermen seeking to supplement their meager earnings. The boats were usually small, there were no life vests and seating was cramped. During our island-hopping in Romblon Island last year, we wanted to visit a hidden pool surrounded by towering rock formations at Cobrador Island. But the huge waves prevented us from landing on the rocky beach and gave us quite a scare as we did not have any life vests on board. All the while one of our boatmen was standing nonchalantly at the front end of the boat, seemingly unaffected by the rough ride. So we thought that if it was safe enough for him then it was safe enough for us. Problem solved.

Another challenge in reaching remote or off-the-beaten-path destinations is the state of roads leading to those places. Our first trip to the beautiful seaside village of Tambobong in Dasol, Pangasinan took us through perhaps the roughest road we’ve encountered in living memory, eclipsing even the rough ride we’ve had to the Kbal Chhay Waterfalls near Sihanoukville in Cambodia several years back. The road looked like it had been concreted long ago but lack of maintenance broke it up into very rough and rocky sections. Plodding along at 5-10 kilometers per hour, we were genuinely scared for the poor car and were crossing our fingers we wouldn’t have more than one flat tire. Maybe as a cruel joke the end of the road on the entrance to the village was marked by – of all things – a vulcanizing shop. Fortunately this road has since been re-concreted and it’s now much more comfortable to travel on. Some roads in the interior are paved alright but quite narrow – more suited to one-way traffic. When that happens we have to give way to traffic going the other way – if there was a shoulder where you can safely stop at. Fortunately Google Maps’ street view now give us a good idea of the width of these roadways but a few years ago you wouldn’t have any clue until you actually drove on them. And using Waze or Google Maps doesn’t guarantee a trouble-free ride either. On a recent trip to the Pantihan Falls in Maragondon, Cavite, Waze made us take a detour – ostensibly to avoid traffic congestion on the main road – only to drive on the narrowest of roads elevated high over the surrounding rice fields. It was impossible to give way had we met even just a motorbike going the opposite direction. 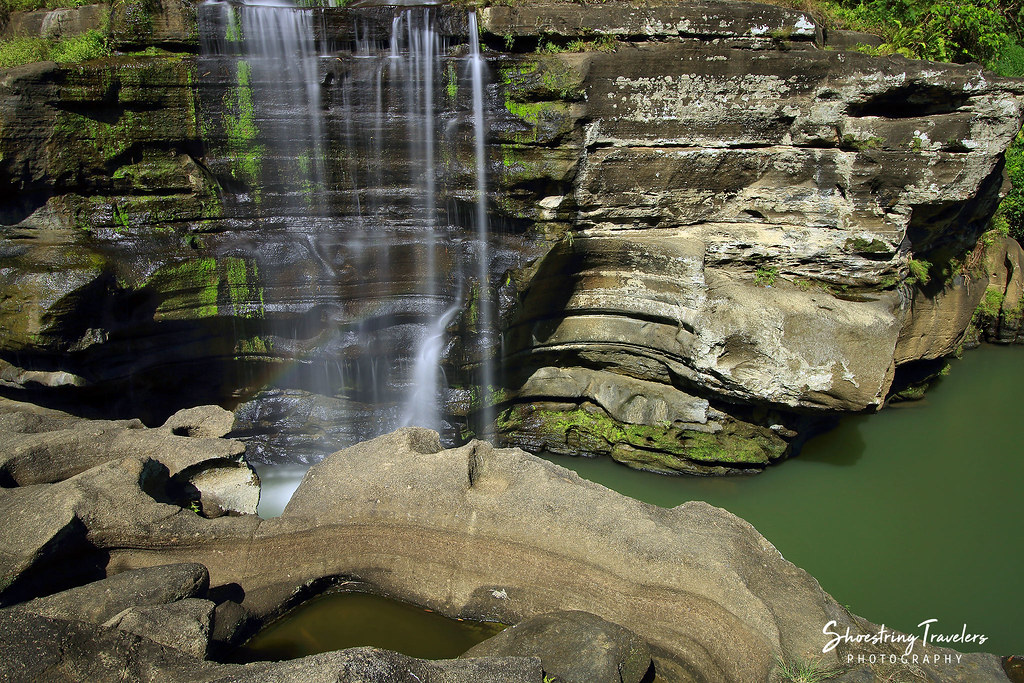 We’re not mountaineers and the last height any of us had ever conquered was the razorback at Batulao – by Leo during his senior high. Unfortunately, we’ve had to trek up some pretty steep slopes, slog through muddy ground uphill, walk over slippery boulders or try to find our way through trails almost concealed by heavy vegetation to reach that beautiful waterfall or scenic viewpoint on gimpy knees.

The last leg of the trail to Bukal Falls, Majayjay, Laguna

Frankly we’re beginning to again enjoy these kind of treks such as the ones we’ve done to reach some of the waterfalls in Laguna very recently (part of a lifestyle regimen we’ve adopted to help alleviate our health conditions). But that hadn’t always been the case. About two years ago we took love ones and friends on a hike to Aliw Falls in Luisiana, Laguna. We’ve done this trek before and it was one of the easiest – a 15-minute easy hike with trees providing plenty of shade. Unfortunately, it had rained the previous night and as a result we ended up leading our group through an extremely muddy and slippery trail where we had to go barefoot at one point. Nina lost her pair of older sandals when a strap broke. Surprisingly, her older brother – a senior whom we thought wasn’t too fond about trekking – remarked that he enjoyed the experience. “It’s much more fulfilling when you have to sweat for something,” was his remark. So true! In retrospect it had actually become an enjoyable experience. 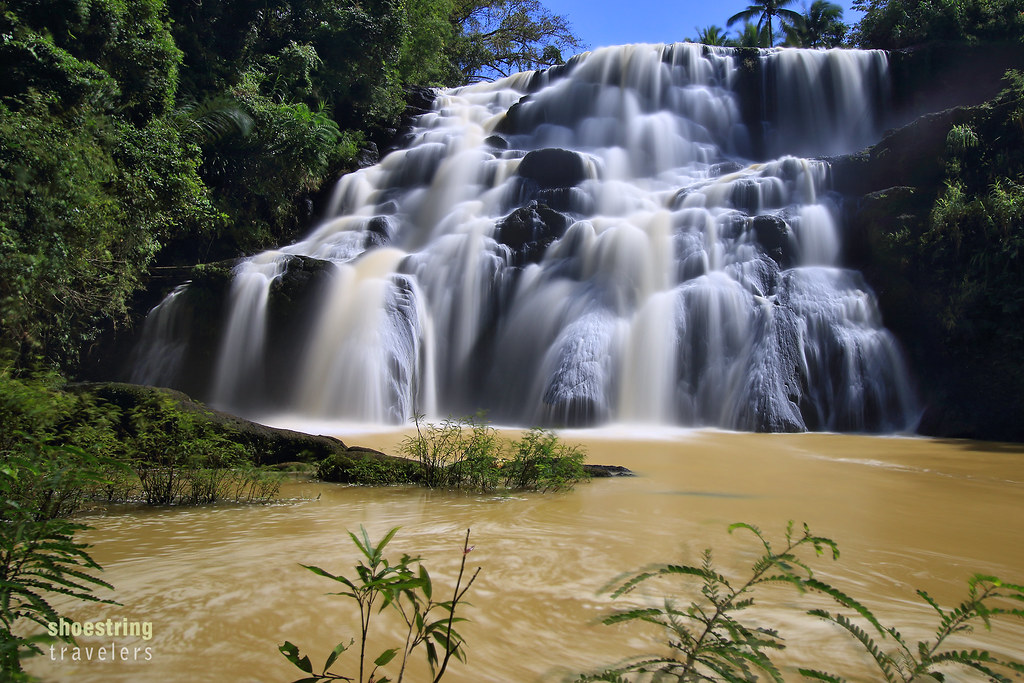 Aliw Falls in Laguna was worth the muddy slog. Note the color of the water.

One of the reasons why some stunning destinations here in the Philippines have remained well outside the tourist radar is because of perceived peace and order problems. International visitors would usually avoid Mindanao thinking that there are Islamic radicals in the whole place, although these groups operate in just a few remote places there.

Three decades ago, no one would even think of venturing into some of the more remote areas in the Bicol Region – some of them strongholds for units of the communist New People’s Army (NPA). And so, when we decided to visit the at-the-time remote Caramoan Peninsula in Camarines Sur and the beaches in Matnog, Sorsogon, well-meaning love ones cautioned us about both places. There were no leftist rebels in both places, however. There were even French tourists and an Israeli TV crew in Caramoan (it had been featured the previous year in the French version of the reality show Survivor).

When friends learned about our plan to visit Siquijor, they warned us about occult practices in the island province. Some even recounted strange supernatural phenomena they had encountered there. But although there are spiritists and faith healers on the island, we did not encounter anything scary during our time there.

While the aforementioned challenges are things we are willing to put up with – even possibly enjoy – the sorry behavior of some of our hosts is the biggest turn-off and one we can do well without.

After an overnight trip to Banaue, Ifugao, we hailed a jeepney ferrying tourists to Sagada and agreed with the driver that he would come back for us after 3 days. On the third day we waited and waited for him. When we finally got in touch with him by cell phone he came up with a host of reasons why he could only come back for us if we paid a higher amount. The guy practically blackmailed us since there was no other public ride available by the time we got to talk to him and we had to be back in Manila the following morning.

Fortunately, encounters such as the one we’ve had at Sagada are few and far-between. There are times when we felt that transportation or accommodation charges are a bit too high, especially boat fares during island-hopping, but otherwise we didn’t feel that our hosts were always trying to rip us off.

Locals can be very helpful too. During a tiring hike to one of the waterfalls in Biliran, a passing farmer offered us bananas from his haul. When we pulled out a few pesos for payment, he was surprised, and declined saying it was for free. We were his guests, he said. The following day, locals at Higatangan Island happily shared their coconut salad with us – again for free. These folks were making salad on the spot after harvesting coconuts from palms right there on the beach. Perhaps more than the freshness of the newly harvested coconuts it was the hospitality of these folks that made it the most delicious buko or coconut salad we’ve ever had.

Reflecting back on our adventures and misadventures, it was such encounters with local folks that made our trips memorable, more so than any other factor. Sometimes we’d like to think that our Father intentionally placed people in our path so that we’d end up blessing each other. During our first trip to Cagbalete Island in Mauban, Quezon we were introduced to Rose, a local tour guide. Rose was very helpful and genuinely looked after our needs. We were so delighted with her services that we mentioned her and her phone number at a blog post in our old website. When we returned to Cagbalete 3 years later and met her, she was in tears, grateful for the many visitors that called to avail of her services. Because of that she was able to buy two boats that she rented out for island-hopping, and eventually got to build a house and a store to boot. 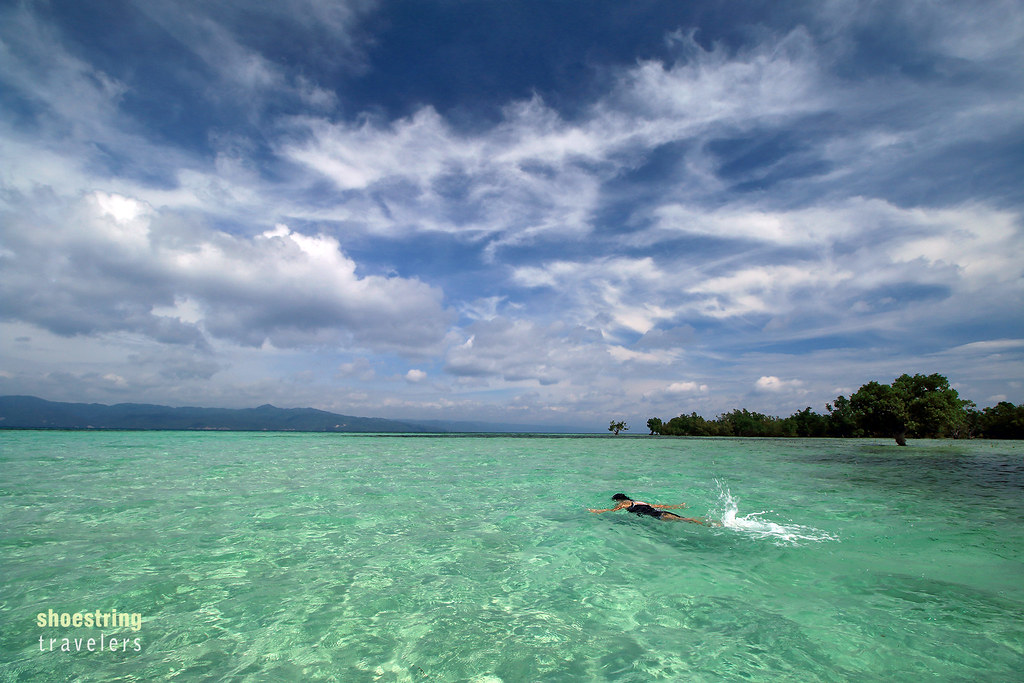 We’d like to think that our travels are just reflective of our larger journey in life. It’s not a journey that we make on our own but rather one that we make with God and the people that He has brought into our lives. And our perspectives, attitudes and behavior towards these co-sojourners help decide if the trip is going to be worthwhile.